Backdraft: Affirmative Action for White Men in the LAFD 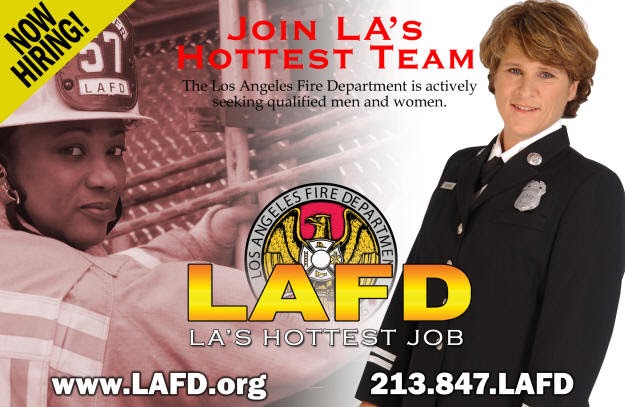 
When conservatives condemn affirmative action they typically focus on mythical assumptions of merit, level playing fields and unlimited opportunity.  Affirmative action, as the cliché goes, is a road littered with white male victims cheated of their rightful place atop the hiring food chain by unqualified minorities.  Public sector employment, with its entitled multicultural workforce, greedy unions and overly generous benefits is supposed to be a prime example of the wrongheadedness of affirmative action.  Yet one of the most insidious ways that white male affirmative action is institutionalized is through hiring advantages in elite fields that have historically been hostile to people of color and white women.  White males in management groom, mentor and promote other white males, boosting their access to higher salaries, greater job stability, home ownership, retirement benefits and quality educations for their children.


A prime example of this is the Los Angeles Fire Department, an elite enclave that remains a bastion of unchecked white male mobility.  For the past two years, the LAFD, poster child for public sector affirmative action for white men, has been embroiled in a cheating scandal around illegal access to hiring and promotional exams.  White male firefighters routinely circulated exam questions and answers to friends and relatives.  Company emails alerting relatives to strict submission guidelines were widely distributed while coaching sessions for relatives were even held at a city fire station.  As a result, the relatives of employees were more likely to score higher on the exams and be hired for these prestigious, highly paid positions.  The number of sons of long time employees in the department exceeded that of women firefighters overall by five times.  Twenty percent of new LAFD recruits have a relative in the department.   Criticizing the LAFD’s 2014 recruiting process political analyst Susan Estrich noted, “The Los Angeles Fire Department began training its first class of recruits in five years — 70 in all, 69 men and one woman. Sixty percent of the recruit class is white, compared to 29 percent of the city. Overall, the department has been 3 percent female since 1995.”  Citing personal reasons, the lone woman in the class ultimately dropped out.  In many departments women firefighters contend with a boy’s club culture of harassment, intimidation, belittlement, isolation and virtually non-existent paths to promotion.

In mainstream lore, firefighting jobs are typically portrayed as being the province of a small elite who demonstrate physical strength, courage, sound judgment and (that ever elusive and subjective quality) “character”.  From the all-American fireman snagging a child’s cat from a tree to the valiant he-men first responders glorified in the aftermath of 9/11, whiteness and heterosexual manliness have always been the implicit criteria for being firefighters.  Ensuring public safety is supposedly the prerogative and right of these stalwart examples of masculinity.  Yet the overwhelming majority of fire department service calls are for medical care—not rescue from burning buildings.


While law enforcement has made slow progress toward diversification, fire departments nationwide also remain stubbornly white and male, with women representing less than 4% of the workforce.  Six percent of women firefighters are African American (Teresa DeLoach-Reed of Oakland is the first black woman ever to lead a fire department.  The first documented black woman to serve as a firefighter was a slave named Molly Williams in New York City).  Similar to the LAFD, the “guild-like structure” in the firefighting profession overall has preserved the intergenerational succession of white male relatives. In addition, “Recruitment, training and leadership have helped to honor and preserve lineages that favor bigger, stronger firefighters.”


Daryl Osby, the African American head of the L.A. County Fire Department, recently announced an anti-nepotism program to crack down on the number of relatives who get hired in the department, as well as reform favoritism in promotions and performance evaluations.


Despite these clear assaults on “meritocracy” there has been no backlash from the right wing.  Fox News and other staunch affirmative action opponents in the GOP have not descended on the LAFD decrying preferential treatment or the end of meritocracy as we know it.  True to Ronald Reagan’s old “faux pas” that “facts are stupid things”, empirical data have never fazed the GOP in its relentless demonization of affirmative action for people of color.  Documentation of the targeting of African Americans and Latinos by subprime and predatory mortgage lenders or the recent Department of Justice report on systemic discrimination against African Americans by the Ferguson police department never register in the GOP’s calculus because they contradict the white supremacist myth of the American dream.  The right wing’s destructive propaganda about bootstraps enterprise and rugged individualism is one of the greatest cancers on American public policy.  At every step of the way whites benefit from unearned advantages and privileges that people of color will never have access to.  Two major ways white working and middle class folk accumulate wealth is by capitalizing on the connections of family members in elite high-paying fields as well as by drawing on family/household wealth (i.e., property, small businesses, stocks/bonds, savings, retirement plans, 401Ks) through inheritance.  The decades’ long institutionalization of white supremacy in fire departments underscores how the racial wealth gap gets played out in the rhetoric of Americana public safety.
Sikivu Hutchinson is the author of Godless Americana: Race and Religious Rebels.  Twitter