Who fits the stereotype of scientific or mathematical genius? Traditionally, racial and gender stereotypes influence who "conforms" to mainstream society's image of scientific proficiency and intellectualism. Although one of the most well known contemporary scientists in the world is African American physicist Neil DeGrasse Tyson, the dominant culture still portrays science and math as disciplines that only white and Asian males can master.

At 12% of the U.S. population, African Americans are severely under-represented in the science, technology, engineering and mathematics (STEM) fields. According to the National Center for Education Statistics, "The percentage of African-Americans earning STEM degrees has fallen during the last decade. In 2009, they received just 7 percent of all STEM bachelor's degrees, 4 percent of master's degrees, and 2 percent of PhDs." Indeed, "in a typical year, 13 African-Americans and 20 Latinos of either sex receive Ph.D.’s in physics." This disparity is informed by the egregiously low number of black students taking college preparation, honors and Advanced Placement classes and tests. For African American students, the absence of quality college prep instruction at the middle and high school levels is often one of the most significant roadblocks to college access. For example, at Gardena High School in South Los Angeles African American students are 27% of the population but only 4% are enrolled in AP classes.

In a recent New York Times article entitled "Why are There Still So Few Women in Science?" Author Eileen Pollack reflected on attending a Yale University event where five female physics majors talked about their academic challenges. She noted that one "young black woman told me she did her undergraduate work at a historically black college, then entered a master’s program designed to help minority students develop the research skills and one-on-one mentoring relationships that would help them make the transition to a Ph.D. program. Her first year at Yale was rough, but her mentors helped her through."

Finding mentors, navigating the complexities of subject requirements and keeping afloat academically are a natural part of being in college. But these challenges are often even more daunting for African American students in STEM departments where there are few African American faculty and administrators. For many black students, the absence of tenured black STEM professors exacerbates the racist and sexist low expectations that they confront in the classroom and on campus.

On Thursday, November 14th at Gardena High at 11:00, Black Skeptics Los Angeles and the Women's Leadership Project will sponsor a seminar that examines these issues with a panel of talented young Black STEM professionals from South Los Angeles. Seminar participants will discuss college preparation, admission, mentoring, retention, confronting discrimination and their path to graduation.

Brandon Bell is a 2007 graduate of King-Drew Medical Magnet and a 2011 graduate of Princeton University where he majored in molecular biology. He's the founder of an activist organization called Wisdom From The Field and has dedicated himself to the empowerment of his community

Garaudy Etienne graduated from King-Drew Medical Magnet in 2011. He is currently an aerospace engineer at Northrop Grumman. He received his B.S. in Aerospace Engineering from Princeton University in 2011

Devin Waller is Exhibit Project Manager at the California Science Center. She received her B.S. in astrophysics from UCLA and her M.S. in Geological Sciences from Arizona State University.
Posted by Sikivu at 10:20 AM

Secular Woman of the Year 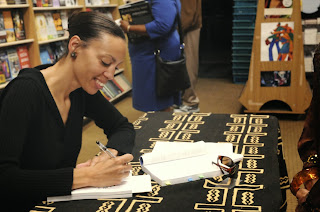 I'm honored to be recognized as the Secular Woman of the Year by Secular Woman,an organization dedicated to "amplifying the voice, presence, and influence of non-religious women":

"Sikivu Hutchinson was chosen as Woman of the Year due to her being a radical humanist activist, educator, and writer who advocates for social justice within academic and atheist movement circles, while putting her theories into practice in her own community of Los Angeles. She is a beacon for secular women throughout the world. In 2013 she released her latest book: Godless Americana: Race & Religious Rebels.

She is an editor at blackfemlens.org and freethoughtblogs.com/blackskeptics.org. She can also be found through her own website www.sikivuhutchinson.com and through the organization www.blackskepticsla.org. Also, be sure to check out her previous book, Moral Combat: Black Atheists, Gender Politics, and the Values Wars. Sikivu is also involved in the Women’s Leadership Project which is is a feminist service learning program designed to educate and train young middle and high school age women in South Los Angeles to take ownership of their school-communities."

On Valentine Road, Race and the Murder of Lawrence King 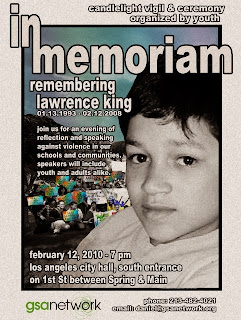 It isn’t until the end of the new HBO documentary film Valentine Road, the gut-wrenching chronicle of the 2008 classroom murder of 15 year-old Lawrence King, a homeless gay youth of color, that the viewer learns the significance of the film’s name. Valentine Road is the location of King’s Oxnard, California grave, the final resting place of a caring, intelligent child whose death became a lightning rod for a racist homophobic heterosexist nation ill-equipped to see much less affirm King's personhood. Place is a central character in this film, which dubiously frames King and white working class “boy next door” murderer Brandon McInerney as bookends in an American tragedy set in multicultural Oxnard. The film opens with a slowly unfolding collage of the moments leading up to King’s execution in a classroom at E.O. Green Middle School. We are treated to the sterile interior of the school, the gray tyranny of the computer lab where King was shot at point blank range, the blood-soaked floor that cradled King's head after the shooting. Throughout the film King is represented in still photos, in the blurred fleeting footage of a campus security camera, in whimsical stylized animation that attempts to capture King's transition from Larry to Lakisha/Latonya(which friends say was her preferred identity before her death). The recollections of schoolmates, teachers, social workers and a foster parent touch on her fragility and kind-heartedness, yet in many of these testimonies her emerging identity is reduced to the “ungainly” performance of “cross-dressing”, crudely applied makeup, and awkward high heel boots. It is clear that King’s “inappropriate” gender expression was construed by the school as an embarrassment, a behavior problem that school administrators sought to contain with vapid compliance memos which downplayed the culture of structural violence against LGBTQ youth.

While King’s narrative plays out in fragments, the narrative of 14 year-old McInerney is vividly nuanced. The product of a violent home, McInerney’s drug-addicted mother and homicidal gun-toting father appear as deeply flawed yet loving. When he is cross-examined after the murder by a police detective he is treated with dignity, respect, and sensitivity. When his case is taken up by two “juvenile justice” advocate attorneys enraged that he may be tried as an adult, the female half of the duo expresses her devotion and undying love for his so-called beautiful spirit.

In this regard Valentine Road ably, perhaps inadvertently, captures how the criminalization of people of color shapes American presumptions of white innocence. Despite McInerney’s apparent fondness for Nazi paraphernalia and use of racial slurs to refer to black classmates, prosecutors dropped a hate crime charge against him. His defense team trotted out the repugnant “gay panic” defense (which was prohibited for use in criminal trials under a 2006 California law named after Gwen Araujo, a transgender teen brutally murdered in 2002) egregiously portraying McInerney as a victim of King’s unrelenting sexual harassment. Unable to reach a unanimous verdict, the jury in McInerney’s first trial deadlocked. Some of the jurors voted for voluntary manslaughter and others for first-degree or second-degree murder. After the mistrial, the filmmakers shot telling footage of white female jurors expressing sympathy for McInerney over pastries in a spacious suburban kitchen. In their minds King was clearly the aggressor; the dark sexual predator whose moral deviance sent the troubled young white boy into a (justifiably) murderous tailspin. Indeed, at least one of the jurors mailed prosecutors Religious Right propaganda excoriating the “abomination” of King’s sexuality and the injustice of “poor Brandon’s” plight. And in a show of motherly solidarity, the white female jurors even display “justice for Brandon” slogans.

In order for white hetero-normativity and heterosexism to flourish, violent masculinity must be fiercely protected by white women. The recurring theme of straight white innocence is one of the film’s most powerful subtexts. At every turn McInerney is humanized and contextualized; redemptively positioned as a son, boyfriend, brother, lost boy, conflicted student and victim of abject circumstances that were beyond his control. As per the national narratives of so many young white high profile murderers—from the Columbine shooters to Newtown killer Adam Lanza—we are carefully guided through McInerney’s world and made to “understand” his emotional turmoil and “damaged” psyche. While McInerney’s family members testify to his horrible upbringing the filmmakers do not include interviews (save for one that was conducted with a short term foster parent) with King’s family members, guardians or adoptive parents, Gregory and Dawn King. The film never attempts to place King’s homelessness, her foster care status, biracial cultural background and history of sexual abuse in the broader context of systemic disenfranchisement of queer and trans youth of color. We learn from a classmate’s passing reference that King was “part-black” and that she strongly identified with and perhaps saw herself as an African American girl. Yet the implications of her biracial ancestry are never seriously explored with respect to the jury’s biases.

Aside from Dawn Boldrin, the instructor (who was subsequently terminated) who attempted to counsel and mentor King through her transition, many of the adults at the school policed and pathologized her behavior. Throughout the film, King’s queer and trans Latino classmates comment on the impact of her murder and how it influenced their own courageous struggles for empowerment. In one of the film’s most glaring oversights, it is unclear what, if anything, the school and district did in the aftermath of King’s murder to address the culture of institutionalized racism, homophobia and transphobia that contributed to her death.

After the outrage of the mistrial, McInerney eventually received a 21 year sentence for murdering King. He will be released at the age of 39. One of the final scenes shows him rejoicing in juvenile detention with his family after receiving his high school diploma—a beneficiary of the criminal justice system’s devaluation of black queer and transgender lives. Despite the advocacy of King’s friends there is still no monument to or recognition of her at E.O. Green Middle School.