Airbrushing Race out of Income Inequality 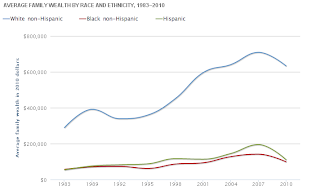 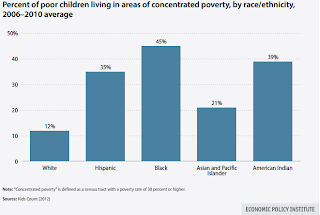 “This is the worst I’ve seen it in a long time,” Cecil McLinn, the principal of Duke Ellington Continuation School in South Los Angeles, told me recently after one of our students missed a week of school because she didn’t have shoes. A highly-regarded administrator and longtime advocate in South L.A., McLinn has been on the frontlines of progressive education for several decades. As the economic depression in our community deepens he’s had to fill out more housing relief forms and aid vouchers for students who struggle just to make it to school every day. Activist administrators like McLinn know that their schools fill vital resource gaps in social welfare, health care and economic aid assistance for poor and working class families. Because of racial disparities in wealth, schools are especially important as social welfare centers and safe zones for black and Latino children. In L.A. County, black children comprise fifty per cent of the homeless youth population and thirty per cent of foster care youth. Foster care youth are disproportionately more likely to be incarcerated, drop out of school and experience teen pregnancy. According to the Economic Policy Institute, 45% of black youth in the U.S. and 35% of Latino youth, versus 12% of white youth, live in communities of “concentrated poverty”.

Duke Ellington is located at the edge of Westmont, a predominantly black and Latino high poverty community. Westmont was recently the subject of an extensive L.A. Times report, cited as having one of the highest homicide rates in a city where violent crime is purportedly decreasing. Latino and African American males between 17 and 25 are the main victims of murder-violence in the neighborhood. The majority of the businesses in the immediate community offer minimum to sub minimum wage non-unionized retail jobs with no benefits. Nonetheless, a recent L.A. City Council proposal to boost the minimum wage to $15 (potentially the highest in the nation) would only target hotel workers. Most of these workers commute long distances to wealthier neighborhoods on the Westside and downtown Los Angeles.

Some liberal and progressive pundits are fond of trotting out the term income inequality to support their thesis that class immobility represents the deepest divide in American society. Echoing President Obama’s Middle America-appeasing claim that income inequality is as much about class as it is about race, these pundits assiduously avoid the role institutional racism and white supremacy play in economic injustice. In the shadow of the 2016 presidential election, the catch-all “income inequality” has become the national bromide du jour. As his term aiding and abetting the Wall Street robber barons draws to a close, Obama has belatedly homed in on income inequality in an effort to deflect from slumping poll numbers and mounting left/liberal disillusion. But lost in the political rhetoric from the White House and mainstream media is any true focus on the deep racial fissures that drive income inequality. Income inequality doesn’t begin to address the enormous economic gulf that exists between white America and people of color. Black “wealth” was virtually wiped out by the mortgage debacle. The vast majority of black wealth comes from home equity—equity that has long been undermined by deeply entrenched de facto segregation. Whites of all income levels have greater investments in stocks, bonds, mutual funds, retirement accounts, benefits and income-generating property. So the racial homogenization of the term “income inequality” masks the racial roots of economic apartheid. For example, middle class African Americans and Latinos are disproportionately concentrated in high poverty areas with lower property values than are working class whites. This has more to do with the legacy of restrictive covenants and discriminatory lending policies than simple income inequality. Income inequality does not account for why African American and Latino homebuyers with good credit, middle class incomes and stable jobs were systematically targeted by Wells Fargo, Countrywide and Bank of America for subprime home loans. Income inequality also does not account for why LGBTQ workers of color have among the lowest wages, greatest incidences of workplace discrimination and least access to equitable housing, education and health care.

According to Oxfam, “The percentage of income held by the richest 1% in the U.S. has grown by nearly 150% since 1980. That small elite has received 95% of wealth created since 2009, after the financial crisis, while the bottom 90% of Americans have become poorer.” The majority of these American oligarchs are white. As Oxfam noted, “Falling taxes for the rich and increased use of tax havens have helped widen income inequality.” Even during the Jim Crow era, when African Americans were subject to domestic terrorism and legally relegated to substandard neighborhoods and facilities, they still had to pay taxes. But tepid proposals to correct egregiously lopsided taxation will not redress the racial devastation that global capitalism, union-busting and deregulation have had on communities of color in a country that desperately wants to airbrush race from income inequality.

Sikivu Hutchinson is founder of the Women’s Leadership Project and author of Godless Americana: Race and Religious Rebels and Moral Combat: Black Atheists, Gender Politics, and the Values Wars.