The Unbearable Whiteness of Secular Studies

By Sikivu Hutchinson
I recently submitted a course proposal entitled “Going Godless: Challenging Faith and Religion in Communities of Color” to a School of Religion at a prominent university in California. After many gyrations, it was shot down due to “lack of funding”. The course focuses on the intersectional politics of secularism, atheism and humanism, as well as the work of secularists of color like Anthony Pinn, Mandisa Thomas, Heina Dadabhoy, Juhem Navarro Rivera, Sincere Kirabo, Candace Gorham and the D.C. group Secular Sistahs. The uptick in Americans identifying as secular Nones has led to the creation of more secular courses, many of which are housed in Religious Studies departments. Despite the much ballyhooed “Rise of the Nones” there is currently only one bonafide Secular Studies department (based at Pitzer College and helmed by secular scholar Phil Zuckerman) in the U.S.

For the most part, Secularism in the American academy is a cobbled together affair, featuring one-off courses dominated by white academics with the book contracts, privilege and ivory tower “cred” to do secular work without worrying about censure or professional ostracism. Although social media bustle with black folks tweeting, blogging and sounding off about embracing atheism; the same handful of white faces preside in the academic industrial complex as “authentic” scholars of the secular, atheist, humanist experience. As a result, scholarship, classes and curricula that capture the lived experiences, politics and world views of secularists of color, especially those of women of color, are still scant to nonexistent. To date, the Humanist Institute is the only organization in the country to feature an online course I developed entitled “Women of Color Beyond Faith”.

Why is it important that secular people of color teach, write and publish book length scholarship, analyses, narratives and fiction on our social history? The hijacking of rock music from the African American composers and musicians who originated the genre is a case in point. African American scholar/historians like Maureen Mahon and Jeffrey Othello are among the few in the white male dominated field of rock and roll musicology and music history. This dearth, combined with the whitewashing of rock by white male critics, musicians and the music industry, has ironically marked the genre as “in-authentically” black. Recent critical works by white writers like Jack Hamilton and Gayle Wald document the travails of African American rock artists in a field black folk pioneered but are now viewed as oxymoronic in (one need look no further than the lily white bands in this year’s crop of Rock and Roll Hall of Fame inductees to see how white supremacy informs the corporate rock establishment). The lockstep association of “black music” with rap, hip hop and R&B continues to marginalize black rock musicians. That said, if it’s black and obscure, white folk will find it, document it, and anthropologically “redeem” it for the masses as valid art and noble artifact. It’s no revelation that white validation is often the primary criterion for legitimizing black cultural production, critical theory or art in the mainstream and in academia. As August Wilson once noted, “Blacks have traditionally had to operate in a situation where whites have set themselves up as custodians of the black experience.”


When it comes to secularism, even when secular people of color appear in academic spaces, the range of lived experience that they are allowed to represent is limited and reductive. The standard caricature that bubbles up into mainstream consciousness is one of smug atheist blacks and Latinos condemning God and Tyler Perry-esque evangelicalism among folk of color. Rejecting religion becomes an end in and of itself, and not merely symbolic of a more politicized belief system based on social justice, ethics, black liberation, black feminism and serving black communities within the context of heightened anti-black state violence, segregation and misogynoir. Because black bodies have always signified an irrational supernaturalism positioned as the antithesis of the Western universal subject, black humanist atheist praxis can upend traditional constructions of racial authenticity and identity.


Similarly, black lived experience, faith and secularism are largely MIA in the literary arts; be it narrative film, theatre or fiction. While questioning faith is a familiar theme in these genres (e.g. in August Wilson’s Ma Rainey’s Black Bottom, Lorraine Hansberry’s Raisin in the Sun and James Baldwin’s Go Tell it On the Mountain), politicized rejection of supernaturalism and religion, as a sustained critical theme in fictional works by black authors, is still rare. Indeed, only the works of Richard Wright (Black Boy and The Outsider) and Nella Larsen (Quicksand) occupy this space of aesthetic and ideological possibility. Often in black cultural production, there is the presumption of faith-based, religious or spiritual world views and experiences that preclude more complex portrayals of black life. The straightjacket of faith, spiritualism and religiosity is particularly problematic when it comes to black women characters who are allowed none of the nuances of belief and individual license afforded “maverick” male characters. Fictional black women who espouse atheism outright are either punished as traitors (Beneatha Younger in Raisin in the Sun) or domesticated and suppressed (Helga Crane in Quicksand).


This brand of gender policing is even more pronounced in mainstream TV and film. Browse the array of popular—often straight-to-video—black films in the few video stores that remain and the majority feature stereotypically melodramatic tropes of sex, faith, relationships and family woes that are presumably designed to appeal to all black women. In his article “Black Atheists in Film and TV”, Black Skeptics Los Angeles writer and attorney D. Frederick Sparks identifies a handful of portrayals, noting the dearth of black women and the latitude allowed black men (a situation reflected in a recent episode of the sitcom Black-ish, which tamely explored the lead characters’ eldest daughter questioning God’s existence).


This erasure will become even more insidious as evangelical Trumpist white America reloads and reboots. The rising tide of reactionary Religious Right legislation against racial justice, LGBTQI rights, women’s rights, reproductive justice, public education and climate change demands concerted response and resistance from secular radicals and progressives. Countering the literary and academic whiteness of secular space and secular studies is another form of critical resistance in this neo-fascist era.

Segregation Now and Forever: Robber Baron DeVos and the Looting of Public Education 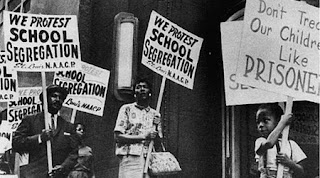 Billionaire Christian conservative Betsy DeVos and her foundation’s robber baron school voucher crusade are inheritors of Wallace’s legacy.  For over a decade, DeVos, President-elect Donald Trump’s pick for Secretary of Education, has been “at the helm” of a largely unsuccessful nationwide push to gut public education through voucher programs. According to the L.A. Times, "California and 36 other states have constitutional provisions—called Blaine amendments—that ban the expenditure of public money on religiously affiliated schools. Close to 80% of private school students attend religious schools, which would be ineligible for vouchers in Blaine amendment states."
As many left-progressive and secular critics have pointed out, a linchpin of the DeVos agenda is an assault on secular education.  The DeVos foundation has bankrolled the ultraconservative, homophobic Family Research Council and sponsored scores of insidious “school choice” bills from Michigan to Wisconsin. It is part of an extensive network of right wing foundations, institutes and think tanks that subscribe to the “dominionist” belief that “Christians must take control over societal and government institutions.”

DeVos’ influence as an architect of checkbook theocracy in education is unparalleled. But it’s important for progressive humanists to understand that DeVos’ reactionary activism is not simply limited to the usual church/state separation issues vis-à-vis science literacy and white Christian fundamentalist efforts to shove creationism down students’ throats.  Certainly, DeVos’ blatant disregard for church/state separation would further undermine science literacy in a nation that routinely ranks at the bottom of global rankings of STEM achievement. Yet, a cornerstone of the Christian right’s privatization agenda is the destruction of racial justice in education and a Dixiecrat return to separate and unequal schools.

The voucher agenda is a byproduct of Southern states’ efforts to circumvent Brown vs. Board of Education’s desegregation mandate.  It was and is a key strategy in the white nationalist/supremacist political arsenal that powered Trump to victory.

Thus, as Secretary of Education, DeVos would most likely steamroll educational justice activists’ efforts to redress the federal government’s neoliberal focus on charter schools, union busting, drill and kill high stakes tests, and the militarization of school campuses.  Under Obama’s former education secretary Arne Duncan, the administration cozied up to charters and implemented wrongheaded policies like Race to the Top, which dubiously tied teacher salaries to students’ performance on standardized tests.   It made noises about shoring up STEM education and academic opportunities for young men of color (while marginalizing girls of color) but allocated a pittance to the enrichment and wraparound programming that could have changed educational outcomes.  And when it came to higher education, Historically Black Colleges and Universities (HBCUs) floundered, scrambling for funding, support and visibility in an administration that gave lip service to improving college access for students of color.  Despite Obama’s “yes we can” multicultural rhetoric, the so-called achievement gap between black and white students has remained static.
Yet, for all of the Obama administration’s education policy failures, the De Vos appointment has the potential to be catastrophic.  It represents a clear and present danger to the wellbeing of scores of students of color who have been most heavily impacted by privatization and the gutting of multicultural education.   Nationwide, African American, Latino and Native American students continue to have the lowest graduation and college-going rates.  They are less likely to be taught by well-qualified teachers and more likely to be in schools where college counselors are either absent or saddled with too many students. Indeed, some urban schools of color have more school police than college counselors.  And because many students of color don’t have equitable access to college preparation curricula in the humanities and STEM disciplines they have higher attrition rates when they go to college.

Low college admission and completion rates correlate with the skyrocketing numbers of African American, Latino and Native American students who are suspended, expelled, pushed out of school and imprisoned in juvenile and adult facilities. There’s no reason to believe that DeVos wouldn’t cosign Trump’s law and order platform and increase federal funding for more police, military hardware and surveillance equipment on school campuses.

The DeVos privatization agenda also bodes ill for undocumented students already facing a precarious future due to Trump’s threat to rescind Obama’s Deferred Action for Childhood Arrivals (DACA) program.  The threat of deportation, homelessness and family upheaval would traumatize already fragile immigrant communities that rely on a patchwork of social services to survive.
Under a Secretary DeVos, multicultural education, reproductive health education and the development of safe and inclusive school climates for LGBTQI students would also come under fire.  The new regime could utilize its bully pulpit to further vilify equitable bathroom policies for transgender students, and the promotion of “abstinence-only” education would most likely be back on the federal table.  Although states would have leeway in pushing back on these policies, a DeVos education department, buttressed by a GOP controlled Congress, could jeopardize federal funding for states and school districts that buck the right wing agenda.

As the NAACP Legal Defense Fund recently noted in its opposition to DeVos’ appointment, “[she] provided funding for the Center for Individual Rights during its legal battle with the University of Michigan over affirmative action.  After the Supreme Court ruled in 2003 to uphold the university’s affirmative action policy…she acknowledged that the motives underlying the policy were proper [but] stated that the policy was still unfair.”

For human rights, social justice and secular education, a DeVos regime in the Education Department would be the proverbial case of the fox guarding the henhouse.

*From the Humanist Magazine, 12-21 issue