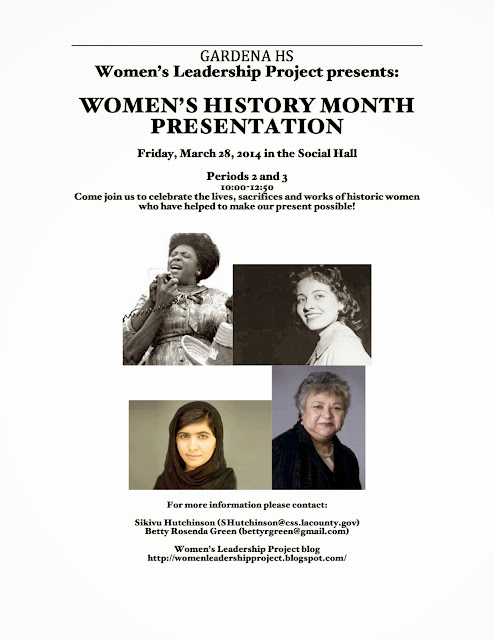 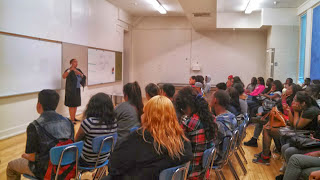 From The Feminist Wire

On Friday, March 7, 2014, TFW Associate Editor Aishah Shahidah Simmons gave a presentation on the importance of naming and ending sexual violence with approximately 50 African-American and Latino students from Washington Prep High School and Duke Ellington Continuation School’s Women of Color in the U.S. class in South Los Angeles. This International Women’s Day (IWD) presentation was conceived and organized by TFW’s Contributing Editor Sikivu Hutchinson who is an award-winning author, senior intergroup specialist for the Los Angeles County Human Relations Commission, and founder of the Women’s Leadership Project (WLP), a high school feminist mentoring program. While WLP’s focus is on girls, this IWD presentation was mixed gender because sexual violence impacts everyone directly and/or indirectly...www.thefeministwire.com
Posted by Sikivu at 8:44 AM 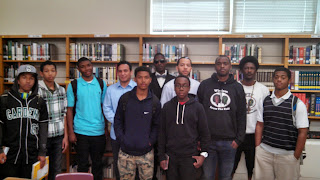 According to GOP Congressman Paul Ryan, an insidious “inner city culture” has prevented “generations” of “inner city” men from seeking jobs. Evoking the ghost of the GOP past, present and future, shiftless lazy black men with no work ethic are to blame for the high rates of unemployment in the U.S.’ "ghettoes". Ryan’s comments were no doubt a desperate attempt to stay relevant and on message after not receiving an invitation to be grand dragon (marshal) of the “nationwide” White Man March.

A few weeks before Ryan trotted out his Black Pathology 101 thesis, President Obama announced that the administration would spearhead a “Brother’s Keeper” initiative to address the dire socioeconomic conditions confronting young men of color. A central focus of the initiative is improving college-going rates for African American and Latino young men, who lag behind women of color in college admissions. Another is reducing black and Latino mass incarceration. In launching a White House initiative, some liberal-progressive pundits were ecstatic that Obama deigned to depart from his usual bootstraps script on sagging pants and black personal responsibility. Nonetheless, his meager prescriptions rely heavily on privatization and the philanthropy of a few high profile corporations and nonprofit foundations. This thin gruel dovetails with the neoliberal trend of public education, symbolized by the administration’s emphasis on charters and granting teachers merit pay for high test scores.

Obama’s eleventh hour revelation about the ills of prison pipelining versus college pipelining also coincides with shrill national rhetoric about the declining value of a college degree. Naysayers pontificate about the astronomical costs of college tuition versus the shrinking job market and the glut of over-educated, debt-ridden Millennials with “worthless” liberal arts degrees. The problem with these critiques is that most of them come from conservative white pundits who believe universities have devolved into cesspits of liberal “fascism”. These privileged elites care nothing about the challenges faced by college-educated youth of color in a world where white men with criminal records often have a greater shot at a job than black men without them.

During a recent Men of Color College forum at Gardena High School in South Los Angeles, speakers from diverse walks of life spoke about the critical role college played in their personal growth, educational development, and marketability. The forum was part of a Young Male Scholars pilot (sponsored by the L.A. County Human Relations Commission) whose first phase targets African American male 9th and 10th graders for college preparation. At this particular campus, black students, despite being 23% of the school’s overall population, are only 4% of those enrolled in Advanced Placement classes. Black males have the lowest four year college-going rates at the school yet pack its probation population. Most of these youth will be first generation college students. While the forum panelists acknowledged that college was no magic bullet for getting a job, all stressed that it provided a valuable foundation for habits of mind, study skills, and networking. They also emphasized that mentors were crucial to their success. USC graduate, community organizer and senior human relations consultant Fidel Rodriguez discussed his journey from incarceration to activism, identifying the Autobiography of Malcolm X as pivotal to shaping his political consciousness. Verdel, a Crenshaw High graduate who was offered a football scholarship to USC in his senior year, expressed regret about squandering the opportunity due to of his gangbanging. He advised the youth in the audience not to be deterred by low expectations. Morehouse College graduate Corey Nash, a former foster care youth, credited the encouragement he received at King-Drew Medical Magnet to pursue prestigious scholarships and opportunities that he otherwise wouldn’t have had access to. The nurturing care and culturally responsive reinforcement provided by the staff and faculty of the predominantly African American King-Drew has made it a model for achievement. Activist and microbiology researcher Brandon Bell talked about his mother’s guidance and being pushed to apply to Princeton by persistent mentors at King-Drew. Bell and panelist Theo Rogers do coordinated outreach for young parents in the Crenshaw District of South L.A. through Bell's organization Wisdom From the Field.

The forum comes on the heels of stringent new Los Angeles Unified School District graduation requirements that take effect with the class of 2017. In order to graduate, the current ninth grade class will have to take A-G (i.e., college prep) classes and earn a C or better. However, African American and Latino students have traditionally had less access to A-G courses as well as the highly qualified teachers capable of providing students with rigorous culturally responsive instruction. Without sweeping changes within the District, many students of color will struggle to meet these new requirements and wind up being pushed out. According to UCLA’s Institute for Democracy, only 14% of Latino students and 17% of African American students completed the A-G course sequence in 2011. A-G completion rates for English Language Learners were also abysmally low at 7%. Unless the District makes a concerted effort to train and staff highly qualified teachers at high-need schools, implement K-8 interventions, confront racist adult perceptions about the potential of black students, and promote a culture of high expectations for African American and Latino students the roll-out will only deepen the race/class disparities in Los Angeles. And in a climate where the rhetoric of the GOP and corporate Democrats echo each other no amount of “brother’s keeping” will redress that. 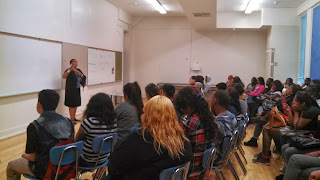 From The Feminist Wire

On Friday, March 7, 2014, TFW Associate Editor Aishah Shahidah Simmons gave a presentation on the importance of naming and ending sexual violence with approximately 50 African-American and Latino students from Washington Prep High School and Duke Ellington Continuation School’s Women of Color in the U.S. class in South Los Angeles. This International Women’s Day (IWD) presentation was conceived and organized by TFW’s Contributing Editor Sikivu Hutchinson who is an award-winning author, senior intergroup specialist for the Los Angeles County Human Relations Commission, and founder of the Women’s Leadership Project (WLP), a high school feminist mentoring program. While WLP’s focus is on girls, this IWD presentation was mixed gender because sexual violence impacts everyone directly and/or indirectly. 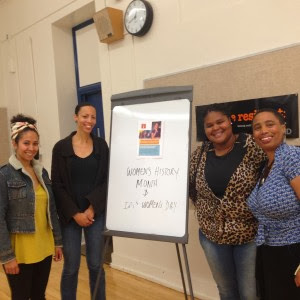 During her presentation, Simmons screened an excerpt of her internationally acclaimed, award-winning film NO! The RapeDocumentary, shared parts of her own incest and rape survivor herstory, and talked about some of the issues covered in the film. They included: rape as a community issue that reinforces interlocking systems of oppression; the role of religion in violence against women; media stereotypes about Black women; and Black men as pro-feminist allies in the anti-sexual violence movement...

http://thefeministwire.com/2014/03/tfws-sikivu-hutchinson-aishah-shahidah-simmons-partner-address-sexual-violence/
Posted by Sikivu at 8:52 AM