How the Sexual Abuse to Prison Pipeline Criminalizes Black Girls

Over the past several years, the movement to end sexual violence has been mainstreamed through social media, K-12 prevention programming and awareness campaigns. Terms like “victim-blaming” and “slut-shaming” have entered the public lexicon, and the prosecution of accused sexual predators such as Brock Turner and Bill Cosby have become cause celébrès. Yet, when the media puts a spotlight on sexual violence victims they are often young, white and middle class. And while it is estimated that one in five women will experience sexual assault or rape, young black women face a different kind of risk, informed by histories of institutional racism, violence and economic inequality. According to a survey conducted by the Black Women’s Blueprint, nearly 60% of young black women have experienced sexual assault by the age of 18. In Los Angeles County, black girls also have the highest rates of domestic sex trafficking victimization and are more likely to be arrested and jailed for prostitution than non-black women and girls. In 2010, African American girls accounted for 92% of youth arrested for prostitution in L.A. County.

These statistics reflect a long history in which African American youth are disproportionately criminalized for sex trafficking. Unlike their white counterparts, they are not viewed as innocent child victims of sexual violence. This perception extends as far back as the 1910 Mann Act, which identified sex trafficking as a form of “white slavery”, and emphasized protecting the morality of white women and white families. As legal scholar Cheryl Butler notes, “Policymakers have ignored the connection between race and other root factors that push minority and poor youth into America’s commercial sex trade.”

Senate Bill 1322, which decriminalizes child prostitution, is partly designed to address this disparity. Authored by State Senator Holly Mitchell, the bill takes effect this month (coinciding with Human Trafficking Awareness month) and prohibits the prosecution of minors for prostitution. The new policy is part of a larger nationwide push to reduce juvenile incarceration for prostitution by properly identifying trafficking survivors as victims of rape and sexual assault. Last year, L.A. County joined the victim advocacy organization Human Rights for Girls in its “No Such Thing as a Child Prostitute” campaign. The initiative was designed to decriminalize and de-stigmatize child sex trafficking victims by providing them with legal, educational and social welfare services. While these efforts are an important start, more work is needed to address the underlying cultural, racial and socioeconomic factors that lead to the disproportionate victimization of black girls.

It is estimated that the majority of child sex trafficking victims in L.A. County come from foster care. At approximately 9% of the County’s population, African American children represent a staggering 29% of foster care youth.

The nexus of sexual abuse and incarceration that ensnares child sex trafficking survivors has been characterized by Human Rights for Girls as the “sexual abuse to prison pipeline”. Here, exposure to “sexual abuse is one of the primary predictors of girls’ entry into the juvenile justice system.” African American girls in particular are more likely than their non-black peers to be re-victimized by sexual abuse in and trafficking through the foster care system.

In addition to having high rates of foster care placement, black girls are especially vulnerable to this form of pipelining because they have high rates of K-12 suspension, expulsion and incarceration. Although they are only 14% of the U.S. population, African American girls comprise 33% of the female juvenile population. At the K-12 level, racial disparities in discipline—rather than higher offense rates—make black girls more likely to be suspended and expelled than non-black girls. According to Monique Morris, president of the National Black Women’s Justice Institute, “the behaviors for which black females routinely experience disciplinary response are [often] related to their nonconformity with notions of white middle class femininity.”

The failure to identify and tailor strategies that are culturally specific to black girls has exacerbated the problem. For example, in February 2016, the Los Angeles Unified School Board passed a resolution directing the LAUSD to create a district-wide pilot program to address the commercial sexual exploitation of children (CSEC) in its school-communities.Although well-intentioned, the resolution did not identify culturally responsive prevention initiatives that specifically addressed disproportionate rates of victimization of black girls or LGBTQ youth of color, who represent a growing, yet “invisible” segment of CSEC victims. Nor did it mandate funding for the proposed pilots. As a South Los Angeles educator, I work daily with young black girls who silently cope with the trauma of sexual and physical violence in their school communities. Inundated with cultural messages that demean and marginalize them, many of my students have grown up with the idea that violence against black women and girls is normal and justifiable.

Targeted culturally responsive training, outreach and youth leadership development that addresses not just the victims and survivors of CSEC—but the educational, health and socioeconomic factors that allow sex trafficking to thrive—are essential. School-communities must make a long term investment in mentoring programs, health education and restorative and social justice leadership initiatives that provide real alternatives for foster care, homeless and LGBTQ youth in heavily impacted communities such as South Los Angeles. It is only when we build a society that values and invests in the social capital of youth of color, rather than more incarceration, jails and policing, that the sexual abuse to prison pipeline can be dismantled.

Future of Feminism in Apartheid L.A. 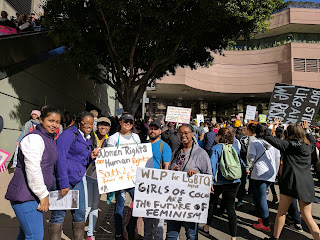 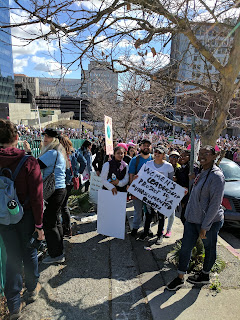 Bursting at the seams metro trains were the first sign my students and I had that the optics of public space in L.A. had shifted for a few rarefied hours. As we navigated South Central to the Women’s march downtown, masses of white women on the Blue, Red and Purple lines jammed in with folk of color who typically pack L.A.’s stratified public transportation system.

After all the controversy surrounding the white origins of the Women’s March, L.A.’s event was a snapshot of the deep segregation and Euro privilege that shapes the city’s cultural geography.  Women of color demonstrators and a predominantly white female crowd of all generations and political backgrounds descended upon downtown in righteous fury against Trumpism. Home to the largest homeless population in the country, downtown L.A. is heavily contested space, having undergone a massive gentrification wave that has displaced and further ghettoized working class people of color. The well-heeled middle to upper middle class white demonstrators reflected this incursion. Thirty years ago, a predominantly white female crowd of this magnitude would have been inconceivable.  Back then, downtown east of Grand Avenue was considered an uninhabitable “wasteland” where white yuppies feared to tread.  Now, it’s a developer’s playground of multi-million dollar lofts replete with ground floor restaurants and hipster bars.

Unlike other protests and demonstrations I’ve participated in, the police presence at the downtown march was vaporous.  With so much of white L.A. “in the house” it was a given that the LAPD would keep making white lives matter by maintaining a respectful distance in the background.

So, in many regards, Saturday’s massive white presence in the “rebranded” downtown business district was a perfect metaphor for the historic fissures of the white-dominated women’s movement.  The white nationalist rebuke of Hillary Clinton and Donald Trump’s sexist/misogynist vitriol have galvanized millions of white women but black women activists have consistently questioned where these women were on issues of state violence, mass incarceration, economic justice, employment discrimination, undocumented immigrant rights and the apartheid education structure that undermines communities of color.  Some have pushed back against white feminists’ reductive focus on fighting the GOP and Religious Right’s assault on birth control and abortion as though they were unconnected to economic justice, anti-racism and critiques of capitalism.  The majority of white women who participated in the L.A. march benefit from the city’s historically rigid lines of de facto segregation, living in neighborhoods that are protected by access to high performing schools, park spaces, quality health care facilities and high wage job industries.

Yet, the students who attended the march with me from South L.A.’s Women’s Leadership Project(WLP) felt uplifted by the weekend display of solidarity and anti-Trump resistance.  It was the first public protest march for most of them, and, while they were turned off by its whiteness, they were also hopeful about possibilities for intersectional feminism.  Dreamer activist and Gardena High School alum Lizeth Soria has worked to provide educational resources and college access for AB540 undocumented students. WLP alum and first generation college student Imani Moses has been an outspoken voice for reproductive justice, abortion rights and sexual violence prevention for high school girls of color.  King-Drew Magnet High School tenth grader Cheyenne McClaren has challenged misogynoir and sexist violence against black women in the media as a peer facilitator for WLP’s youth forums.  All three young women expressed a desire to see Saturday’s energy develop into meaningful coalition building (the D.C. March organizers quickly posted a series of next steps online called the “next 100 days”) and policy change, especially when it comes to the systemic disenfranchisement of black girls and girls of color.

Indeed, a stone’s throw from downtown’s march, the predominantly black homeless youth population—which includes large numbers of queer, trans, cis female and foster youth who are sexual assault and sex trafficking survivors—continues to struggle for visibility and services in a political landscape that marginalizes the needs of black sexual assault survivors.  Redressing this gap is part of the students’ long term agenda building, and a focus of their upcoming youth facilitated “Future of Feminism” conference in May.  These intersectional issues remain MIA in the mainstream women’s and civil rights movements, particularly in a city with some of the greatest extremes of wealth, income and residential mobility. While acknowledging racism and white supremacy within mainstream white feminism, Imani, Cheyenne and Liz are not waiting for white women to magically stop being racist to reclaim feminism, womanism and the legacy of revolutionary struggle indigenous women and black women forged long before nineteenth century first wave feminism.