White Out: Racial Politics and the Black Image in Hollywood 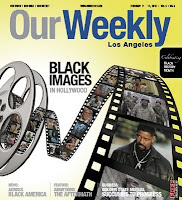 By Sikivu Hutchinson, from Our Weekly

Nine white actresses grace the cover of the March 2010 “New Hollywood” issue of the magazine Vanity Fair, sprawled like anorexic lilies against a spring green field. In a film season where the most talked about performance by a young actress was that of an African American woman—best actress Oscar nominee Gabourey Sidibe of the film Precious—New Hollywood looks suspiciously like the Old. Although the nation has elected its first African American president and ushered its first African American family into the White House, the American film industry remains among the most segregated in the country. As one of the most powerful mediums of cultural propaganda on the planet, the film industry is still an empire of white corporate control. A 2002 study published by UC Santa Barbara professors Denise and Bill Bielby concluded that rampant cronyism, arbitrary hiring practices and the racial biases of bottom-line oriented foreign investors have kept both the film and TV industries bastions of whiteness. Further, the absence of studio heads of color exacerbates the exclusion of people of color from the old boy networks that often dictate hiring, promotion and the green lighting of films in the industry.

It is because of these exclusionary practices that the self-image of African Americans in 21st century film remains a political minefield. For example, the colossal mainstream success of the Tyler Perry...www.ourweekly.com
Posted by Sikivu at 7:39 AM 1 comment: 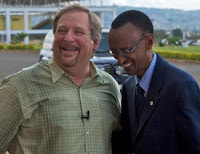 White evangelicals have taken their corrupt “traditional family values” racket to Africa and hit paydirt. Over the past several months, Uganda’s terrorist anti-Homosexual Bill has been exposed as not just a symbol of African homophobia but a symptom of American evangelical empire building. While the legal battle over same sex marriage has reached epic proportions in the United States, American evangelicals have been quietly wielding “moral” influence over African public policy, spearheading a rabid call for retribution against gays and lesbians in their missionary pilgrimages. During a March 2009 trip to Uganda, evangelical activists Scott Lively and Don Schmierer warned Ugandan leaders of a gay agenda to “take over the world.” Lively and Schmierer have been roundly condemned by human rights and social justice organizations for galvanizing Ugandan politicians to develop the legislation.

As has been well-documented, the Ugandan legislation would “seek to protect the traditional family by prohibiting any form of sexual relations between persons of the same sex.” It would also bar “the promotion or recognition of such sexual relations in public institutions and other places through or with the support of any Government entity in Uganda or any non-governmental organization inside or outside the country.” The Bill envisions a vast homosexual conspiracy of “sexual activists” seeking to convert youth and adopt children. It would require those knowing of homosexual acts to report them or risk prosecution, and, as a result, seriously jeopardize the country's inroads into HIV/AIDS prevention and treatment.

The United States and other donor countries have denounced the Bill. Facing the possible loss of international aid, the Ugandan government is considering revising an earlier provision which would have required the execution of known homosexuals.

After a firestorm of criticism, the evangelicals have also tried to distance themselves from the flap. However, the Ugandan Bill is part of a larger movement of evangelical puppeteering. The Bill exploits deep anti-gay sentiment and anxieties within African culture about a family structure under siege by “outside” forces, evoking some of the same tensions that African American communities experienced around California's Proposition 8. Fittingly, the Bill has been bankrolled by conservative foundations and promoted by the far right Christian activist group the Family. Stoking anti-gay sentiment through biblical edict and propaganda about potential homosexual corruption of the African family, evangelicals have used Africa as a springboard for a virulently homophobic agenda that has been intensified by the struggle over gay equal rights in the United States. At the forefront of this movement is President Obama's buddy Rick Warren. Warren's purpose-driven crew is hugely influential in Africa, funding schools, missions and HIV/AIDS treatment while brokering homophobia.

Warren and his American counterparts have identified Africa as the new frontier and future of evangelicalism. And as such, Africa is fertile ground for the export of hate and right wing evangelical terrorism. Indeed, evangelicals’ hold on Africa is merely an extension of white supremacist control over African self-determination. The colonial legacy of African exploitation by the West, exemplified by the undue cultural and economic influence of Western missionaries, has played a pernicious role in the African psyche. To the extent that African nations have been so besieged by Western influence, their embrace of American-bred homophobia, in exchange for American largesse, is simply part of the package of white capitalist patronage.

For this reason, it is inconceivable that African evangelicals would have the same impact on public policy in the West. In a sweeping expose, the progressive think tank Political Research Associates reports that American evangelicals have long been active in promoting anti-gay public policy through their missionary work in Africa. Because “the demographic center of Christianity is shifting from the global North to the global South,” Africa’s influence on the global direction of Christianity has increased. According to the report, one of the architects of this movement is the Institute for Religion and Democracy (IRD). IRD is a neo-conservative think tank which has exploited the widespread belief that homosexuality is a western phenomenon that undermines essential African culture values. Scratch the surface and IRD is a radical political organization that has actively opposed the social justice campaigns of mainline Protestant churches and pro-democracy movements in Central America and Africa.

Supported by ultraconservative foundations such as the Scaife and Bradley Foundations, the organization is part of a well-financed network of think tanks and nonprofits, many with tax exempt status granted to religious entities. The staggering amounts funneled into these organizations dwarfs foundation grants and funding to progressive advocacy organizations. As a result, conservative organizations are better equipped to position themselves as lobbyists and power brokers in both the global and domestic legislative arena.

The intersection of dire poverty, underdevelopment and social desperation has historically made African countries vulnerable to the moral profiteering of a bankrupt evangelical movement. Make no mistake, American evangelicals, in their advancement of a terrorist agenda that ultimately seeks extermination based on sexuality, will most certainly have blood on their hands. Far from being an isolated act of extremism, Uganda's shadow evangelical legislature is yet another potent reminder of the global destruction that the Christian right wreaks in the name of Western enlightenment. As the anonymous author of the blog Gay Uganda says, “I am immersed in the middle of a battle for my life. My very life, me and my partner’s. And of all Ugandans that are like me.”


Sikivu Hutchinson is the editor of blackfemlens.org and the author of the forthcoming book Moral Combat: Black Atheists, Gender Politics and Secular America.
Posted by Sikivu at 9:51 AM No comments: