College for the One Percent

Recently former GOP presidential candidate Rick Santorum called President Obama a snob for having the audacity to suggest that going to college should be a priority. As a privileged white male college graduate on big government’s payroll Santorum’s message to youth of color is: why go to college when there are unskilled sub living wage jobs selling oranges, cleaning houses, washing cars and shoveling French fry grease awaiting you in the ghetto? Santorum’s anti-college diatribe comes in an era when the need for a college degree has increasingly been questioned by both right wing policy makers and mainstream media. Yet, college-going continues to be one of the bedrock civil rights issues for youth of color in the U.S. Over the past several years the wealth gap between black and Latino households and white households has widened. Over the course of their lifetimes college graduates earn nearly one to several million more than do high school graduates. However, in California, Latino youth have the lowest college going rates among youth of all ethnicities despite the fact that they comprise over 50% of students in California schools. While college-going for African American students has increased college completion for youth of color overall remains abysmally low at major colleges and universities. Historically, colleges and universities that have few African American students and few culturally responsive on-campus resources have lower black graduation rates. According to the Journal of Blacks in Higher Education, “Curriculum differences also play an important role in graduation rates. Carnegie Mellon University and Cal Tech are heavily oriented toward the sciences, fields in which blacks have always had a small presence. It continues to be true that at many high-powered schools black students in the sciences often have been made to feel uncomfortable by white faculty and administrators who persist in beliefs that blacks do not have the intellectual capacity to succeed in these disciplines.”


For youth of color who are the first in their families to go to college these challenges are compounded by the disproportionate number of black and Latino students who are in foster care, undocumented, homeless, and/or formerly incarcerated. Only 44% of LAUSD graduates go on to four year colleges. And the percentage of South Los Angeles high school graduates who do so is significantly lower. Due to budget cuts, inept professional development and institutional racism, culturally responsive college counselors, A-G college preparation courses, and highly qualified teachers are in short supply in high poverty schools. During a recent college forum at Gardena High School four activists from the Women’s Leadership Project and FUEL, CSU Long Beach’s undocumented youth advocacy group, discussed the importance of knowing how to prepare for and navigate college. All of the young women on the panel were the first in their families to go to college. The panelists discussed study groups, mentors, taking the time to meet with professors during office hours and tuning out the distraction of social media and peer pressure. Although the college-going rates of women of color outpace their male counterparts, college-educated black and Latina women continue to face steep obstacles in the job market vis-à-vis sexual harassment, employment discrimination (particularly within the private sphere), and pernicious wage gaps. Indeed, although black men have higher overall unemployment rates than black women, rates for black men improved at the end of 2011 and worsened for black women due to deep cuts in public sector jobs. The panelists addressed confronting sexist low expectations in school-community climates that normalize misogyny, teen pregnancy, and the model of black and Latina women as self-sacrificing caregivers.
http://www.womenleadershipproject.blogspot.com/2012/04/wlp-presents-women-of-color-college.html
Posted by Sikivu at 3:15 PM 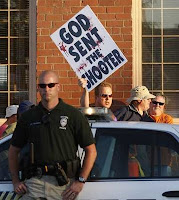 In yet another act of domestic terror against a family planning facility, a Planned Parenthood clinic in Wisconsin was fire-bombed recently.  The attack comes on the heels of the bombing of a Pensacola, Florida clinic in January.  Although no one was injured in the attack, the fascist demonization of Planned Parenthood by inciters like Rick Santorum and Mitt Romney continues to put women’s lives in the line of fire; in an era of vanishing clinics and mounting violence.


In honor of Abortion Providers’ Day last month I visited a family planning clinic after participating in an abortion rights protest.  The head doctor on staff lamented how few of his colleagues had been trained to perform abortions. Volunteer patient escorts helped protect the tucked away strip mall facility from violent interlopers.  The scene was a vivid reminder of the atrocity of the assassination of Kansas abortion provider Dr. George Tiller in 2009.


Tiller was murdered in cold blood in his church by former Montana freemen and Army of God member Scott Roeder, who said he was just following God’s law. At Tiller’s funeral anti-abortion protesters wielded signs proclaiming “God sent the shooter.” His murder was the culmination of years of attempted murders, death threats, bombings and arson attacks waged against abortion providers by white Christian terrorists. While law-abiding Muslim Americans continue to be profiled and surveilled, white Christian terrorists are handled cautiously.  Historically the feds have always reserved their most savage, concerted “counter-terrorist” campaigns for radical activists of color.  From 1956 to 1971 J. Edgar Hoover’s FBI launched its notorious Cointelpro “counter-intelligence” operation targeting radical groups in the U.S.  The operation systematically co-opted, jailed, and murdered activists of color in organizations like the Black Panther Party, the US Organization, the American Indian Movement, and the liberal Southern Christian Leadership Conference.  Hoover relentlessly smeared these groups as domestic terrorists. The fire-bombing of a Wisconsin Planned Parenthood clinic is a potent reminder of how white Christian terrorism gets a pass in the mainstream media.


Yet white militants who invoke Christian fundamentalism to justify their barbaric acts against women and their allies are still dismissed in the mainstream as aberrations.  These spasms of Christian fundamentalist violence are largely peculiar to the . Anti-abortion activism in Western European countries such as Britian, and doesn’t inspire anywhere near the level of militant resistance seen here. This virulent strain of fundamentalism was nourished by three theocratic Republican administrations that dismembered the Constitution and effectively sanctioned criminal campaigns against abortion providers. So while the condemns Muslim religious fundamentalism and trumpets itself as a beacon for individual and civil liberties unbridled by theocratic intolerance it has become a breeding ground for the most dangerous Christian fundamentalist terrorist movement in the world.

Writing for the Southern Poverty Law Center back in 1998, Frederick Clarkson pinpointed the alignment of anti-abortion terrorism, white supremacist activism, and the far right militia movement.  Like the perennial black male inner city perp, the profiles of anti-abortion terrorists are always the same—“disaffected” white middle aged males, drunk with anti-government militia and/or a fundamentalist ethos steeped in the bloody retribution of the Old Testament. Clearly black men running around bombing abortion clinics or plotting to kill abortion doctors would get no farther than the nearest county jail cell.  And as the lynch mob justice meted out to Trayvon Martin, Kendrick McDade, and scores of other people of color demonstrates the threat of “savage” black criminality—particularly vis-à-vis white lives in the heartland or in gated communities—is the only national scourge that must be contained by any means necessary.