Which Working Women? From Plantation to Public Sector 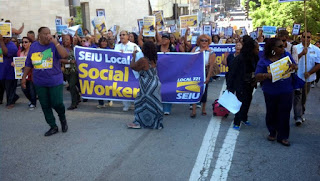 In the 1705 pro-slavery tract History and Present State of Virginia, planter Robert Beverley wrote that “Sufficient distinction is also made between servants and slaves: for a white woman is rarely put in the ground…and to discourage all planters from using women so.  Their law imposes the heaviest taxes upon female-servants working in the ground…whereas it is a common thing to work a woman slave out of doors; nor does the law make any distinction in her taxes whether her work be abroad or at home.” Beverley argued that the basic condition of black women was one of enslavement.  White women indentured servants had temporary servant status (and never slave status) while black women’s bodies produced new slaves, provided the lifeblood for the capitalist plantation economy, and the moral justification for white supremacist sexual exploitation.  As Beverley so brutally and vividly framed it, “Slaves are the Negroes and their posterity, following the condition of the Mother, according to the maxim, partus sequitur ventrem [status follows the womb]. They are call’d slaves, in respect of the time of their servitude, because it is for life.

Centuries later, the insidious shadow of white supremacy’s slave breeder/Mammy/ Jezebel trifecta continues to inform representations of black women’s work.  From the shiftless lazy welfare queen to the amoral prostitute and the faceless caregiver who cleans up after hapless white folk, caricatures of black women’s work play a key role in propping up income and wealth inequality while reinforcing the myth of American free enterprise. As workers mobilize for May Day and beyond, Trumpist assaults on health care, reproductive justice, environmental protections, voting rights, public education, living wage jobs, unionization and collective bargaining have made the stakes for black women workers even higher.

Contrary to popular stereotypes, black women have the highest workforce participation among all women in the U.S.; at 59.2%, compared to 57% of women overall.  Despite this reality, black women have the least wealth of any group in the nation. Fulltime black female wage earners make only 60 cents to the dollar of white men and “80% of white women’s weekly earnings”.  Wealth—which represents total assets, such as savings, property and investments—is ultimately a far more important measure of economic wellness than income.  And the persistent wealth gap between white and black women remains despite the fact that black women have the “highest growth rate of college enrollment” in the nation.

The intersection of racism, sexism, heterosexism and global capitalism drives black women’s “overrepresentation” in the workforce.  Post-emancipation, Jim Crow and de facto segregationist suppression of black wages and institutionalized discrimination in employment, housing and education meant that the majority of black women could never stay home out of the paid workforce like many white women.  Indeed, the epic resistance of black women civil rights freedom fighters was always connected to achieving self-determination and human rights in the very homes, buses, factories, train stations, schools, churches and plants where black women endured wage and sexual exploitation.  Under these conditions, black households depended on two, three and sometimes four or more incomes to stay afloat.  With the post Cold War decline of unionized manufacturing jobs, black women’s wages plummeted even further.  In the post-industrial age, disappearing public sector jobs with union protection have undermined black economic mobility as black women are more likely to be employed in the public sector than white women. (African American women have greater representation in public sector employment than both African American men and white women.)  As the New York Times noted, “a combination of strong anti-government and anti-tax sentiment in some places has kept down public payrolls.” These factors, coupled with “attempts to curb collective bargaining”, have kneecapped unions.

The Institute for Women’s Policy and Research (IWPR) estimates that the gender wage gap for black women widened from 2004 to 2014: ‘Black women’s real median annual earnings for full-time, year-round work declined by 5.0 percent—more than three times as much as women’s earnings overall.’”

The through line between eighteenth century injunctions against “putting white women in the ground” and contemporary race/gender schisms in wealth and wages could not be clearer.  As black communities and black women workers hang in the balance, a socialist redistribution of wealth should be at the center of anti-Trumpist racial and gender justice agendas.