From BOYZ to Gentleman Scholars: Literature as Life (Excerpt) 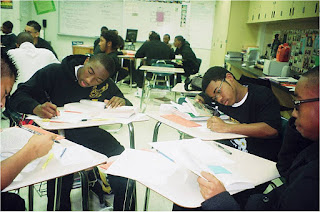 By Yvonne Divans-Hutchinson
I am a nationally board certified teacher and a veteran of forty three years as an English teacher in middle and high school in South Los Angeles. A product of South L.A. myself, I have always been concerned about the so-called achievement gap of African Americans, especially African American males. Despite the dismal statistics regularly trumpeted by the media—lowest academic achievement, highest in unemployment, lowest in college degrees earned, highest number incarcerated—I know that, with effective, culturally sensitive instruction, our young men can—and will—achieve. In fact, my greatest joy in the last two years of teaching came from my participation in the All-male Academy (AMA) at one of my former schools, an urban magnet high school.  The AMA was established in 2004 to address the absence of African American males in Advanced Placement classes, the discrepancy between one young man’s  score of advanced on the CST and his academic achievement—he received an F in English—and the disproportionate number of referrals and suspensions (51%) among male students, who were only 30% of the student population.
Due to competition from other medical magnet schools, on the eastside and in the valley, our once widely diverse population has diminished since its creation twenty-nine years ago as the first medical magnet high school in the Los Angeles Unified School District. Conceived by a group of African American community activists and parents, it has long been a haven for high achieving students of color and those who want to pursue careers in medicine and science. The student body is mostly African American (58%) and Latino (40%) with a small percentage of Asian, African, and Middle Eastern students. Only one-third of the population of 1500 students is male.


Reuniting with the Gentlemen Scholars
When I was invited to become a member of the English Language Learner Inquiry Leadership Team under the aegis of the UCLA Writing Project, I decided to focus on speakers of Black English, the African American Vernacular (AAV). My Gentlemen Scholars, the young men I had taught the last year before I retired in 2009, immediately came to mind. From the first day that they entered my class as ninth graders, I addressed them as “Gentlemen Scholars.” In his book Teaching Reading to Black Adolescent Males, educator Alfred Tatum discusses Black male literacy development in the context of “the turmoil milieu.” He underscores the importance of considering the environment of poverty, family problems, crime, gangbanging, police brutality, and racism, and “its implications for literacy among black males who attend school in America’s economically starved urban centers.” Vershawn Ashanti Young,  an African American assistant professor at the University of Iowa, emphasizes that being scholarly or acting like a “nerd” is viewed in “the hood” as unmanly or “acting white.”

I set out to counteract these negative perceptions and encouraged my freshmen to act like “schoolboys” instead of “homeboys.  “Homeboys,” I had been informed by one of my male students long ago, “did not carry books; that’s for schoolboys.” Because I had continued to visit my school since retirement, I knew that my former “schoolboys” were now seniors and that about half of them had remained in the All-male Academy for the entire four years.

As a past department chair and mentor to a few of the younger teachers at King/Drew, I had maintained my relationship with my ex colleagues. Consequently, I had no qualms about approaching  Ms. Code,*  the current teacher of my former all male class with a proposal to “borrow” the gentlemen back for a short time to do my study. She had guided the young men through the eleventh grade  American Literature/Contemporary Composition class. She was in  the midst of  teaching the first semester of  their senior World Literature/Expository Composition class.  When I asked to take over the class second semester, she graciously assented.


That Is the Question
Both Ms. Code and I recognized that the chief characteristic of the class as a whole was their garrulousness. They reveled in talk. Their conversations were rousing (and sometimes rowdy) and usually dominated by a few, highly articulate members of the class, mostly Black students. Geneva Smitherman refers to “the natural talent for oratory prevalent among African Americans.  The man of words—be he preacher, poet, philosopher, huckster or rap song creator—receives the highest form of respect in the black community.  The verbal adroitness, the cogent and quick wit, the brilliant use of metaphorical language, the facility in rhythm and rhyme evident in the language of . . . many black students, may all be drawn upon to facilitate learning.”  As I reflected on my interactions with my former Gentlemen Scholars, Smitherman’s words resonated loudly.  I wanted to maintain that level of involvement and encourage all students toward oratory, or in our case, academic discourse. While I am aware of the educational trend toward focusing on black students who speak the so-called African American Vernacular(AAV), or Black English (Ebonics), and encouraging  “code switching,” in their written and spoken discourse, I did not choose to employ this approach. Code switching involves teaching speakers of AAV to learn and use so-called standard English** in formal and academic settings. They then “switch back” to Black English during informal or personal encounters with other African Americans. During my observations, modifying the students’ use of language did not strike me as imperative.  I have noted that the more well-read students are, the more conversant they are with “standard English.” Avid readers become steeped in language, unconsciously absorbing vocabulary and syntax.


Hence, I decided to explore the question: Which research-based strategies will prove most effective in enhancing the reading, writing, and thinking skills of the African Americans in my all male Senior World Literature/Expository Composition class?
Since the course was devoted to World Literature and expository composition, the class had already read widely in the literary canon: Oedipus, Hamlet, Beowulf, Things Fall Apart. Their activities included Socratic Seminars, small group and whole class discussions, graphic representations, written responses to open-ended questions about the literature, the production of individual and group performances enhanced by media and technology, and composing essays. They had reflected on many ideas, values, and issues of universal concern, especially those of relevance to them. One of their favorite topics was the nature of manhood. They pondered such questions as What makes a man a man? What is a real man? What does it take to become a man?


Tatum emphasizes, “Texts connected to larger academic, cultural, economic, political, social, and personal aims help …young [African American] males define who they are and what they can become; help them become resilient and move them to engage positively with others for their own benefit and that of the larger society.” With his admonition in mind, I set out to explore their notions of manhood more deeply. I had chosen two novels that met Tatum’s criteria, Always Outnumbered Always Outgunned by Walter Mosley, an African American author and gods go begging by Alfredo Vea, a Mexican American author. However, I could only teach one novel during the ten to twelve weeks of my guest teaching. Admittedly, my focus was on African American students, but my class also included young men of Latino descent. I needed to choose a text that would resonate with them as well. Meanwhile, I was very much interested in how the young men responded to the “Big Idea”—the nature of manhood—that had occupied them the first semester. 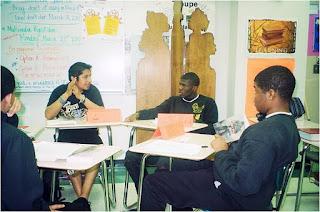 Yvonne Divans-Hutchinson is a veteran English teacher of forty-three years in LAUSD.  She has taught at Markham Junior High/Middle School and King/Drew Magnet High School of Medicine and Science. She is a National Board Certified teacher, a member of the UCLA California Writing Project, and an instructor in Teach LA/Teach Compton Teacher Intern Program for UCLA Extension
Posted by Sikivu at 11:15 AM

Sikivu: I grew up in a secular household, so I had a leg up on skepticism, freethought and intellectual curiosity. Both my parents were what I would call “activist scholars.” Some of my earliest memories coming of age in South L.A. in the 70s and 80s were of going to demonstrations, public forums and meetings on social justice issues relevant to the black community, particularly around the pervasiveness of police terrorism and police misconduct during that era. I was also exposed to authors, intellectuals and historical figures of African descent (many of whom embraced freethought) very early on, so this became my moral foundation. My parents ensured that I had literature from black women thinkers and writers. My father gave me my first anthology (by Mari Evans) on black women writers in high school and my mother was a nationally esteemed English teacher heavily into forerunning womanist/feminist writers like Toni Cade Bambara, Alice Walker and Toni Morrison. These were my values. Consequently, Christianity, supernaturalism and belief in God really had no bearing on my sense of ethics, justice, fairness and identity.

MSS: Outing yourself as an atheist in this society could be painful and scary. Why is it important to you to share your views on spirituality or the lack thereof?

Sikivu: My world view as a non-believer and a humanist goes beyond the question of spirituality. There have always been black free thinkers and secular humanists who have challenged the ways in which Western notions of personhood, public morality and Manifest Destiny-style justice pivot on racial/sexual otherness and the imperialist dehumanization of people of color. The dominant culture simply doesn’t acknowledge these traditions as being a legitimate and culturally relevant part of black intellectual history and social thought. For example, mainstream discourse fetishizes black religiosity and deifies MLK as a strictly religious figure and thinker without reference to the humanist underpinnings of black liberation struggle. So my charge is to bring secular humanist traditions to the fore and contextualize them in terms of the human rights struggles that people of African descent are still waging in this so-called era of American exceptionalism, post-racialism and post-feminism.

MSS: Is Feminism an anti-man movement? In your eyes, what is it?

Sikivu: The idea that feminism is “anti-man” is an absurd caricature. In its most radical humanistic form, feminism is a movement for the recognition of the absolute human rights of women, their families and communities. It seeks to break down heterosexist and patriarchal models of masculine and feminine that straightjacket all genders into binary oppositional roles. Patriarchy and sexism...More @http://www.mysavvysisters.com/2011/11/my-savvy-sister-of-week-sikivu.html
Posted by Sikivu at 2:53 PM