"When they begin the grind of identifying remains, who will claim us?"

Over the past forty years since the Jonestown Guyana massacre of November 18, 1978, there has been a wealth of information and analysis on the event. Scores of articles, books, documentaries, student research papers, films, and other treatments have been produced with the ostensible aim of explaining the “mystery” of Jonestown.  Though Peoples Temple was a predominantly black church, and the majority of those who died in Jonestown were African American women, the sociopolitical and historical issues that compelled black women to emigrate to Jonestown have not received widespread attention. For example, only two books among the dozens of published book length works devoted to Jonestown on Goodreads were authored by black women. The “Jonestown industrial complex”, has been fashioned through a white, Eurocentric lens, with black folks and black women reduced to gullible spectators and voiceless victims, a colorful backdrop to the antics of evil yet charismatic white saviors. This erasure is reminiscent of the way black women have been written out of the history of the civil rights and Black Power movements, of the Women’s movement and LGBTQI liberation movements, both recast with a white face.  Peoples Temple embodied the vitality and contradictions of all of these movements.  As an outsider looking in, I recognized my grandmothers in Hyacinth and Zipporah Thrash, early Temple members in the 1950s, who were part of the Southern and Midwestern diaspora of the Great Migration. Black women only a few generations removed from slavery, who believed California would be another promised land, a space of deliverance from Jim Crow terrorism and sexual violence.  Women who tithed property, income and benefits to Peoples Temple and had their dream of self-determination shattered in Jonestown.
Dissatisfied by this erasure, Jonestown survivors Leslie Wagner Wilson, Yulanda Williams, and I decided to create the website Blackjonestown.org.  Although by no means exhaustive, the site is designed to examine, reflect on, and memorialize the impact of Jonestown on African American people in general and African American women in particular.  We’d like for it to be a platform for an evolving body of work on the black experience in Jonestown and Peoples Temple, in order to assert black agency within a narrative that has long been framed as deviant and pathological.

In an era in which African Americans continue to struggle with religious idolatry against a backdrop of socioeconomic and political disenfranchisement, Jonestown illustrates the steep price black folks paid to pursue what they believed would be a path to liberation.  As with so many African Americans in the contemporary U.S., black folks in the California communities where Peoples Temple dominated were being massively displaced from their homes due to gentrification and “urban renewal” (once dubbed “Negro removal” by James Baldwin).  The African American community in Fillmore, San Francisco, the church’s base, was at the eye of this storm. During the post-civil rights, post-Black Power era of Jonestown, the so-called “California dream” was revealed to be a nightmare.  Rife with racially restrictive covenants and apartheid-style policing, so-called liberal cities like Los Angeles and San Francisco were just as insidiously segregated as the Jim Crow South. Some church members viewed emigrating to Jonestown as a utopic escape hatch in a climate in which blacks were fighting to keep their homes, communities, and identities.  In the twenty first century San Francisco of Silicon Valley billionaires, skyrocketing rents and unaffordable homes black folks have been pushed out of the city and into the epicenter of the state’s homeless crisis.  It is for this reason that Jonestown remains compelling to a cross-section of African Americans as both a cautionary tale and a troubling symbol of black struggle in a period in which traditional black cultural institutions like the church were perceived as either ineffective or MIA.  Hence, Black Jonestown is an effort to both document and contextualize the contemporary relevance of Peoples Temple and Jonestown for the black diaspora in the twenty first century.

On the anniversary, a “Day of Atonement” commemoration will be held in San Francisco’s Fillmore community in acknowledgment of Jonestown’s lasting impact on African Americans. The event will be the first of its kind to be held in San Francisco, the former headquarters of Peoples Temple.  At the end of November, the stage play adaptation of White Nights, Black Paradise, based on my 2015 historical fiction novel exploring the interlocking relationships, politics, and social histories of black women in Peoples Temple and Jonestown, will debut for a limited run at L.A.’s Hudson Theatre with a predominantly black female cast.

Black lesbian poet and activist Audre Lourde once said, “If I didn’t define myself for myself, I would be crunched into other people’s fantasies for me and eaten alive.” Her words resonate deeply as we confront the living, breathing past of Jonestown. 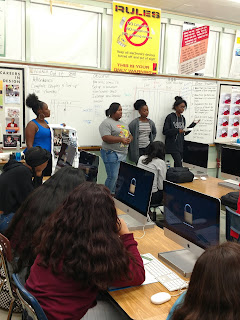 During a recent youth voter education and registration outreach for high school juniors and seniors in South Los Angeles, Women’s Leadership Project program students spoke passionately about how their parents and caregivers were struggling with high rents in the shadow of eviction.  Twelfth grader Nigia Vanetty spoke of the insanity of paying for hundreds of dollars in utilities on top of rent. CSULB graduate and former homeless youth Imani Moses related how it was difficult to find a job that paid enough to do so in overpriced L.A. Even though college degrees have never guaranteed living wage employment for Black folks, joblessness among college-educated Black youth has worsened over the past decade.  For many Black youth, stress and depression, driven by unstable living situations, are a persistent source of trauma.   Doubling and tripling up in the homes of extended family, couch surfing temporarily with friends and relatives, and living in cars have become standard for basic survival.  According to the L.A. Downtown News, the number of children on Skid Row doubled in 2018.  Downtown shelters are at capacity and exposure to street violence, police harassment, sexual abuse, and food instability makes homelessness a mental and emotional health hazard for very young children who then have to cope with trying to stay in school.

During the 2016-2017 school year, there were 17,258 homeless students in the Los Angeles Unified School District.  Nearly 40% of homeless youth identify as queer and LGBTQI and 25% were involved in the juvenile justice system.  According to the L.A. Homeless Services Authority’s 2018 homeless count, there are 2210 homeless youth (sheltered and unsheltered) in the City of Los Angeles, a figure which includes Transitional Age Youth (TAY), unaccompanied minors, and children in young families.

Skyrocketing homelessness has been a major factor in the push for Proposition 10, which would allow local municipalities to determine their own rent control regulations by repealing the 1995 Costa Hawkins law restricting rent control.  The median rent in L.A. County is now $1676 for a one-bedroom apartment and a whopping $2175 for a two-bedroom. Major developers and corporate real estate interests have poured millions into trying to defeat Prop 10. Their efforts underscore the apartheid state of California housing. In a region with the greatest gap between rich and poor, the presence of tents, campers and folks sleeping on the street has become normalized for NIMBYs who decry homelessness but vociferously oppose the most modest efforts to construct supportive housing.  Across California, the fallout from rising rent and home prices has been particularly devastating for African American communities struggling with inveterate unemployment and wealth inequality. Traditional African American communities in South L.A. and Inglewood have become increasingly unaffordable due to rent gouging and the proliferation of developers, flippers, and white homebuyers who’ve been priced out of the Westside and South Bay. Structural racism in the rental market and housing market go hand in hand.  As noted in LAHSA’S October Ad Hoc Committee report on Black People Experiencing Homelessness, “Black folks are too often precluded from housing due to racial discrimination on the part of property owners, leasing agents and property managers.”  These factors have virtually shut out Black Millennials from the wealth generation that comes with homeownership and equity.

Proposition 10 is no magic bullet for California’s housing affordability crisis.  Investment in permanent supportive housing, equitable job development and homebuying opportunities, wraparound services for homeless domestic and sexual violence victims and transformative justice must come from the City and County’s multi-million dollar measure H and HHH funding. But by providing a level playing field for renters Prop 10 would give working families a fighting chance in the battle to ensure that children aren’t thrown onto the street by greedy landlords exploiting the state’s supernova real estate market.