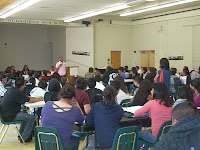 An hour before last Tuesday’s accidental shooting at Gardena High School the campus radiated calm and placidity. I had just finished doing a workshop on homophobia and gender stereotypes with a peer health class headed by the fabulous teacher Debbie Wallace. The campus is a big geographic hybrid. It abuts a train corridor to the west and a phalanx of freeways to the east. The grounds are labyrinthine and rose bushes bloom fiercely in the courtyard. Four parking lots bookend each of the school’s exits. Low slung buildings and a network of open hallways wrap around the grounds, quietly testifying to its all-American journey from plum white campus to “ghetto” school in decline.

Media stereotypes about lawless, criminal urban schools are now a stock part of the American narrative. They add color, spice, and grit to a special genre of American meritocracy; the kind eternally populated by gleaming toothed Great White Hope teachers laboring against the corrupt system to bring Shakespeare, Langston Hughes and Enlightenment to culturally deprived ghetto children. It is axiomatic that these transformational teachers can never be black or Latino and from the ‘hood. It is a certainty that these sages on the stage will turn around the most hardened heretofore unreachable gang-affiliated youth with a steady diet of literary pixie dust and tough love.

After the Gardena shooting local and national news expertly trotted out these themes, minus the missionary teacher. My students complained about sensationalist portrayals. Some were outraged by a local TV news station’s dismissal of the gains the school had made in reducing suspensions. Others noticed the unfavorable comparison between Gardena and the more affluent El Camino Real High School in Woodland Hills, where a school police officer had been shot near the campus the day after the Gardena incident. El Camino Real is an academic decathlon winner located in a suburban area with "winding residential streets." So quite naturally one would never expect such a heinous act to occur there.

And yet, it did. In its rush to milk the narrative of urban youth criminality, the media conveniently omitted that the most heinous and prolific acts of violence resulting in mass student casualties have been in suburban white America. The shooters in the infamous school massacres at Littleton Colorado (Columbine High), Jonesboro, Arkansas and Santee, California were young disaffected white males with similar backgrounds to Tucson shooter Jared Loughner. Like the young man at Gardena, they were steeped in a gun culture that valorized violent masculinity. However, the Columbine, Jonesboro and Santee students were instantly transformed into symbols of troubled youth. These tragic figures were our boys; our problem, our wasted youth. As media critics Sut Jhally and Jackson Katz wrote in response to Columbine, “when the perpetrators are boys, we talk in a gender-neutral way about kids or children, and few (with the exception of some feminist scholars) delve into the forces - be they cultural, historical, or institutional - that produce hundreds of thousands of physically abusive and violent boys every year. Instead, we call upon the same tired specialists who harp about the easy accessibility of guns, etc. All of these factors are of course relevant, but if they were the primary answers, then why are girls, who live in the same environment, not responding in the same way.” With Columbine there was tacit mainstream understanding that these boys’ acts were symptomatic of an imperiled national heritage. Conversely, any time violence erupts in a black or Latino context it’s a racial indictment, an indictment of a community, not a nation. Thus, on the other side of the spectrum, the Gardena student was uniformly dismissed as a juvenile delinquent.

Suffice it to say, there will be no strenuous editorializing or earnest psychoanalysis of his motives for bringing the gun in mainstream media. He, after all, is a central casting black boy criminal from a “bad” school. Similarly, there will be no assessment of urgently needed mental health resources for young people of color who have lost friends and relatives to gun violence. By contrast, media coverage of Jared Loughner’s psychological profile has re-opened debate on the sorry state of American mental health care. After the Columbine shootings similar appeals for gun control, improved mental health services, and proactive parenting were made. Suspects from the “ghetto” only inspire a sense of deterministic inevitability.

On a KCRW Which Way L.A.? segment about the Gardena shooting, a 1991 alum of the school boldly proclaimed that “the smart kids don’t go to Gardena.” This belief drove the bootstraps mythology of generations of white flight South L.A. alums. And it has been inherited by the black and Latino middle class. Only expendable lives are wasted at public schools “ravaged” by white flight and urban “brain drain.” My talented, ferociously analytical students could break down the racist assumptions of meritocracy. But this smear resounds in a national climate dominated by the charter school tsunami and the demonization of so-called inner city schools. Here, it is tacit that time and progress left these schools behind. Brilliant youth of color are automatically condemned to second class citizenship and social pathology. The real epidemic of violence lies in this false indictment.

Sikivu Hutchinson is the author of Moral Combat: Black Atheists, Gender Politics, and the Values Wars (Infidel Books, February 2011).
Posted by Sikivu at 11:08 AM 1 comment: