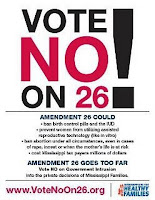 Taking its “life begins at conception” assault from State Legislature to State legislature, one of the most dangerous political forces in the U.S. is stepping up its crusade for the “rights” of the unborn. Backed by an organization called Personhood USA, the latest offensive by anti-choice Christian fascists involves a renewed movement to amend state constitutions to establish human rights and personhood status for fertilized eggs. On November 8th, Mississippi voters will decide the fate of Initiative 26, a personhood amendment that could precipitate the dismantling of Roe vs. Wade.

Ever immune to morality, reason, church-state separation precedents and an understanding of the basic laws of biology, the most flat earth reactionary segment of the pro-death anti-choice movement wants to circumvent constitutional protections for abortion by conferring personhood on fertilized eggs. This would eviscerate the premise that women have a sovereign and singular right to control their bodies by designating rights before implantation and a clinically viable pregnancy has been determined. For those who have any elementary grasp of the human reproductive process, conception does not automatically result in pregnancy and the vast majority of fertilized eggs never implant in the uterus. Yet if the egg crusade zealots have their way this new initiative would potentially criminalize any woman attempting to use birth control pills or IUDs, and jeopardize in vitro fertilization procedures and stem cell research.

We’ve been down this road before. In 2009, the egg crusaders were able to convince the North Dakota House of Representatives to pass a constitutional amendment on personhood. It was later vetoed by the State Senate. Colorado voters also rejected a similar ballot initiative 73% to 27%. New initiatives are being slated for Wisconsin, Florida and other states.

One of the most reprehensible arguments that the personhood campaign makes to bolster its cause is a comparison between egg rights and the movement to abolish slavery. The California campaign’s website cites Joshua Giddings, a 19th century American anti-slavery legislator who held that “God” as “author” of all life grants the inalienable right to life to every being. Following this argument it is unclear who is exactly “enslaving” pre-implanted fertilized eggs. Is it potential mothers who arrogantly lay claim to their own bodies? Is it the state for failing to protect the right of pre-implanted fertilized eggs to implantation? By cloaking its propaganda in the rhetoric of civil and human rights the movement avoids delineation of the real life consequences for women, once again reducing them to vessels with no agency, right to privacy or control over their own bodies.

This imagery draws from the same demonizing language evoked in the recent anti-abortion Radiance Foundation campaign targeting the “dangerous wombs” of women of color. The parenthood website does not specify what rights un-implanted eggs would be conferred with other than, presumably, the right to progress to the implantation stage, fetal development and then birth. There are no details about who or what could act on the behalf of the un-implanted egg as person if the host carrier (formerly known as mother) of the egg were to determine that she should receive medical treatment. There was no information on who would legally be empowered to intervene or act on behalf of the un-implanted egg as person (the state perhaps?) to object to any stance that the mother might take. It stands to reason that if contraception were used to prevent the inalienable right of the egg as “person” to implant then host carriers who did so would be criminalized and prosecuted for murder. As a preventive measure, potentially offending host carriers could perhaps be fitted with special ankle bracelets or encoded with state monitored electronic microchips to preclude violations.

The Catholic and fundamentalist Christian activists at the forefront of the egg crusade are curiously silent on these small details. In true schizoid fashion they push for special faith-based government entitlements and yet scream about government interference, rallying big government to run roughshod over women’s fundamental right to privacy through a new regime of policing. And indeed, their own “family planning” policies have proven an abysmal failure, as evidenced by the exploding teen birth rates in Bible Belt states like Alabama and Mississippi, in comparison to lower rates in the relatively godless Northeast and Northwest (abstinence-only sex education programs and fundamentalist Christian propaganda against fornication outside marriage would seem to be a source of cognitive dissonance for Southern teens).

The anti-human rights egg crusade would take this national obscenity one step further by deepening the region’s poverty and straining its already overburdened, family-averse social welfare net. Fortunately, Initiative 26 has elicited grassroots activism and backlash from groups as diverse as fertility rights organizations to Mississippians for Healthy Families to the National Advocates for Pregnant Women. The fervor of this “new” brand of anti-abortion activism only underscores the need for a vigorous secular defense against the continued incursions of the Religious Right. It’s either that or get ready for the ankle bracelets.

Sikivu Hutchinson is the author of Moral Combat: Black Atheists, Gender Politics, and the Values Wars.

From “Up Against the Wall” to

Up In Their Faces

On October 21st at 1 pm be at the State Office Building in Harlem as:

Everyone knows it is wrong. It is illegal, racist, unconstitutional and intolerable! But THIS FRIDAY people are putting themselves on the line to STOP IT. This is the beginning; this is serious; we won't stop until Stop & Frisk is ended.

Join the non-violent civil disobedience – OR – BE THERE TO BEAR WITNESS & SUPPORT!

They were carefree and besotted, joined at the hip, the epitome of a young couple steeped in the insular world of teen obsession. To some, 17 year-old Cindi Santana, and 18 year-old Abraham Lopez, the estranged boyfriend who beat and murdered her on the campus of South East High school in Los Angeles last week, were a perfect match. To others, Lopez was jealous and possessive, having been arrested in late September for threatening Santana. Santana’s murder highlights the deep and abiding threat that violent relationships have for young women. Although many LAUSD Health classes incorporate anti-violence education into their curricula, there is little emphasis on the roots of violence vis-à-vis dominant models of masculinity and femininity. According to a study conducted by Casa de Esperanza, Latinas often suffer silently from intimate partner violence due to religious, cultural and gender role socialization. A study by researchers from the Children’s Hospital in San Diego determined that 82% of Mexican-American women experienced “psychological aggression” during their lifetimes. The dominant culture’s glorification of violent masculinity in mainstream America, coupled with the emphasis on the Latino machista figure, and the Buena Mujer, or good woman, in many Latino cultures, strongly influence the self-image of Latino youth. Anti-feminist messages that a girl or woman is “nothing” without a man still pervade mainstream American culture with particularly insidious effect on teen girls of color. Tragically, the nexus of high intimate partner violence, sexual assault and HIV/AIDS contraction rates amongst black and Latino young women is a direct result of these anti-feminist messages. High poverty rates and racist social welfare policies that limit intimate partner violence resources and devalue or criminalize women of color victims also play a profound role. Latina undocumented immigrant victims may fear deportation if they utilize community victim services or seek refuge in shelters.

After making violent threats against Santana, Lopez was briefly arrested then released. Investigators from the L.A. District Attorney’s office failed to act on harassing texts Lopez sent, contending that the threats were not “imminent” and that the “victim took 18 hours” to report them. According to the L.A. Times, Santana’s mother informed the school principal about the threats.

Many in the South East High school-community have rightly faulted law enforcement for failing to notify the school about Lopez‘s arrest status. Yet the horrific beating and murder of this young woman demands that we ask what other preventive measures are being taken on the campus and in the District around anti-violence youth education and leadership for boys as well as girls. Violent boys see violence against women valorized at home, on TV, on the Internet, in video games, on their school campuses and in their social cliques. In the absence of countervailing messages, male violence becomes normalized.

As a former teenage victim of intimate partner violence myself, what little I know of Santana’s story is heartbreakingly familiar. At 17 I was beaten by a jealous boyfriend in broad daylight on a city street, although, in my case, onlookers stood by and did nothing. The deep shame and fragile self-esteem I felt prevented me from telling anyone. For many straight young women, having a boyfriend or a clinging admirer(s) is a game changer. In a culture in which most women’s film and TV roles still revolve around that of sex object/wife/mother, male attention is supposed to translate into female self-worth and legitimization. Boys who act the part of the jealous possessive male are simply aping the model of competitive ego-driven masculinity that all males are supposed to aspire to.

I mourn Santana’s death, both for what she had yet to become and for the young life her friends, family and community have insensibly lost. Her murder is another tragic reminder that the culture of violence against women will only be transformed through a humanist moral revolution that dismantles deadly gender norms.

Sikivu Hutchinson, Ph.D. is the founder of the Women’s Leadership Project, a feminist mentoring program based in South L.A. and the author of Moral Combat: Black Atheists, Gender Politics, and the Values Wars.
Posted by Sikivu at 8:45 PM