Planned Parenthood and the Rape of American Women

Lately, the sound of galloping hooves and rustling white sheets has risen in a deafening squall from the Capitol. Like their Klan ancestors, elite white males in Congress’ political lynch mob are once again savaging communities of color. The House’s vote to gut Planned Parenthood is a criminal act against poor and working class women and their families. In many rural and urban neighborhoods there are few affordable alternatives to the health care provided by Planned Parenthood and other reproductive rights service providers. These clinics are the frontline of preventive care in poor working class white communities and communities of color, providing pregnancy and STD testing, contraception, pap smears, abortions, and counseling for families with little to no health coverage.

Ever since its midterm elections’ sweep, the far right has ramped up its unrelenting drive to theocracy, using reproductive rights as its battleground. Drawing on the sabotage of ACORN, Speaker John Boehner and a host of other GOP and so-called Blue Dog Democrat fascists are bound and determined to take down Planned Parenthood. Extending Hyde Amendment restrictions on federal funding for abortions to private providers is central to their agenda. Too spineless to criminalize women who seek abortions outright, Religious Right politicians instead choose to pillage health care provisions that keep women from falling deeper into poverty, illness, and economic dependence. Hiding behind Orwellian claims of being pro-life, far right politicians exercise draconian control over the bodies of poor women and their families in the name of God, guns, and bloody fetuses. Why not just jail ‘em all and let God sort ‘em out?

It should be no revelation that when poor women are denied access to decent affordable reproductive care—including access to safe abortions—families and communities suffer. While federal and state governments dismantle education and health care funding, the American military regime goes untouched. Because black and Latino communities are on the frontlines of imperialist military recruitment and educational inequity, few people of color would argue that government handouts to the military industrial complex should trump education funding. However, reproductive justice just doesn’t have the same political cache or urgency amongst progressives of color. Consequently, conservative reactionary forces within the African American community have successfully allied with the Religious Right in a revived anti-abortion billboard campaign targeting black women. This propaganda has cropped up recently in black and Latino Southern California neighborhoods. By implying that aborting black babies makes them an “endangered species,” these billboards evoke plantation era regimes of social control.

In essence, bad “genocidal” black women don’t know their place, don’t know that they were put here to be God’s sacrificial vessels and don’t seem to grasp that only evil promiscuous misguided Jezebels get knocked up. They also haven’t gotten Sarah Palin’s “telegram” that women who are forced to have unwanted children will earn more, achieve higher education levels, and have a markedly better quality of life than women who aren’t. These ignorant bad black women destroy black communities with their arrogant self-absorption and unchecked sexual license. After all, black women who exercise control over their own bodies and destinies commit race betrayal and gender sacrilege.

How do we know these gospel truths? Powerful white male legislators, black preachers, and Christian soldiers like MLK’s anti-abortion activist niece Alveda King tell us so. They tell us that abortion is the greatest civil rights threat of our era. Like their Islamic fundamentalist comrades in the Middle East, these pro-death marauders know all too well that female sexuality is a dangerous commodity which only the jackboot of big government can control. Complicit with black hyper-religiosity and black nationalist delusions, silent progressives of color give them this license.

Sikivu Hutchinson is the author of Moral Combat: Black Atheists, Gender Politics, and the Values Wars (Infidel Books).
Posted by Sikivu at 10:23 PM 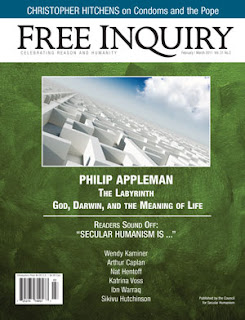 The con man claimed to be a devout man of God: the title “visionary” figured prominently on his business card. Going door-to-door with promises of easy mortgage-refinancing deals and claiming to have a direct line to the Lord, Timothy Barnett wheedled his way into the houses of elderly homeowners in South Los Angeles. Scared, vulnerable, and without a safety net, his victims lapped up his God-schlock like mother's milk. Isolated in modest homes they'd owned for decades, they welcomed his call to prayer. Like a nattily dressed inner-city Elmer Gantry, Barnett's hook was pitch-perfect: “Our Christian beliefs unite us in a common value system based on ethics and integrity. The nonbelief of non-Christians consigns them to immorality, making them more prone to duplicitous behavior and less worthy of your trust than I.” Kneeling in humble service to God and claiming the status of copilot, he stole the titles to five of his elderly victim's homes-and their “stake” in the American dream.

The Los Angeles Times reported that Barnett, a repeat felon subject to California's three strikes law, could be the first person in California sentenced to life in prison for a white-collar crime. MORE @FREE INQUIRY
Posted by Sikivu at 9:43 AM