Decriminalizing Truancy in the LAUSD 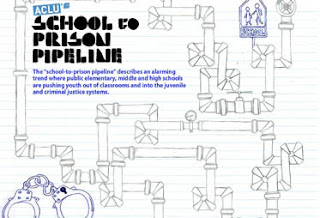 
Recently, in a class discussion about youth not having a voice at school, my students gave me an earful about racially disparate discipline policies.  They pointed to a culture of disrespect that they believe marginalizes and disfavors outspoken African American students.  For many, this culture is rooted in a policing regime that kicks in before they even get to school, buttressed by criminalizing truancy policies that disproportionately target black and Latino youth.  Over the past several years Los Angeles Unified School Police and the LAPD have handed out 88% of $250 truancy tickets to black and Latino students.  Blacks and Latinos constitute 74% of the student population.  Moreover, a significant number of youth of color in South L.A. schools such as Gardena and Washington Prep High Schools are homeless, in foster care and/or indigent.  So in what parallel universe does a low income student, a homeless student or a student in foster care afford a $250 ticket?  Clearly doling out tickets to students who are already faced with deep educational challenges is a recipe for disaster.  But the city’s current daytime curfew policy bolsters a culture of suppression and enforcement that further exacerbates the yawning achievement gap and feeds the school-to-prison pipeline.  It sends students the insidious message that being late for school is a criminal act, rather than a social issue which caring adult providers, families, and communities must actively redress in order to serve the needs of struggling young people.
Towards this end, Los Angeles City Councilmember Tony Cardenas introduced a Council motion that would revise daytime curfew laws to make them more culturally responsive to the needs of working class transit dependent students of color.  The motion was passed by the City Council’s Safety Committee on February 13th and will go to the full Council for a vote on February 21st.  It calls on the LAPD and School Police to end the practice of issuing citations with fines for truancy when minors are within range of their school sites.  It also requires that the LAPD and School Police collect demographic data on the population of minors cited for truancy infractions.  The Community Rights Campaign and allies such as Public Counsel and the ACLU are spearheading the effort to decriminalize truancy.  In addition to the City Council motion, the coalition is urging law enforcement and school officials to consider programs that emphasize restorative justice and non-punitive conflict mediation approaches to addressing truancy.  It is also recommending that school officials work with the MTA to develop policies that ease the burden on transit dependent youth who are often at the mercy of erratic bus schedules.  By framing truancy as a systemic issue informed by multiple social, economic, and educational factors, the Community Rights Campaign is part of a growing movement that has emerged to challenge long-standing institutionally racist and classist discipline policies that disenfranchise youth of color in the LAUSD.  Despite the 2008 implementation of the district’s so-called School Wide Positive Behavior Support System, egregious racial disparities in discipline are still rampant in the LAUSD.  The entire City Council should get behind this motion and send a strong message to LAUSD that its culture of youth disenfranchisement will not be legitimized by law enforcement’s suppression tactics on the streets.


Sikivu Hutchinson is the founder of the Women’s Leadership Project, which is based at Gardena and Washington Prep High Schools.  She is also the author of Moral Combat: Black Atheists, Gender Politics, and the Values Wars and the forthcoming Godless Americana: Race and Religious Rebels.
Posted by Sikivu at 12:35 PM

"If you are a Bible believing Christian yet,
you don't believe that GOD can and will take care of you
and your baby, HIS "gift" to you,
then you are calling HIM a liar!
Uh...do you really want to do that?"

This is God’s body, the girl says. She is one of a group of middle school students participating in a youth workshop on misogynist images in media. The subject has turned to abortion, and her peers nod vigorously in agreement. Imani Moses, a high school senior who is facilitating the workshop as one of my Women’s Leadership Project students, challenges her to examine her position—“does God sleep, eat, live in and control ‘this body’ 24/7?” She asks, pointing to her own body. “No, this is my body, and I control it.” A ripple of unease goes through the room, as the girls chew on Imani’s defiance. Making the leap from God to self-determination is blasphemous for some. Yet, the persistence of these beliefs underscores the special peril the current fight over abortion rights poses for women of color.

Over the past several years, Black and Latino fundamentalist anti-abortion groups have vigorously aligned themselves with the white Religious Right in the battle to takedown family planning. Indeed, the recent furor over the Susan G. Komen Foundation’s decision to withdraw funding for Planned Parenthood highlighted the role of Eve Sanchez Silver, founder of a little known group called the International Coalition of Color for Life. According to the Los Angeles Times, Sanchez Silver, a former medical research analyst for and charter member of the Komen Foundation, has been a leading advocate against Planned Parenthood within Komen.

The International Coalition of Color for Life frames its mission as “protecting minority life from birth to natural death.” Its website is chock full of shrill abortion-as-God’s-scourge propaganda. To bolster its claims that abortion is genocide images of Planned Parenthood founder Margaret Sanger are stamped with Nazi swastikas. Historically revisionist assessments of Planned Parenthood conveniently omit the connection many early 20th century progressive Black activists made between family planning, birth control, abortion, and black liberation. Tellingly, prominent Nazis like Martin Luther King, Malcolm X, Mary McLeod Bethune and Ida B. Wells supported Sanger’s controversial work with the Birth Control Federation of America. As African American historian Dorothy Roberts contends in her book Killing the Black Body: Race, Reproduction and the Meaning of Liberty, “Sanger (may have) adopted the eugenicists’ view of the dangers of racial deterioration…but she rejected their biological explanation for its cause…she held uncontrolled fertility responsible for bringing children into conditions of poverty and deprivation.” Roberts unpacks the nuances of Sanger’s views and policies, noting that “it appears that Sanger was motivated by a genuine concern to improve the health of the poor mothers she served rather than a desire to eliminate their stock.”

However, by using Sanger as a smokescreen to vilify abortion, anti-abortion foes of color are really savaging women’s right to agency. Twenty first century women’s liberation demands that women of color have safe, legal, and unrestricted access to abortion. As reproductive justice organizations like Sister Song have made abundantly clear, contemporary women of color are not serviceable wombs for the agenda of patriarchy, the state or organized religion. It is precisely because of right wing opposition to universal health care coverage that Black, Latina, Asian, and Native American women are more likely to rely on the wraparound health care services that Planned Parenthood provides. Yet, in chastising bad Black and Latino women about the genocidal evil of abortion, groups like the International Coalition of Color want to keep women of color grossly misinformed and subservient. In one especially fraudulent Power Point slide on the group’s website, Sanchez Silver claims that Komen’s “Pink Money Cycle” actually increases breast cancer in women because abortions cause breast cancer. This particular bit of right wing fantasy is just as reality-based as climate change denial. There is no scientific evidence that abortion causes breast cancer, nor is their medical research to back the pro-death anti-abortion lobby’s persistent claim that induced abortion (rather than spontaneous abortion, i.e., miscarriage, or “God’s” preferred form of abortion) is more likely to lead to death.

The National Cancer Institute (NCI) has refuted the claim that abortion increases a woman’s breast cancer risk. According to the NCI: “The relationship between induced and spontaneous abortion and breast cancer risk has been the subject of extensive research beginning in the late 1950s. Until the mid-1990s, the evidence was inconsistent. Findings from some studies suggested there was no increase in risk of breast cancer among women who had had an abortion, while findings from other studies suggested there was an increased risk. Most of these studies, however, were flawed in a number of ways that can lead to unreliable results. Only a small number of women were included in many of these studies, and for most, the data were collected only after breast cancer had been diagnosed, and women’s histories of miscarriage and abortion were based on their “self-report” rather than on their medical records. Since then, better-designed studies have been conducted. These newer studies examined large numbers of women, collected data before breast cancer was found, and gathered medical history information from medical records rather than simply from self-reports, thereby generating more reliable findings. The newer studies consistently showed no association between induced and spontaneous abortions and breast cancer risk.”

The fact remains that more women die during childbirth than they do from abortions. However, in the words of GOP patron saint Ronald Reagan, facts continue to be “stupid things” for Christian fascists. Thus the website also boasts that carrying a baby to full term protects women from developing breast cancer. Evidently if girls and women want to protect themselves from getting breast cancer later in life continuing a pregnancy by rape and/or incest is a viable immunizer.

Significantly, the Coalition of Color preaches a hellfire and damnation theme that is carefully crafted to exploit the cultural anxieties of “superstitious” people of color. Pregnant women who might be searching for reality-based options and resources for unwanted pregnancies are exhorted to just believe that God has a plan. The site claims that, “If you are a Bible-believing Christian yet you don’t believe that God can and will take care of you and your baby, His gift to you, then you are calling him a liar.” Bulging numbers of African American foster care and homeless youth are apparently the result of the unwillingness of apostate black women to cling blindly to faith in God’s plan. In California Black youth represent nearly 30% of the foster care population, 50% of the homeless population and 30% of those incarcerated in juvenile facilities. Yet Religious Right charlatans that preach an anti-government mantra are vociferously opposed to progressive health care, birth control, foster care and school discipline policies, as well as to repealing racist sentencing laws and prisoner reentry policies. Is the Coalition of Color willing to accept responsibility for the scores of poor children of women of insufficient faith? Or what about those holy rollers who trusted in God’s plan but can’t quite accept that experiencing rape and incest is a gift? Black and Latina women live in hyper-religious communities that have disproportionately high rates of rape and sexual assault. Restricting abortion access is clearly part of God’s plan.

Early Black and Latino family planning and abortion rights advocates understood that reproductive justice was crucial to dismantling racism and white supremacy. Christian fascists of color want to revert to a medievalism that would enslave and dispossess Black and Latino families and children, pimping women of color as Old Testament sacrificial lambs.

Sikivu Hutchinson is the author of Moral Combat: Black Atheists, Gender Politics, and the Values Wars and the forthcoming Godless Americana: Race and Religious Rebels.
Posted by Sikivu at 6:31 PM