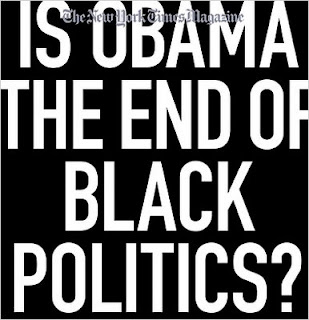 Inside a recent NY Times magazine story entitled “Is Obama the End of Black Politics?” four dapper African American male politicians are posed in conversation mode, pontificating on the fate of black America. Emboldening those who would declare black resistance a throwback to a bygone era, the article questions the viability of a race focused political agenda in the potential wake of Obama’s election to the presidency. Throughout the piece traditional civil rights movement politics were contrasted with the race neutral (i.e., assimilationist) approaches of younger politicians like Obama. Echoing CNN’s flaccid special on Black America, the NYT’s snapshot is one of black “bourgie-dom” uneasily holding the urban pathology of poor blacks in the ghetto at bay. The problematic focus on male politicos trying to be post-black under apartheid conditions reflects the usual corporate media paternalism. In this brave new post-black world charismatic black male leadership (with women cheerleading on the sidelines) is still the currency of black political capital as affirmative action devolves into redress for white Appalachians.

The so-called “end of black politics” monolithically defines the terms of black leadership as constituent politics divorced from community organizing and a vision for redressing the structural consequences of segregation. This is a particularly egregious premise considering the scores of black communities devastated by the sub-prime mortgage crisis. Drive through any neighborhood in South L.A. and the sea of for sale signs flapping on the lawns of single family homes is a powerful visual symbol of the foreclosing of the black American dream. While traditional channels of white upward mobility exclude most African Americans, homeownership has alway s been both crucible and preserve of black stability in the face of centuries of violent dispossession. So the anemic response of mainstream black politicians to a crisis which has been dubbed the largest loss of black wealth in American history is especially troubling given the lip service that many of these politicos pay to middle class self-determination.

The only presidential candidate to address the subprime mess from an economic and racial justice standpoint is Green Party candidate Cynthia McKinney. Following the lead of Shirley Chisholm’s good old boy challenging candidacy in 1972, McKinney has consistently linked the hijacking of black neighborhoods by predatory lending with gentrification. McKinney’s critique of gentrification defies the see no evil development friendly approach of Barack Obama. The loss of scores of older homes and apartment buildings to gentrification has deracinated African American and Latino communities while remaking neighborhoods once deemed undesirable—such as the western part of downtown LA. and Brooklyn’s Clinton Hill—into real estate rich yuppie enclaves. As progressive housing analysts have noted, the mortgage crisis has effectively reversed the increase in black home equity which grew out of a decades’ long effort to redress racist Federal Housing Administration lending policies that bankrolled postwar white flight to the suburbs. Although white homeowners also face record losses in equity, their communities are not rooted in the inveterate urban poverty and underdevelopment that devalues black and Latino property. With lower property values to begin with, black homeowners are in a free fall, at the mercy of piecemeal bailout plans like the recently passed housing recovery legislation championed by the CBC, which would only help 400,000 homeowners and contains a few provisions for remedying blight in neighborhoods with heavy foreclosures.
As billions in black equity is sucked down the drain, bankrupt racist prophecies about post-race, post-black politics are really about sanctioning the looting of black wealth.

Sikivu Hutchinson’s commentaries can be heard on Fridays @6:25 on KPFK 90.7FM
Posted by Sikivu at 8:06 AM No comments:

Turning Back the Clock: The Dropout Crisis and the Wages of Whiteness

Imagine, if you will, a parallel universe in which George W Bush is educated in a poor urban school where he is taught that people that look like him made history; while his black and brown classmates are policed and criminalized, warehoused in foster care and prisons and objectified in a 24-7 menu of hypersexual, criminal imagery. In this parallel universe Dubya, a less than mediocre student lacking the benefit of a legacy admission, drops out of high school and tries to find a living wage job. Armed with a middle school diploma, a prior felony conviction and one broken bootstrap, Dubya remains unemployed until a grill position opens up at the local Rally Burger. As a working class white dropout ex-con, Dubya would naturally take his place at the head of the line for any job over black men with college degrees. His rise to imperial ex-con would be complicated but not prohibited. For what In answer to your questions: distinguishes white dropouts from black and brown dropouts is the wealth of cultural capital that the curricula of school and life confer onto whites regardless of class. Even the poorest whites see themselves reflected in the founding myths of this country, see themselves as hell or high water citizens and know implicitly every time they flip on a TV, watch a movie or pick up a newspaper that people who look like them are represented on every rung of the global media hierarchy.

The conferral of social advantage onto even the most economically disadvantaged whites fuels the underclass status of young blacks and Latinos. Last month, when the California Department of Education published yet another dismal report on the dropout crisis among black and brown students there was little media focus on the social costs of educating young people of color.

With no safety net, institutionally racist curricula, rote instruction, and deadening high stakes tests it is not difficult to see why so many black and brown students are dropping out of the system. Band-aid approaches like the LAUSD’s dropout recovery and prevention program don’t address students’ mis-education. At Gardena High School, one of the schools on the over 40% dropout list, the four year college-going rate is abysmal, the number of opportunity transfers is high and black students comprise 60% of school suspensions. Despite the district’s bluster about preparing students for college, many of the students in the leadership program I run at the school are not even aware of A-G college preparation requirements until the topic is introduced in our sessions. Enrolling in A-G classes is one thing, but navigating them successfully requires teachers and counselors who are politically invested in the culturally specific needs of black and brown students. Making teaching and curricula relevant to students and institutionalizing the exemplary work of the hundreds of teacher leaders who do so should be the district’s mandate. Barring that, students who face challenges like caring for siblings, living in foster care, working after school jobs and surviving teachers who believe that black students are deficit-laden are especially vulnerable to dropping out.

As the economy worsens, the importance of having at least an undergraduate degree will magnify for people of color, particularly for younger blacks who now fare worse than their parents’ generation with regard to earnings, savings and education. Turning back the clock on Brown v. Board even further, many young blacks are living the American nightmare, sold out by Schwarzenegger’s slash and burn budget and the national trust that pays the wages of whiteness.
Posted by Sikivu at 2:02 PM No comments: When Barack Obama accepts the Democratic Party’s nomination for president at its convention in August he will do so in an atmosphere where precious few people that look like him have been invited to join the punditocracy. Although bloggers have been admitted to the Convention in record numbers, in typical plantation politics only a limited number of bloggers of color will be at the table. According to Frances Holland of the Afrosphere Coalition, black bloggers represent a mere 7.2% of those attending. So on the ground commentary about this historic moment will be largely confined to a select group of white bloggers. The media white out of black voices is not surprising given the cherry-picking of commentators of color on the pundit-driven evening talk shows. Though outlets like CNN and MSNBC have been prompted by the cache of the Obama candidacy to include more faces of color in their white palette, the general tenor of these voices, with few exceptions, is mainstream and corporatist. Even avowedly liberal leaning shows like MSNBC’s Countdown with Keith Olbermann stick to a quota of one East Coast black journalist a week to round out its critical commentary on the misdeeds of Bush and the reactionary right.

Indeed, the Obama candidacy has demonstrated the old adage that the more things change the more they stay the same, and that left/right labels have very little meaning when it comes to equitable inclusion of commentators of color. In 2005 Fairness and Accuracy in Reporting released its annual diversity in media survey which not surprisingly found that women of color were all but nonexistent in the TV punditocracy due to the preference for white women and men of color. Fast forward to 2008 and women of color are ghettoized to commentary on race-related themes pertaining to the election, only to vanish when the topic is foreign policy or the economy. Whatever the deficiencies of the blogosphere, it is one of the only mechanisms to chip away at the preserve of white male media supremacy in which a few anointed talking heads and issues framers are allowed to dominate cable, network and online news. Despite his rhetoric about the multicultural inclusiveness of American democracy, Obama has turned a blind eye to the very un-inclusive composition and framing of mainstream newscasts which rake in millions for their corporate sponsors.

So the white out at the Convention is yet another potent reminder that merely having a black face at the helm of the Party is no antidote to black media invisibility.
In fact, as the nation enters the Obama era the power to shape opinion on civil liberties and social justice will become even more crucial due to the perception that Negroes have been fully emancipated and that racial inequities are a thing of the past. The election of a black president will further embolden the anti-affirmative action and anti-equity propaganda of conservative media and public policy makers. Since his rout of Hillary Clinton, Obama’s problematic support of immunity for wiretapping under the FISA bill, his unqualified endorsement of Bush’s faith-based initiatives and his deafening silence on drug sentencing reform suggest that he is increasingly willing to bend and twist the legacy of the civil rights movement to pander to the center. While many black folks are already celebrating his victory as a salutary moment in history they would do well to heed the Democratic committee’s decision as a powerful reminder that the Head Negro in Charge syndrome is alive and well.

Sikivu Hutchinson is the editor of blackfemlens.org and a commentator for KPFK 90.7 FM
Posted by Sikivu at 12:58 PM No comments: