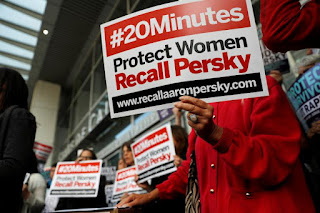 Last week, when former Stanford athlete and convicted sex offender Brock Turner walked out into the California sunshine to the arms of his nervous parents his status as a lightning rod for outrage over the U.S.’ rape culture complicity was solidified. After serving three months of a lenient six month sentence handed down by disgraced white Santa Clara judge Aaron Persky (the subject of a vigorous recall campaign), Turner is now the poster child for new legislation that would redress longstanding inequities in rape reporting and awareness which promote victim-blaming, shaming and predatory “boys will be boys” behavior.

AB 2888 would require that the sexual assault of an unconscious victim carry a mandatory minimum sentence.  It was overwhelmingly supported by Democrats and now awaits the approval of Governor Jerry Brown.  In addition to AB 2888, California’s SB 813, dubbed the “Justice for Victims Law”—which was introduced by State Senator Connie Leyva and inspired by women who were allegedly sexually assaulted by Bill Cosby—is also pending before Brown.  SB 813 would eliminate the statute of limitations for criminal prosecution of rape and sexual assault.

Of course, Turner is part of a long legacy of white rapists that have eluded justice, but the firestorm around his case reflects a genuine shift in consciousness prompted by generations of organizing against rape and sexual assault.  Yet, needless to say, the response to Turner’s crime and Persky’s transgression stand in stark contrast to what generally happens after a campus rape.
In comparison to the scores of poor women of color who experience rape and sexual assault, Turner’s victim was relatively privileged.  The intersection of race, class and gender, combined with growing awareness of the gross double standards afforded white offenders in the criminal justice system, made this case a national and legislative cause célèbre.  Yet, the victim’s privilege as a white female student at an Ivy League university did not shield her from the legal apparatus of patriarchal white supremacy.  It is estimated by the Rape and Incest Survivors Network (RAINN) that only six of one thousand rape cases ever make it to a trial that ends in conviction and jail time.  And these numbers are not disaggregated by race.  According to RAINN, college student female rape victims are the least likely (in comparison to women in the military, elderly and non-student college-age women) to report sexual assault.

Such reporting disparities are no mystery, given that the dominant culture tells African American women rape victims that they are solely to blame for being in the wrong place at the wrong time with the wrong crowd, consuming the wrong things, behaving in the wrong way.  Black women are not only subject to disproportionate sexual assault by black men, but may be policed, criminalized and discredited by law enforcement when they report being sexually assaulted.

Recently, in an interview with KPFA radio, activist Aishah Simmons discussed the need to take activism against rape culture to the streets and classrooms.  Simmons’ acclaimed documentary “No!” is a must for culturally responsive curricula on sexual assault prevention education.  In the film, black women from all walks of life discuss their experiences with sexual assault and rape, connecting them to prevailing white supremacist, misogynist myths about black women’s sexuality, morality and femininity.  The commentators powerfully debunk insidious historical notions about the “unrapeability” of black women and identify the ways men of color have internalized these images.

This fall, the South L.A.-based Women’s Leadership Project for high school girls of color will be conducting sexual harassment and sexual violence prevention outreach with high school athletes and ninth grade health classes.  Students will participate in peer-facilitated trainings designed to unpack the victim-blaming, victim-shaming, complicity and silence that allows sexual assault and rape to thrive as cultural norms. While there has been a mandatory push for restorative justice alternatives in large public school districts like the Los Angeles Unified School District, sexual violence prevention education remains sparse and piecemeal. Indeed, far too often in the everyday climate of K-12 schools, girls of color in particular are admonished by adults about how their “distracting” dress, behavior and attitudes are really subtle provocations for boys to act “badly”.  At the end of the day, the culture that spawned Brock Turner is not changing fast enough for victims who don’t have the benefit of Ivy League notoriety.  And while pending legislation may strengthen prosecution of rape and sexual assault, the crisis in prevention demands that all school communities become accountable for dismantling the culture of male privilege, sexism, misogyny and misogynoir that allow rape to thrive.
Posted by Sikivu at 7:50 PM