Be Afraid, Be Very Afraid: Gender Politics and Palin Propaganda

With her rifle on one hip and baby Trig on the other, Sarah Palin’s tabloid VP candidacy proves that only in America could a flat-earther who espouses antediluvian policies consigning women to second class citizenship be hailed as a feminist icon. The fierce cult of celebrity worship that has sprung up around the Palin nomination has displaced any serious mainstream critique of McCain’s lock step march with Bush-style imperialism. In her recent interview with ABC’s Charlie Gibson Palin’s ignorance of the so-called Bush doctrine of preemptive defense and her reflexive get tough on Muslim extremists swagger was enough to inspire a run for Canada. While the heartland swoons for Palin, allegations of scandal, double dealing, racist slander, civil liberties infringement and bug-eyed Christian fundamentalism continue to bounce off Palin’s Teflon power blazers because unrepentant reactionary white femininity suddenly has fresh currency in national politics. Let’s break it down—the Palin choice was a transparently racist bid for the votes of white women enraged by the prospect of a black man in Hillary’s White House. When Palin burst onto the national scene proclaiming that “the women of America aren’t finished yet” she clearly wasn’t thinking about inviting women of color into her sister friend council because Black women are certainly not having it. Had it not been for the success of Clinton’s race-baiting appeals to hard working white Americans a white female candidate would not have been seriously considered for the Republican ticket. Thus far Clinton has remained muted in her criticism of Palin. According to Clinton insiders, she has no intention of directly addressing the implications of the Palin candidacy nor of urging her white female supporters to look past the sisterhood hype.

In a reality show besotted culture that fetishizes white female soap operatics in rags like Us magazine, People, and the National Enquirer it is not surprising that the Palin sideshow is playing big in Peoria. The GOP’s silence about Palin’s pregnant teen daughter’s departure from the traditional family values script highlights its racist hypocrisy. For, clearly, had the Palin family soap opera played out in the Obama household his bid for the presidency would have been gutted by right wing hysteria about promiscuous black welfare mothers in training and irresponsible baby daddies. For white folk though, the national narrative of family has always extolled the kinder gentler virtues of “tolerance” about life’s “circumstances.” Middle and working class white families that experience an unplanned teen pregnancy in the public eye garner sympathy and disease of the week prime time TV while families of color elicit policy screeds about immorality.

Having benefited from the women’s and civil rights movements while touting anti-choice policies and abstinence only education, Palin is a poster child for GOP-style affirmative action for white women. But the insidious reversals don’t end there. McCain has attacked recent comments Obama made comparing McCain’s policies to putting lipstick on a pig as a sexist slam of Palin. This from a candidate that has endorsed the Bush administration’s savaging of family planning, pro-choice, anti-domestic violence legislation and equal pay for equal work policies that support real women with families that aren’t blessed with the divine providence of oil dividends. The McCain-Palin ticket’s attempt to portray itself as a maverick change agent is akin to Orwell’s totalitarian metaphor two plus two equals five; that is, if we speak in tongues enough times to a captive audience in defense of the homeland it will be true, and Oceania has, and always will be, at war with East Asia.
Posted by Sikivu at 7:41 AM No comments:

The School to Prison Pipeline 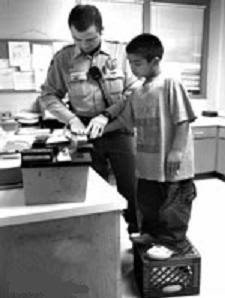 
As euphoric images of post-racial unity from the Democratic National Convention recede, it is worth recalling the heady sentiments of the 2004 convention speech which launched Barack Obama into the public eye. Proclaiming that there was no “black, white, Latino or Asian America” just the United States of America, Obama captured the imagination of a white Democratic electorate weary of the messy racial dust-ups of the Rainbow Coalition era. The historic nomination of Obama in the 45 year anniversary of King’s "I Have a Dream" speech has been embraced by some as a full circle realization of a future of black and white children holding hands. Yet in all of the Convention's Americana electionese there was nary a word about the fact that much of America’s future is being warehoused in prisons. If we just waved a magic wand a black South L.A. high school student would enter the ninth grade with the same access and cultural affirmation as a working class white child from, say, Scranton, PA. If we just waved a magic wand that same child would go through four years knowing that the rhetoric of “one America” is more than a seductive fantasy belying the prison pipeline that urban youth are initiated into when they are bounced out of school for discipline problems. If we just waved a magic wand none of the students in my high school classes would stand during a discussion icebreaker when asked if they have a friend or relative who is either on parole or currently incarcerated. Often deep into their row by row cliques of playing the dozens, disguising their intelligence and vulnerability, black and Latino ninth and tenth grade boys who were otherwise bashful about speaking out in class related that they were routinely harassed as gang members or drug dealers in encounters with the police. Many of them have internalized this treatment as part of a soul devouring male rite of passage. But having been subjected to racial profiling, juvenile detention and harassment on their campuses, the bond of criminalization is shared by both black and brown students who sit side by side yet may otherwise be miles apart in their cultural outlook. With precious few resources inside the classroom that educate them about their rich shared history and shared struggle, many black and brown students are united by the crucible of living in occupied communities. Occupied communities that are not just paramilitarized by law enforcement but by the regime of mass media that destroys the self-images of youth of color.

With one of the most incarcerated populations on the planet, California voters are now being asked to consider yet another proposition that would further criminalize youth of color. The Runner Initiative, or Proposition 6, has been targeted by youth justice and civil rights organizations across the state for its proposed diversion of funding from education and social services to more incarceration and sentencing for youth. The passage of this initiative would have a devastating effect on black and Latino communities already laid waste by the prison industrial complex. But as the law and order right becomes more strident similar initiatives will crop up nationwide.

It remains to be seen whether an Obama administration would redress the national disgrace of the school to prison pipeline. Certainly this is the real twenty first century challenge of King’s legacy.
Posted by Sikivu at 8:47 AM No comments: