Bootstrapping Out of the Police State

While the mainstream media have rushed to commend the LAPD for its progress on reform, the rescinding of the consent decree is a criminal sham. According to a 2008 report commissioned by the ACLU on LAPD policing, African Americans are still more likely to be stopped driving while black, ordered out of their cars, frisked, searched and of course arrested than are whites. The report further confirms what community watchdogs and even the Department of Justice concluded about police stops: namely, that stops of blacks and Latinos don’t produce any more weapons, drugs or other contraband that would even justify these measures from a pure enforcement standpoint. Police and sheriffs’ departments essentially waste millions imposing military control on black and Latino motorists. So where are the white fiscal conservatives and live free or die libertarians who bemoan these excesses of big government? Enjoying the entitlements of driving while white.

The consent decree was imposed after the 2000 Rampart scandal, an era in which the wages of whiteness expanded dramatically under Bush’s anti-civil liberties rampage. Even the black elite, who dutifully applauded President Obama’s self-determination pep talk at the NAACP’s annual convention, continue to be reminded of the occupational hazards, or black tax, of working, traveling, driving and even trying to enter one’s house while black. Last week, esteemed Harvard professor Henry Louis Gates became reacquainted with the black tax after being arrested by Cambridge police for having the audacity to break into his own home. Despite producing his Harvard i.d., drivers’ license and possibly his dental records to the white police officer, Gates was handcuffed and jailed. It is impossible to imagine eminent white academics like Howard Bloom or Stanley Fish “perp walking” away in handcuffs from their own residences. Gates’ arrest is yet another example of the fallacy of claiming class oppression trumps racial oppression in our post-racial Obama universe.

Being free of the threat of criminalization enhances the mental health and wellbeing of whites of any class. Not being defined and treated as a racial other is an inarguable class advantage. Not knowing the trauma of being programmed to seize up in fear and anxiety at the mere sight of a police car is a form of entitlement. Not growing up with a notion of home and community as occupied territory is, as W.E.B. DuBois framed it, cashing in on the public and psychological wage of whiteness.

Shaking off the cobwebs after decades of being MIA, the NAACP has pledged to make over-incarceration the centerpiece of its new agenda. It is possible that it may find a willing partner in Attorney General Eric Holder, who has articulated some degree of commitment to redressing racially disparate sentencing policies. Possible but not probable, for his boss has become so adept at dismissing the brutal specificity of black disenfranchisement that it has become part of his resume. And as preached by Obama, Bill Cosby and other neo-Booker T. Washington acolytes, all the self-determination bromides in the world won’t empower African Americans to bootstrap their way out of a police state that has claimed so many lives.

Sikivu Hutchinson is the editor of Blackfemlens.org and a commentator for Some Of Us Are Brave: A Black Women’s Radio Show on KPFK 90.7 FM.
Posted by Sikivu at 6:29 PM No comments: 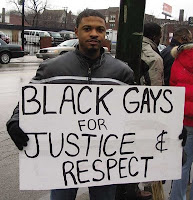 Last year’s debate over California’s Proposition 8 exposed deep racial fault lines around the issue of same sex marriage in African American communities across the state. After polls showed an overwhelming number of blacks supported the initiative some liberal whites came out swinging, blaming blacks for the initiative’s defeat in racist diatribes against African American hypocrisy on civil rights. Black religiosity and social conservatism were deemed to be the “culprits” for the failure of same sex marriage to galvanize mainstream black support. As marriage equality advocates of color gear up for another organizing offensive in the wake of the California Supreme Court’s decision upholding Prop 8, it is abundantly clear that when it comes to gay rights, bucking the black religious establishment on civil rights “orthodoxy” continues to be a third rail issue. Exhibit A in this quagmire is the Southern Christian Leadership Conference (or SCLC, the civil rights organization once headed by Martin Luther King Jr.), which recently threatened to fire Los Angeles chapter head the Reverend Eric Lee for his outspoken advocacy of same-sex marriage.

The SCLC’s rebuke of Lee reflects a recent L.A. Times poll that showed 54% of African Americans remain steadfastly opposed to same-sex marriage. In this regard straight privilege and religious privilege have converged in a decidedly unholy alliance. The tiresome debate over whether gay and lesbian liberation struggle is a “civil rights” issue hinges on proprietary claims to the civil rights movement legacy that supposedly only straight black folk are entitled to. According to this logic, equality for gays and lesbians isn’t a civil right because there were no state sanctioned segregation laws barring gays and lesbians from employment, schools or housing—an argument which is just as absurd as asserting that gender equity is not a civil rights issue because there were no poll taxes, grandfather clauses, or literacy tests for white women at the voting booth before 1920. In this reductive universe all women are white and all gays are white, and the notion that systematized oppression, as well as systematized privilege and entitlement, intersect via multiple identities is unheard of. Yet black gay and lesbian slaves worked in the plantation house and fields alongside straights while having their lives, identities and right to love tacitly if not violently suppressed by a regime that brutally exploited black reproduction. Black gay and lesbian youth sit in classrooms where they are ritually called out of their names, dehumanized by harassment that passes for harmless jocularity and rendered invisible by cultural norms that equate attractiveness, social acceptance and authentic masculinity and femininity with being heterosexual. And black gay and lesbian partners live in segregated neighborhoods, struggle with unequal access to health care and housing while being denied the privilege of marital benefits to give them a leg up in society stratified by race, gender, sexual orientation and class.

Conflating biblical literalism with morality, Christian partisans condemn same-sex marriage as blasphemy while conveniently rejecting the archaic racial hierarchies that the Bible espouses. Black preachers sanctimoniously opine about the “hijacking” of the civil rights movement legacy while effectively turning a blind eye to the disenfranchisement of their young gay, lesbian, bisexual and transgendered congregants, who suffer disproportionate rates of suicide and depression simply because of the dominant culture’s denial of their fundamental personhood.

For far too long, the more conservative segments of the black church have been allowed to function as the unquestioned moral arbiters of marriage, sexuality, child-rearing and cultural mores. Rather than representing one and only one world view within African American communities-which have their own secular and atheist traditions-the conservative religious civil rights orthodoxy has been enshrined as the prism for black perspectives. Admittedly, Eric Lee and his counterparts are in the minority of those within the black Christian community principled enough to go on record against the anti-gay rhetoric of the pro-Prop 8 coalition. Yet this leadership is crucial to a civil rights movement based on intersectionality, a consciousness of the complexity of African American identity and community in repudiation of the bigoted flat earth ethos that has made silence around black homophobia morally and socially acceptable.

Sikivu Hutchinson is editor of blackfemlens.org and an advisory board member of the Washington D.C.-based Human Rights Campaign’s Welcoming Schools curriculum guide on family diversity, gender stereotyping and anti-LGBT bullying.
Posted by Sikivu at 4:45 PM No comments: