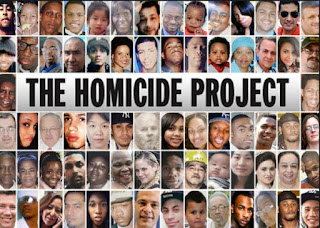 In 1979, they handcuffed Eulia Love while she was dying on her front lawn.  In 2015, they handcuffed Redel Jones and let her die on a public street as a throwaway woman with no rights a white man was bound to respect.

On Tuesday, hundreds of demonstrators from Black Lives Matter, the Youth Justice Coalition and other organizations packed the Los Angeles Police Commission meeting to protest the officer-involved killing of Jones, a young African American woman murdered in cold blood last year after allegedly advancing on officers with a knife in a Baldwin Hills alley.  According to the LAPD, the confrontation with Jones occurred after a suspect “who fit her description” committed a robbery.  Eliciting widespread outrage, the Commission egregiously ruled that the killing of Jones was “within policy” because officers were in “fear of their lives”.  Contradicting the police’s grotesque default narrative of the violent black predator, one eyewitness to the killing stated that Jones was moving away from the officers.  The Commission did not disclose why it was necessary to use deadly force to subdue a woman wielding a knife.

Jones’ murder last spring marked the flowering of the #Sayhername campaign, the national call for justice in resistance to the terrorist victimization of black women under state violence.  Her murder, and the community response thereafter, is hauntingly similar to that of Eulia Love, a 39 year-old African American woman who was murdered at her South Los Angeles home by LAPD officers on January 3, 1979.  Love was alleged to have rushed the officers with a knife during a dispute precipitated by an earlier confrontation she’d had with a utility worker. The officers who killed her fired approximately twelve rapid fire shots at a range of eight and twelve feet.  Her murder elicited mass community protests and was initially ruled to be within policy by the LAPD’s “Shooting Review Board”.  This determination was later challenged by the Police Commission, which concluded that Love’s shooting “failed to meet departmental standards”.  In the aftermath of the killings, the notorious Chief Daryl Gates claimed that the white officer who shot Love was “just as much a victim of this tragedy as (she was).” Gates, the nemesis of the African American community, was a sneering law and order fascist who presided over a police department nationally renowned as the standard for state sanctioned racial terrorism and suppression. Under Gates, the department’s “pioneering” forays into militarization were institutionalized, as use of battering rams, SWAT teams and riot gear became the norm for police departments across the nation.
Love’s murder represented a turning point in the deep history of black LAPD murder victims. Weeks after her death, her killing initially generated little more than an obscure paragraph in the L.A. Times.  But in order to fully honor and SayHerName it’s important to acknowledge her wholeness.  Before she was killed, she was a mother of three daughters and a recent widow struggling to survive on a limited income. She lived in a single family home in a neighborhood abutting what is now the 105 freeway; one that had weathered the turbulence of the 1965 Watts Rebellion and the downward economic spiral of South Los Angeles.  Her anxiety over paying an overdue gas bill was almost certainly exacerbated by these factors, and the appearance of a male Gas Company representative in her backyard to shut off service.  According to an Assault with a Deadly Weapon (ADW) report filed by the representative, Love hit him with a shovel to keep him from shutting off her service. The rep then called the police, who drew their guns shortly after arriving, tragically, while Love’s young daughters were in the house.
In the case of white assailants, it’s standard for law enforcement to use extensive de-escalation techniques—including negotiating with suspects, bargaining for time, retreating, using tasers and other non-lethal strategies.  As evidenced in mass shootings like those in Aurora, Colorado, Charleston, South Carolina and the 2015 Colorado Springs abortion clinic shooting (as well as with the recent Oregon National Wildlife Refuge standoff involving domestic terrorist Ammon Bundy), it’s pro forma for even the most violent white assailants to be captured alive despite brandishing military style weapons.
The 1980 Police Commission report on the Love case concluded that LAPD officers Edward Hopson (who was black) and Lloyd O’Callaghan (who was white) talked to Love for a scant two-three minutes (rather than the seven minutes erroneously reported by the LAPD Shooting Review). Contrary to the Shooting Review report, the Police Commission concluded that the officers had not been prompted to use deadly force due to concern for the wellbeing of Love’s daughters; nor had they come to arrest Love for the alleged assault of the Gas Company worker.  Rather, they perceived Love as an a priori threat, one that was disproportionate to the situation.
Departmental policy stated that “officers should not draw their weapons based on a mere feeling of apprehension”.  Although Love was wielding a knife, she was retreating from Hopson and O’Callaghan when they opened fire on her.  The report further states that techniques for disarming an individual with a knife include kicks and baton hits. Moreover, “In choosing a technique, the relative size of an individual and his or her mental state” are also primary considerations.  In both the Jones and Love cases, none of these factors apparently informed the police’s decision to use deadly force.  Because Hopson and O’Callaghan emerged from the police vehicle with their guns drawn, escalation of Love’s already agitated emotional state was virtually a foregone conclusion.  In the final moments of the confrontation, Love allegedly hurled the knife at the officers.  However, “By advancing on Ms. Love as she attempted to retreat, they put themselves in a situation of increased danger”.  Use of deadly force became a self-fulfilling prophecy which robbed Love of her live and shattered those of her young children.
In his testimony to the Police Commission, Redel Jones’ husband Marcus Vaughn spoke eloquently about how she was a caring mother and compassionate woman who always sought to help others.  While “crazy” armed white women elicit sympathy, psychoanalysis and humanizing back stories (ala the white Texas woman who recently shot and killed her two daughters after years of police service calls to their home with no arrests), the narrative of the psycho black woman with a weapon is always a cut and dried case of criminality.
After Hopson and O’Callaghan pumped twelve bullets into Eulia Love’s body they rolled her over and handcuffed her on the grass of her own front yard.

After Redel Jones was murdered she lay in a morgue for two weeks without her family being notified, Vaughn told the Police Commission.