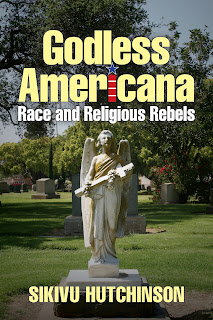 From The Humanist Magazine

"Godless Americana is an incredibly provocative book, containing something to infuriate practically anyone who reads it. And I suspect that the author wouldn’t have it any other way."

Sikivu Hutchinson is an author and activist who promotes a progressive—and aggressive—conception of humanism that is at once feminist, anti-racist, anti-homophobic, anti-classist, and anti-imperialist. She has no patience for nontheists who focus primarily on church/state separation, evolution, and other issues that, in her view, are being promoted particularly by white males within the secular movement. In response, Hutchinson asserts that humanism will only appeal to the masses of “people of color,” women, LGBT individuals, and other historically oppressed groups if it addresses structural and systemic causes of poverty and oppression.

Godless Americana is an impressively researched book that deals with a number of subjects that most nontheists rarely, if ever, discuss at their gatherings or in their literature. For instance, the book makes the case that many white humanists tend to blindly, even proudly, embrace scientism. While noting the importance of science, Hutchinson calls attention to the fact that racism exists in science and in medicine. Moreover, she challenges the notion that black girls aren’t interested in science due to hyper-religiosity. Rather, she states that the contributions of scientists of color are simply not touted in textbooks and lesson plans.

In her hometown of Los Angeles, Hutchinson acknowledges the lack of Advanced Placement (AP) courses for black and Latino high school students. However, students taking these courses are much more likely to earn degrees in hard sciences and engineering. Hutchinson writes:

In 1999, students from the Inglewood Unified School District in Los Angeles successfully sued to get more AP courses at their schools. The suit charged that black and Latino students were systematically denied access to college preparation courses that were standard fare at white schools in Los Angeles County.

In a related story from Bartow, Florida, sixteen-year-old student Kiera Wilmot mixed together toilet bowl cleaner and aluminum foil in a science experiment at her school earlier this year. As a result, there was an explosion. The Bartow Police Department, the Polk County Sheriff’s Office, and Bartow High School pressed two felony charges against her. Feminists and civil rights activists protested vehemently, claiming it was just another example of the cradle-to-prison pipeline that exists for African Americans and society’s failure to encourage black girls to pursue science...More @ The Humanist Magazine

ANOTHER WHITE WOMAN HAS GONE MISSING 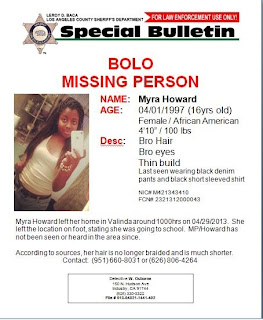 A few nights ago around 11:00 p.m., virtually everyone in the state of California was abruptly jolted into consciousness by a shrill cell phone blasted Amber alert about the abduction of a teenage white girl by a 40 year-old male. Privileged victim Hannah Anderson (who the media obsessively tell us is blond and blue-eyed) now joins the lily white ranks of “all-American” girls whose fate is an urgent issue of national security. Breathless, obsessive, round the clock updates and international coverage have been given to this unfolding drama. This is what I wrote about the phenomenon in 2005 and not a damn thing has changed:

When the news broke earlier this summer about the disappearance of Alabama teenager Natalee Holloway in Aruba, I braced myself for yet another tide of hysterical media coverage about the uncertain fate of a young suburban white woman. I was not disappointed. Consumers of network, cable, and Internet news were treated to a steady stream of obsessive details about Holloway's life, the last hours she was seen, her family and home community, echoing a pattern that has increasingly come to resemble a by the numbers formula for conferring national heft to the lives of formerly obscure white women.

Back then, criticism from media watchdogs and families of abduction victims of color resulted in an NBC Dateline segment on racial disparities in network news treatment of missing persons' stories. The bias charges elicited the usual head-scratching deflection and outright denial from news executives. Some of those who were willing to go on the record countered that abduction stories that become national news are generated by momentum from local affiliates. Naturally most network execs see little bias in their coverage because whiteness represents the norm in American culture. White lives, white families, white communities, and the world views of white pundits are sold and reproduced in the mainstream media as the normative "unraced" ideal that underlies "our" sense of national identity. Disproportionate coverage of whites in a society that pimps a colorblind, democratic ideal on the global stage not only naturalizes the invisibility of people of color, but implies that white suburban lives are the ones that are ultimately most worth caring about. This explains why only a third of whites believed that George Zimmerman’s murder of Trayvon Martin was unjust.

The role that femininity plays in the portrayal of these two Americas is critical. It's no surprise that white female victimhood is all the rage in the 24-7 news media for images of imperiled white femininity have historically been the currency of cultural narratives of ethnic and racial hysteria, manifest destiny, and national identity. One of the most influential early examples of media and cinematic propaganda to exploit this theme was D.W. Griffith's 1915 film Birth of a Nation. The moral compass of Griffith's film was the threat that the rape of white women by black men posed to the racial purity, national stability, and socioeconomic development of post- Civil War America. Rape and miscegenation were portrayed as the endgame of Reconstruction, a mortal threat to white control of the Union and justification for the lynching of black men. While the savage racial terrorism of Birth is considered "primitive" to twenty first mainstream America, it provided a media template for the association of white femininity with purity, innocence, and victimhood.

The underside of the idealization of white femininity is the projection of immoral hypersexuality onto black women in particular and women of color in general. Stereotypes of sexually loose, "ghetto" black women, hot-blooded Latinas, and Lotus Blossom Asian fetish objects cast women of color as the antithesis of normative white femininity. It is little wonder then that female victims of color never score on the national radar. Stories on missing women such as LaToyia Figueroa, Ardena Carter, Mitrice Richardson and Myra Howard don't generate tabloid heat because there is no corresponding association of feminine innocence or normative cultural values with the lives of urban black or Latino women. Narratives of the imperiled white female highlight the suburban virtues of white Middle America and not so subtlely evoke the social pathologies of the so-called inner city. Indeed, the increasingly intimate spectacles of grief, mourning, and community outrage that we see on CNN and FOX not only program viewers to identify with the injustice that has been done to the victim and her family, but to her community. In the world of 24-7 tabloid media these victims become our girls, our daughters; and if this horror could happen in these ostensibly crime-free normal white suburban communities it could very well happen to us.

Yet the white "us" will never make a connection between the massive expenditure of media time and resources on the investigation of say, the sham 2005 abduction of disgraced "runaway bride" Jennifer Wilbanks (who was savvy enough to finger a Latino man as one of her alleged abductors), and the fact that fifty years after The March on Washington and forty years after the passage (and now gutting) of the Voting Rights Act America is even more segregated, polarized and steeped in a culture of white entitlement that calls itself colorblind.

For more information on the organized movement to promote the stories of missing children of color contact the Black and Missing Foundation or the Missing Children of Color Foundation.