Pushing Back on “God” in Charleston 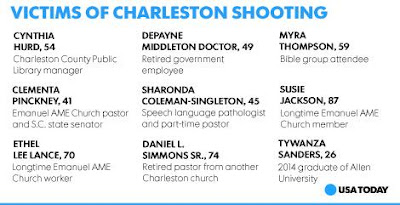 
In the midst of the prayers, vigils and misguided national calls for forgiveness, theodicy’s question of the ages resounds—if God(s) exists why does he/she/it permit unspeakable evil like the white terrorist massacre at Emanuel AME church?  Atheists point to Epicurus’ paradox about the impotence of “God” in the face of evil, arguing that last week’s murders tragically affirm his centuries-old caveat to the faithful.
While black folk are the most religiously devout group in the nation, “God”, it seems, has never had to answer, nor be called to account nor be indicted for black suffering.
So as a black humanist atheist I often get asked by white atheists playing ethnographer, “why are black people so religious? Don’t they know Christianity was used to justify slavery?” It’s been reported that the murderer deliberately targeted Emanuel because of its rich history of resistance to white supremacy.  As a terrorist assault on an activist black institution in the heart of the Confederacy, the massacre was not just an individual act but a manifestation of state violence. Founded in 1816 by black parishioners who broke from the racist white Methodist Episcopal Church, Emanuel was a platform for the revolutionary leadership of founder Denmark Vesey, who was executed in 1822 for plotting a massive slave uprising.  It was a church that was prohibited, reviled and burned to the ground because black people were not supposed to have spaces to congregate and organize in.


Radical black humanists, most notably Frederick Douglass and A. Philip Randolph, have challenged black religiosity under slavery while acknowledging the crucial role activist churches played in black self-determination.  Randolph’s critique of organized religion and the god concept was always coupled with a critique of capital and the imperialist occupation of black bodies and African countries.  Churches dominated black communities because of the nexus of racial apartheid and capitalism. Yet, ignorant of the socioeconomic and secular roots of slavery, and how they inform the privileges whites enjoy today, some white atheists marinate in smugness about the glories of Western rationalist traditions.  Black folk, it’s implied, should consider themselves lucky to have benefited from the vaunted secular freedoms offered by the U.S., the world’s most prolific jailer of black people.
Nearly two centuries after the foiled Vesey revolt, African Americans remain at the bottom of a capitalist plutocracy built on our slave labor.  Due to economic apartheid, wealth inequality and residential segregation, activist black churches are still pivotal in many communities.  Yet, as an atheist I can value their role while believing that it was not—as Christians rationalize—the Charleston victims’ “time”, nor a perverse example of “God’s will” that they were slaughtered.  I can value the profound fellowship that the Emanuel family displayed in welcoming the murderer into their bible study yet believe that a just god would not have allowed this parasite in their church home to begin with.
No loving god would allow a twenty six year-old in the prime of his life to be mowed down in cold blood, nor abide by a five year-old having to play dead to avoid being murdered.  No moral god would demand forgiveness for a crime for which there has never—since the first African was stolen, chained, exploited and “imported”—been any reparations.
Where, then, was “god” in that church? In the human agency, deeds and consciences of the victims, standing on the human shoulders of all the ancestor slave revolutionaries, known and unknown, who defied the lyncher regime of the U.S. government, a secular Constitution that branded Africans as 3/5s of a person and a “just” God who remains at large; un-indicted. 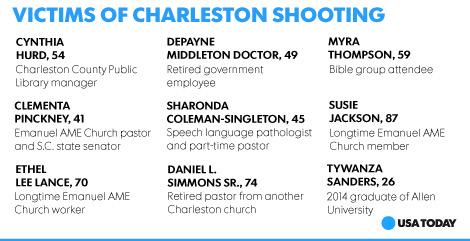 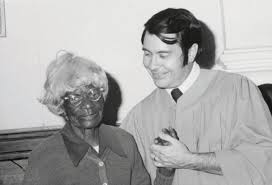 He was a charismatic white preacher-activist who could riff on the racism of the Bible one moment and the virtues of radical black liberation struggle the next.  Elderly black women were his most cherished audience, and he counted Huey Newton, Angela Davis, activist publisher Carlton Goodlett and prominent black politicians Willie Brown and Mervyn Dymally among his supporters. It’s been said that when the Reverend Jim Jones took his parishioners’ hands and looked deep into their eyes it was like they were the only ones in the universe.

Although many commentators have drawn parallels between former Spokane NAACP head Rachel Dolezal’s passing-in-reverse minstrelsy and white pop culture icons, the historical example of Jim Jones and his Peoples Temple church is more germane. In the packed annals of “White Negro-hood” Jones’ appropriation and manipulation of blackness represents an especially insidious brand of political minstrelsy.  For both Jones and Dolezal, racial stagecraft earned them real dividends in terms of income, credibility and access to policy makers, politicos and the activist black community.

Years before he relocated the Peoples Temple congregation from San Francisco to the eponymously named Jonestown settlement in Guyana Jim Jones was an undisputed rock star—a black-identified white man and respected public official who was also a closeted bisexual.  Peoples Temple championed the Black Panthers, the American Indian Movement, affirmative action, anti-police brutality initiatives, affordable housing and LGBT equality (most notably vis-à-vis the infamous 1978 Briggs initiative, an unsuccessful law that would have prohibited gays and lesbians from teaching in public schools).  Back then there wasn’t a radical-progressive issue the church didn’t espouse or go to the barricades for, regularly pushing back against the city’s segregationist power elite in rallies, editorials and political campaigns.

In his very public private life, Jones’ performance as revolutionary Elmer Gantry in blackface was unequaled.  He adopted a black son in 1959 and named him Jim Jr., paraded around his “rainbow” family of orphaned children and held court in the city’s multiracial Fillmore District as a white “black” man who proudly referred to himself as a “nigger”.  Throughout the Peoples Temple movement, Jones, like Dolezal, claimed to have received death threats and been the victim of racial harassment.

Indeed, racial persecution was one of the ostensible reasons for the church’s relocation to Guyana, dubbed the “Promised Land”.   Jones incited fear of an impending race war in the U.S. (in which black people would be sent to concentration camps) to justify emigration and keep members from leaving the jungle settlement.  Rallying Temple members on the notorious Jonestown “death tape” of November 18, 1978, he beseeched “Are we black proud and socialist?” The question was couched in an overripe narrative of white betrayal in which Jones blamed white conspirators for bringing down Jonestown.

So while Jones didn’t technically “pass” as black like Dolezal, his fierce identification with the lives and struggles of his parishioners was definitive.  In their view, Jones’ version of blackness was no facile lifestyle choice, fetish or “missionary” calling but a full-bodied identity that spoke to their legacy of resistance.  It was this belief that ultimately blinded some to the church’s moral corruption, setting the stage for their complicity with Jones’ authoritarian control.

When Jones and his Temple faithful ordered members to drink the toxic mix of flavor aid and cyanide that would kill over 900 people in the settlement, he was in full flaming White Negro-hood. Death, it was believed, would be the community’s final “revolutionary” resistance to the evils of racial apartheid.  Jonestown and Peoples Temple’s tragic end are a cautionary tale of the price the African American community has paid for political minstrelsy and reverse passing.
Posted by Sikivu at 10:09 PM

Police Criminals and the Brutalization of Black Girls 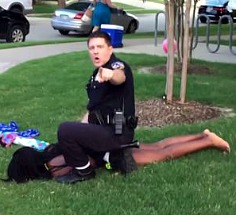 In Alice Walker’s short story “The Flowers” a little girl happens upon the decomposing body of a lynching victim while she is out picking flowers.  Walker contrasts the light tranquility of the girl’s walk with the savagery of her discovery; suggesting that to be a black child is to never be shielded from the “adult” horrors of racist dehumanization. As the girl lays down her wreath of flowers Walker’s narrator declares that “the summer was over”.   Summer’s metaphoric end signifies the brutality of a segregated nation in which black children are already othered, racialized, and criminalized in the pools, parks and recreational spaces that define white childhood innocence.

The videotaped assault and sexual harassment of 15 year-old Dajerria Becton by a rampaging white police officer after a pool party in McKinney, Texas makes it clear that it continues to be open season on black women and girls.  In the video officer Eric Casebolt grabs, straddles and violently restrains the young woman while she is lying face down on the ground in a bikini.  Ignoring her cries of pain and anxiety, he sadistically sits on her back while handcuffing her.  Casebolt then pulls a gun on a few young people who attempt to intervene.  Some of the good white citizens of McKinney have reportedly praised Casebolt’s thuggery.

The assault of Becton is an enraging reminder of the particular brand of sexual terrorism black women routinely experienced in the Jim Crow South at the hands of white law enforcement and ordinary white citizens.  In her important book, At the Dark End of the Street, Danielle McGuire chronicles how institutionalized sexual violence informed black women’s civil and human rights resistance.  Even as they were eclipsed in the mainstream civil rights movement by charismatic black male leaders, black women activists like Ida B. Wells, Recy Taylor, Claudette Colvin and Endesha Mae Holland drew on their experiences with sexual terrorism to galvanize black women organizers around the nexus of gender, race and class apartheid.

The McKinney incident underscores how even within the context of “recreation”, “normative” gender boundaries that automatically “feminize” young white women do not exist for young black women.  Little black girls can never occupy the space of carefree, feminine innocence that little white girls expect as their birthright.  They can never rely on the damsel in distress image to “rescue” them from American-as-apple pie state violence.  According to the African American Policy Forum, black girls are suspended six times more than white girls and routinely vilified as aggressive menaces in school classrooms. It goes without saying that a black male police officer captured on video brutalizing and sitting on a bikini-clad teenage white girl would have been lynched before he returned to his precinct. It is tacitly understood that the scantily clad bodies of teenage white girls are sacrosanct cultural commodities; publicly off limits to law enforcement, privately available for the consumption of white heterosexist patriarchy.  Within the public domain these are the bodies that must be protected at all costs—from potential violation by predator white men and from the imagined, ever present “threat” of violent encroachment by men of color.

Socialized to see black women as chattel, thuggish police officers play on misogynist white supremacist stereotypes to justify their criminality under the color of law.  After months of community agitation, last summer’s heinous videotaped beating of Marlene Pinnock, a middle age African American homeless woman, by a white California Highway Patrol officer led to his firing.  Nonetheless L.A.’s black female district attorney has not seen fit to file criminal charges against him.  And the recent conviction of white female LAPD officer Mary O’Callaghan for assault—rather than involuntary manslaughter—in the death of 35 year-old Alesia Thomas is an anemic substitute for justice.

The McKinney police thug has been suspended from duty but there should be a national push for prosecution.  As with police beatings and murders of men of color, there is no special dispensation for black women victims of state violence, no “weaker sex” clause that mitigates the brutalization of black women’s bodies as hypersexualized policed space.  For black girls in the hallowed idyllic spaces that enshrine the privileges of white youth, summer is always over.
Posted by Sikivu at 1:06 AM