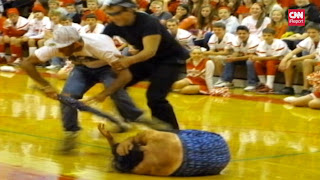 
In the 1990s, The O.J. Simpson murder trial polarized America and highlighted domestic violence as a national cause célèbre.  At the center of the storm was Simpson’s wife, the blond Orange County-bred Nicole Brown Simpson, who’d suffered years of domestic abuse by an NFL legend deified as a pop culture god.  After O.J. Simpson was acquitted of murdering Brown Simpson white America wanted his scalp. Nicole was the perfect victim, the beautiful tragic heroine who died too young at the hands of a savage.  The trial of the century hinged on redeeming a white woman’s honor and bringing her Negro killer to justice.  Brown Simpson was grieved globally, transformed into a symbol of the deadliness of intimate partner violence and martyr of a legal system—signified by the “dumb” "biased" black female jury that acquitted Simpson—run amok.
The underside of the verdict and the relentless valorization of Nicole Brown Simpson was the disreputable black female abuse victim.  Each year thousands of black women are shot, stabbed, stalked, and brutalized in crimes that never make it on the national radar.  Black women experience intimate partner violence at a rate of 35% higher than do white women.  Intimate partner violence is a leading cause of death for black women, yet they are seldom viewed as proper victims and are rarely cast as total innocents.  This is the backdrop to the tale of a group of white high school students in New York who thought it would be cool to don blackface and reenact the 2009 beating of pop star Rihanna by Chris Brown at a pep rally.  Like the gleefully bloodthirsty white audiences that gathered to view 20th century lynchings, there has always been a robust market for white consumption of black pain.  A big part of the white audience’s glee came from not seeing Rihanna as a proper victim.  For white Middle America, intimate partner violence is only funny as spectator sport if the person being beat is viewed as other.  From the right wing’s Moynihan-esque propaganda on black welfare queen matriarchs to recent abortion-as-black-genocide messaging, black women’s bodies are fair game for institutionalized acts of violence, terrorism, and control.  So for a lily white school to find the brutal beating of a black woman hilarious is par for the course in a misogynist white supremacist culture that deems black women less than human.
There is a deep connection between the current backlash against human rights for women and the white kids’ pep rally.  During the recent presidential debate, gender justice issues were reduced to hollow rhetoric about equal pay.  Mitt Romney prattled on about having “binders full of women” while President Obama tried to link the provisions of the Affordable Care Act with improving employment opportunities and equal pay for working women.  Although Obama rattled off a few vital health and family planning services provided by Planned Parenthood, the GOP assault on abortion rights went unmentioned.  Violence against women comes in many forms, and by ramming through law after law of draconian anti-abortion, fetal homicide, and “personhood” policies through state legislatures nationwide the GOP has become the foremost lynch mob of civil rights.  As the poorest, least compensated women in the workforce, women of color suffer disproportionately from the dismantling of reproductive health care.  But they are also brutalized by both parties’ promotion of corporate handouts, tax cuts for the wealthy, and denigration of social welfare programs that specifically target poor and low income families.


Yet, violence against women of color is so far outside of the radar of social justice organizations, much less the context of mainstream politics, that it even elicits little outrage amongst many young women of color.  Over the past few years, whenever I have classroom discussions about the Chris Brown/Rihanna incident students roll their eyes and snort in exasperation.  Some girls dismiss the issue as an endless rehash.  More insidiously, others express the view that Rihanna was somehow complicit in her own beating.  She must have done something, she must have hit him first, she must have provoked it in some way with her mouth, attitude, body—is the typical blame-the-victim refrain.


Not seeing themselves portrayed as worthy of human dignity, respect, and value has inured them to the unrelenting violence of explicitly anti-black anti-female media images.  According to a Pitzer College study, girls who are consistently exposed to “sexist violent rap videos were more accepting of teen dating violence.”  Training young women of color to come to voice, to identify the normalized violence that they experience on a daily basis, is one of the biggest challenges of feminist of color organizing.  Critiquing the pep rally incident, my Women’s Leadership Project students all agreed that the brutal beating of a Taylor Swift, a Britney Spears or even a Nicole Brown Simpson wouldn’t fly as spectator sport at a black high school.  The tragedy is that they all believed that Chris Brown’s beating of Rihanna would.
Posted by Sikivu at 10:11 AM