This Week in White Atheism 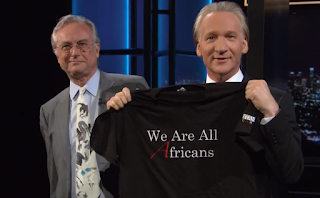 When white atheist Islamophobe poster child Bill Maher referred to himself as a “house n—ger” in an interview with Senator Ben Sasse, he was not only demeaning black bodies but doing a familiar minstrel dance—appropriating a term with deep cultural and historical symbolism in black speech.  Maher has prided himself on the kind of f-you outlaw irreverence and “establishment-bashing” that only a cis-het white male with the reward of a multi-million dollar HBO contract can enjoy without censure.  Supposedly docile and less black, “HN’s” have been characterized as complicit with white massa; a distortion that erases the painful history of black female domestic slaves who were often subject to rape and other forms of ritualized violence in the so-called plantation Big House.

Maher’s vitriol is not new to atheists and humanists of color who have long pushed back against the unapologetic Islamophobia, Eurocentrism and misogyny of Maher and fellow alpha males Richard Dawkins, Sam Harris, and the late Christopher Hitchens.  His identity as an atheist is relevant to this latest flap because he’s long been a golden boy of the white New Atheist clique; slobbered over for the dudebro swagger with which he’s skewered right wing and liberal sacred cows.  This kind of stagecraft pimping black experience has become a hallmark of the dudebro white atheists.  In 2013, white atheist You-Tuber “Dusty” chastised black Christians on being House Negroes and Uncle Toms because of their religious indoctrination and was called out by black atheists like myself and Foxy Jazzabelle.  Prior to that, American Atheists trotted out the black enslaved body in a 2012 street billboard campaign to boost its activist “cred” with a lily white donor base that didn’t give a damn about segregated African American communities.

Some are starting to learn.  I recently received an “outlier” email from a white donor to the Black Skeptics Los Angeles First in the Family scholarship fund who acknowledged that his primary “mission” should be to let humanists and non-believers of color lead without white intervention.  This was the recurring theme during a May forum featuring black, feminist, trans and indigenous activists across the religious spectrum at the Humanist Institute in Minneapolis.  Ashton Woods, Diane Burkholder, Andrea Jenkins, Desiree Kane and Sincere Kirabo spoke out powerfully on the right to self-determination of people of color in radical, progressive and intersectional movement organizing, and the necessity of getting white folk hell bent on being “allies” to sit down, shut up and retreat.

This issue of white incursions into intentional, as well as institutionally segregated, spaces of color is magnified by the seismic shift occurring in urban communities of color pushed to the brink by gentrification.  As black and brown neighborhoods are increasingly under siege from white homebuyers, developers and speculators, communities of color are in even greater peril.  Housing and rental affordability has plummeted, and the unemployment rate for African American youth has continued to skyrocket (with the unemployment rate for black male youth ages 16-24 hovering around 20% as of July 2016, in comparison to approximately 9% for young white males).  The malign neglect of neoliberal democratic policies is symbolized by the Obama administration’s piecemeal attention to black youth employment under the anemically funded My Brothers’ Keeper Initiative, which shut out African American girls—based on the erroneous premise that their status was better than that of black boys.  Since his election, Trump’s Orwellian misinformation about 59% black unemployment has only fueled the familiar narrative of pathological inner cities overrun with lazy, shiftless violent black men.

Taken in this context, Maher’s minstrel-esque appropriation of the term “House N” is even more infuriating as it implies insider-outsider status within a power structure based on white supremacy.  Outsider or outlaw status has been a card frequently played by white atheists fronting as though their non-believer status makes them an oppressed class bereft of race and class privilege.  Now, as they bemoan the Trump administration’s latest assaults on secular rights and women’s rights, more of them—as Diane and Desiree noted to the Humanist Institute’s mostly white audience—have become freshly galvanized as “freedom fighters” and allies when the liberation struggle of people of color was never on the menu before.  Maher’s use of the black body to front is yet another reminder of why atheist identity politics will always be a sham.