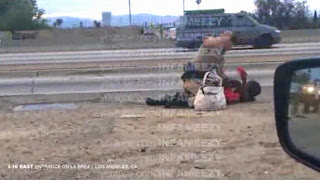 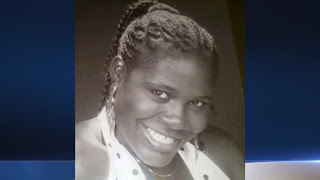 When a white California Highway Patrol (CHP) officer used 51 year-old Marlene Pinnock’s body as a human punching bag he was continuing a bloody tradition of uniformed thugs who’ve assaulted black women with impunity. The unidentified officer’s attack on Pinnock (who is reputedly mentally ill and homeless) was captured in a horrific video by motorist David Diaz. Pinnock was lucky to have escaped with her life. In 1999, a fiftysomething African American homeless woman named Margaret Mitchell was killed by an LAPD officer after an alleged street altercation over a shopping cart. Mitchell’s murder spotlighted the inhumane treatment of homeless people of color. African Americans are half of the county’s homeless population yet the complex mental health and socioeconomic issues that they face make them more vulnerable to long term homelessness than white transients. Mentally ill homeless African Americans are more likely to be criminalized for their condition. They are less likely to receive treatment, therapy or medication for their illnesses and are often misdiagnosed. Nationwide, African Americans are also more likely to be diagnosed with schizophrenia than are whites. But time and again when mentally ill black people “act out” or “meltdown” in public their symptoms are reductively perceived by law enforcement as dangerous, threatening and criminal.

At a recent community meeting that I attended with CHP commissioner Joseph Farrow, my father Earl Ofari Hutchinson of the L.A. Urban Policy Roundtable, Lita Herron of the Youth Advocacy Network, and Paulette Simpson of the Compton NAACP--as well as activists from the SCLC and the National Action Network--expressed their outrage over Pinnock’s brutal beating while contextualizing L.A.’s long history of officer-involved murder and abuse in communities of color. In contrast with the LAPD and the L.A. Sheriff’s department, Hutchinson and Herron noted that the CHP has had relatively few incidents of racial misconduct. Yet with a 69% white and an approximately 7% female officer population it’s clear that the CHP has serious “diversity” problems. For many people of color, the overwhelmingly white culture of the agency (according to CHP stats there are only three female chiefs of color in the agency and African Americans comprise 3.5% of all its employees) means that Pinnock wouldn’t have gotten a beatdown if she’d been a white middle-aged woman with mental health issues. Black women, be they mentally ill, elderly, disabled or otherwise, are never proper victims; while white women, the Western ideal of beauty, innocence and femininity, are always perceived as such.

This is starkly borne out in the criminal justice system. Nationwide, black women are overrepresented in the prison population, often receive harsher sentences if they are darker skinned and have the highest rates of suspension and expulsion in K-12 schools. There is no question that a video with an older defenseless white woman lying prone on the ground being knocked senseless by an officer of color (or a white cop for that matter) would’ve had the entire nation up in arms demanding the officer’s immediate termination and prosecution. Although the agency pledged to do a thorough and swift investigation, activists have called for a probe by the Department of Justice and the appointment of a special prosecutor—all recommendations that Farrow claims to be comfortable with.

When questioned about whether the agency’s training procedures were “culturally competent”, Farrow showed a three minute video clip showcasing stats which underscore the gravity of the state’s mental health crisis. Mentally ill folk are more likely to die at the hands of law enforcement. Over 1/3 of the homeless suffer from mental illness, and, shamefully, the L.A. County jail system is the region’s largest “mental health” facility. It is no coincidence that a significant number of those housed in county jails are African Americans afflicted with some form of post-traumatic stress and/or mental illness.
After the beating Pinnock was arrested, put on a 72-hour hold and is currently at the hospital. Despite the CHP’s claim that she did not suffer any injuries from the assault, her family says that she is recovering from severe injuries. The officer is currently on paid desk duty. And as the history of excessive force investigations have shown, law enforcement thugs and criminals have a snowball’s chance in hell of getting prosecuted much less convicted.

The public can keep the pressure on the CHP for full transparency in its investigation by pushing for the creation of a citizen’s advisory panel. It can also join the call for a federal probe of the beating and the appointment of a special prosecutor. Finally, it can push the CHP to make good on Farrow’s claim that the agency wants help recruiting and retaining a diverse workforce comprised of more people of color, white women, disabled and LGBT folk. 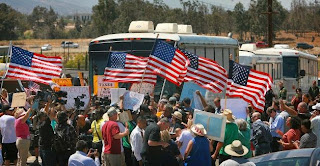 The influx of Central American families and unaccompanied minors at the U.S. border has escalated into a human rights crisis which some have exploited to make xenophobic, racist and nativist attacks against undocumented immigrants and refugees. Over the past few months, thousands of underage youth fleeing violence and instability in their native countries have been warehoused in substandard Homeland Security facilities. According to the ACLU some have suffered abuse at the hands of border officials. This week, angry protestors stormed and turned away buses full of predominantly women and children detainees in Murrieta, California. These attacks will only increase, as they are part of a national climate of hatred, hostility and discrimination against undocumented individuals and their families (which are often of mixed citizenship status) and communities. These attacks have been encouraged by the Republican-controlled House’s refusal to pass a comprehensive humane immigration bill that is informed by the progressive legacy of civil and human rights resistance forged by disenfranchised communities in this country.

As humanists and atheists of conscience, we find this climate of demonization morally and politically reprehensible. We categorically condemn the anti “illegal” immigrant and anti-human rights vitriol promoted by Republicans like California Congressman Darrell Issa who has called for the Obama administration to rescind its Deferred Action for Childhood Arrivals (DACA) policy. We fundamentally oppose the Obama administration’s escalation of deportation on the grounds that it is inhumane, breaks up families, and exposes both undocumented and citizen youth to sexual exploitation, foster care placement, homelessness and incarceration... 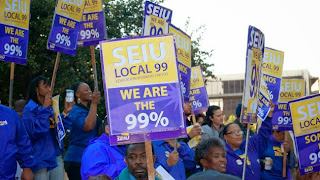 The myth of American exceptionalism has always been impervious to data and empirical evidence. Despite being the richest most prolific jailer in the world, the U.S. is fond of swaggeringly comparing itself to Western Europe with its evil big government social welfare safety net and waning capitalist moxie. Despite allowing Christian fascists to control its public policy it is fond of denigrating Muslim theocracy while touting its status as a beacon of secular democratic rights. Despite telling American women that they are liberated, post-feminist and beyond all that affirmative action shit, it is beholden to a medievalist court blazing a “new” trail of misogynist jurisprudence.

The Supreme Court’s Hobby Lobby decision is staggering in its criminal disregard for individual liberty, women’s self-determination and economic justice. It is indicative of how much the political ground has shifted in eight years that the seemingly modest requirement that all employers be mandated to provide birth control coverage under the Affordable Care Act (ACA) has emerged as a pitchfork clarion call for the radical right. As commentator Sally Kohn pointed out recently on CNN, the cost of birth control meds like Plan B is prohibitive for women who are making at or below minimum wage (HL apparently funded Plan B and other contraceptives it disingenuously labels “abortifacients” before the passage of the ACA). The absence of this coverage will have an immediate impact on their families and day-to-day livelihoods. But this endorsement of Christian fascists cannot be separated from the broader context of GOP assaults on worker rights and racial justice. In addition to subverting reproductive rights, the GOP has consistently opposed raising the federal minimum wage and fought tooth and nail against minimum wage increases in state legislatures like California. SCOTUS’ ruling against a requirement that home care workers in Illinois pay union dues was another salvo in the radical right’s campaign against public employee unions like SEIU. SEIU’s membership is fifty six percent female and forty percent of color. Nationwide, working class and low income women of color disproportionately rely on public employee unions to fight for benefits and higher wages.

These assaults have particular relevance for black women because women of color have seen their wages plummet, benefits disappear and job prospects shrivel. While there has been much focus on skyrocketing unemployment among black men, black women’s unemployment has increased significantly. As Jenn Jackson writes in Ebony, according to the National Women’s Law Center (NWLC) “black women only made up 12.5 percent of all female workers in June of 2009, yet accounted for over 42 percent of job losses for all women between June 2009 and June 2011. Black women’s unemployment rate increased 2.1 percent in the same period—three times the increase of the next highest unemployment rate (black men).” In 2013, “Black women were the only subgroup of women who did not see a decline in unemployment rates. As other racial, ethnic, and gender groups have seen improvements in their employment status, black women continue to lose jobs at disturbing rates.” Similarly, as the lowest paid group of women in the workforce Latinas also have the lowest rates of workforce participation. According to the U.S. Department of Labor Latinas make a lowly 61.2% to the dollar of white men while black women make 68.6%.

Just as recent Supreme Court decisions on corporate “personhood”, voting rights and affirmative action have further eroded the right to self-determination for poor and working class people, the Hobby Lobby decision is ultimately about power and authoritarian control over women’s lives, families, destinies and communities. And the only way to beat back the fascist anti-democratic tide is to organize.