Looting Public Education For the One Percent: Support the UTLA Resistance 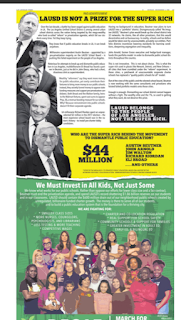 When the pro-charter LAUSD school board majority appointed investment banker Austin Beutner to superintendent earlier this year it effectively declared war on schools of color and communities of color.  Nationwide, public schools have been gutted by the rising tide of charterization, privatization, high stakes testing, union-busting, civil rights rollbacks engineered by the Trump/DeVos Department of Education. Teacher walkouts have reverberated across the country as states slash public education funding and schools re-segregate to pre-Brown v. Board levels.  The cynical appointment of the grossly underqualified Beutner (a one percenter white male with no prior public school teaching or administrative experience) signified that the board was essentially handing over the District to these forces on a silver platter in a swaggering f-you to parents, teachers, and students who’ve seen their schools reduced to detention centers.

When I attended Hamilton High School in the LAUSD in the eighties there were no school police, random searches or metal detectors.  College preparation was largely the domain of middle-class kids who could afford expensive Kaplan SAT test prep classes, and “guidance” counselors routinely advised students of color to go to vocational school or try their luck finding a low wage job “if” they graduated.  Flash forward and I’m the parent of a child who attends one of the last predominantly Black magnet elementary schools in a district that has morphed into a bloated police state bureaucracy.  With a dedicated police presence at virtually every campus of color, the district is a national leader in school paramilitarization. In this Orwellian LAUSD, lorded over by pro-charter privatizer shills and developers, students of color must navigate searches by deans, patrolling by police, and campus aides. Black, Latinx and Indigenous students in overpoliced schools struggle to gain access to college preparation opportunities and classes that reflect their social histories, while full-time college counselors, social workers, nurses and other resource providers are a luxury for affluent white schools.

In resistance to these blatant inequities, the UTLA is holding a massive demonstration downtown at Grand Park this Saturday at 10 a.m. The event is a clarion call to save public education from the privatization regime espoused by Beutner and his billionaire allies from the Broad and Walton Foundations.  The rally is expected to draw thousands and is being supported by ally unions like the SEIU.  On the brink of a potential strike in early January, UTLA has been locked in a battle with the district over teacher salaries, class sizes, and funding for counselors, librarians, nurses and community schools.  Although the district is reportedly sitting on a 1.86 billion dollar reserve, it is still playing hardball with the union, stalling on negotiations and ramping up rhetoric about teacher greed (the district is offering teachers a 6% salary increase, up from 3%, but has tied it to increased class sizes, reduced healthcare coverage for new employees, and mandatory professional development hours, conditions that would undermine instructional time, student success, and teacher morale).  According to UTLA: “The state requires only a 1% reserve, yet LAUSD has 26.5% in reserves. We have not been shown why it is so high, nor why district officials continue to ignore requests for financial information, the basis for why they say UTLA’s bargaining proposals are unreasonable.”  And as the district fiddles while schools of color burn, it has slashed funding for arts, music and STEM education, imposing testing that’s not even required by the state or federal government to the tune of $8.6 million a year.

In October, youth from the student-community activist organization Students Deserve confronted Beutner in a Westside mansion at a cozy invitation-only dinner on the “state of public education”.  Beutner was caught on camera scuttling away from the hard questions Dorsey High students Saisha Smith and Marshe Doss posed about the district’s refusal to end random searches.  Indeed, Beutner—who is the CEO of a district with over 15,000 homeless youth—has shown himself to be overly adept at doing overtime on district business at  expensive dinners, lunches and other toney retreats far removed from his constituents in the “ghetto”.

The school board’s reckless disregard for communities of color is especially destructive for queer and LGBTQI students who are being silenced and/or pushed out of schools in disproportionate numbers.  In a recent survey on LGBTQI climate issues that my students conducted at their South L.A. high school, the majority of students reported hearing homophobic remarks and could not identify administrators that were openly supportive of LGBTQI students on campus.  Similarly, the African American young women that I work with through the Women’s Leadership Project (WLP) say they don’t feel safe on their campuses and classrooms due to chronic sexual harassment.  Nonetheless, consistent programs that deal specifically with prevention education, mental health, and trauma for

girls of color are lacking in the district. These issues are at the heart of UTLA’s battle with the district.  While Beutner and his lapdog school board are hellbent on breaking up the district into 32 mini-districts (a tactic that is already represented by the moribund local district model) the parents, students and teachers who will be joining UTLA’s resistance recognize how high the stakes are and are prepared to go the distance.

Expressing her support for the march, WLP student Nigia Vannetty said, “As a student this march means a lot to me because of my experiences at Gardena High School. The ‘random’ searches conducted at my school are unfair and unjust. These random searches do more harm than good like disrupting class time and causing a huge scene for students. I have fallen victim to random searches and the feeling it gives you when you’re called is a mixture of fright and embarrassment. It’s even worse for girls who are on their time of the month and for their feminine products to be spewed all over the ground for the girl, boys, and staff to see. Overall, random searches are a humiliating experience that shouldn’t be implemented at schools at all. I hope that what I say makes a difference to students, teachers, staff, and administrators.” 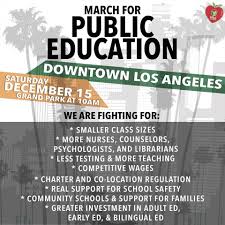