The Obamas' Race to the Bottom 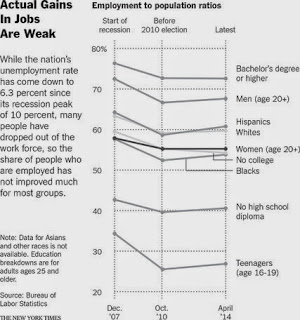 During her commencement speech at a Topeka Kansas high school commemorating the sixtieth anniversary of the 1954 Brown vs. Board ruling, Michelle Obama launched into a pointed critique of structural racism and injustice. Her comments were among the most frontal she’s ever made about the connection between racist stereotyping, public policy and systemic oppression. According to the First Lady, “Many young people in America are going to school largely with kids who look just like them…Too often, those schools aren’t equal; especially ones attended by students of color, which too often lag behind, with crumbling classrooms and less experienced teachers.”

Some cheered her stance as a welcome acknowledgment of racial politics in a terminally gutless administration. Yet the loving pass many in black America continue to give the Obamas—especially Michelle, one of the most powerful black women on the planet—on the race/gender disparities of economic apartheid smacks of complicity.
Hand-wringing from her ivory tower, Obama’s lament about the tattered legacy of Brown would have been comical if it weren’t so bitterly ironic. Over the past several years, the Obama administration has been a leading architect of the kind of pernicious re-segregation that Michelle Obama assailed in her speech. Ganging up with the neo-liberal free market evangelists of the Right, the administration has all but ravaged public education. Its 2009 Race to the Top policy opened the floodgates to privatization, dumbed-down curricula, and a permanent regime of high stakes testing which undermines teacher creativity and guts teachers’ unions. Nationwide, public schools are being systematically targeted by foundations, corporations, and hedge fund managers who’ve brokered multi-million dollar charter conversion deals with corrupt politicians in big city school districts like Newark, Los Angeles, New Orleans and Chicago. The neo-liberal magic bullet for “reforming” K-12 education is carving up schools for the highest corporate bidder. As a result special needs students, foster care students, English language learners, and other “problem child” demographics are shunted out of the schoolhouse and into the jailhouse.

After pursuing policies that have deepened racial segregation the Obamas’ eleventh hour “awakening” to racial inequality is yet another kick in the teeth to people of color staring at the brutal mirage of economic “recovery”. While income, wealth and employment outcomes for affluent white households continue to improve, African American employment rates have stagnated. A recent New York Times article zeroed in on the race and gender paradoxes of declines in unemployment. Increasingly, lower unemployment figures reflect the “disappearance” of workers who have simply dropped out of the labor force due to a lack of education, inadequate child care, and chronic frustration over diminishing job prospects. Moreover, because of the disproportionate impact of mass incarceration on communities of color, many African Americans and Latinos are virtually unemployable due to employer discrimination against ex-felons. Following the lead of Michele Alexander’s male-centric book The New Jim Crow, much of the mainstream literature on prison re-entry has focused on the dismal job prospects of male offenders. Yet black women are three times more likely to be tried, convicted and incarcerated for felony offenses than are white women. And because over fifty percent of black women are the primary earners in their households, employment discrimination against ex-felons should be a source of feminist human rights outrage.

But these are issues that President Obama and company appear to be nominally become aware of. Last ditch efforts like the administration’s My Brother’s Keeper initiative, which seek to pump millions of private dollars into youth leadership projects for black and Latino males, don’t address the structural issues highlighted in Michelle Obama’s earnest speech. As the Times reports “Income for households in the exact middle of the income distribution declined 4.26 percent from 2009 to 2012…For white households, mean income declined by 2.2 percent. For black homes, the decline was 4.5 percent; for Hispanics, 4.2 percent.” Job stats also showed that African Americans and those with no college education have comparable employment rates—further underscoring the toll the prison economy has had on African Americans of all class backgrounds. Despite the anti-feminist myth of black women’s economic ascendancy over black men, women in general and black women in particular have taken big hits. According to the Center for American Progress, “African American women only earned $610 per week, whereas African American men made $666 and white women’s median usual weekly earnings were $718 in the second quarter of 2013”. Further, black women are more likely to be earning the minimum wage than are white women and their employment rates have languished since the 2010 midterm elections.

Clinging to the bromides and symbolic allure of a Talented Tenth presidency has had devastating consequences for African Americans. As the gilded glow of the Obama era fades, black America approaches 2016 joined at the hip with a Party which banks on shoving yet another corporate imperialist dynasty down its throat.

Sikivu Hutchinson is the author of Godless Americana: Race and Religious Rebels and Moral Combat: Black Atheists, Gender Politics, and the Values Wars.

Bring Back Our Girls: May 5 Protests/Events

Bring Back Our Girls demonstration:
We ask you to join on on May 5th, 2014 at 6pm, on the corner of Crenshaw Blvd and King Blvd (by the Baldwin Hills Crenshaw Mall) to stand in solidarity. These girls are daughters, sisters, and friends and we need to show them that we care and will not turn a blind eye towards them.

Please wear the color red, and wear your gele if you have one.
Location: King Blvd & Crenshaw in South Los Angeles
Time: 6pm PST