DNA and the Banality of Evil 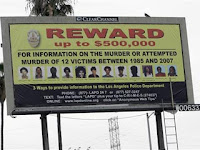 The intersection of Figueroa and Slauson in South Los Angeles is an unremarkable one, a mundane swath fronting a gas station, an old train right of way, and a Harbor freeway overpass. It is the site of a spate of serial murders committed during a ten year period by serial rapist and murderer Chester Dwayne Turner. Like the Grim Sleeper serial killer, Turner, aka the South Side Slayer, stalked South L.A. from 1987 to 1998 in pursuit of African American female victims. Turner’s background fit the banal profile of the misogynist sexual predator operating right under the nose of local law enforcement. He was a “cipher” who bounced in and out of menial jobs; unstable, irresponsible, abusive towards and financially dependent on the women in his life. While Turner was an obvious miscreant, Lonnie David Franklin, the recently arrested suspect in the Grim Sleeper murders, was a bit more complex. Neighbors have described him as a stable, congenial Mr. Fix-It type whose only known “quirks” were “issues” with women (including, apparently, showing off nude pictures he’d taken of and underwear he’d collected from various women) and a nebulous criminal record.

Franklin’s street was not far from my own, in a generally quiet well-kept area of single family homes that lazy mainstream media hacks are fond of dismissing as “gritty” and crime-ridden. Franklin’s arrest was made possible through the decades’ long struggle for visibility waged by the victims’ families and community activists like Margaret Prescod, who founded the Black Coalition Fighting Back Serial Murders in the 1980s. The LAPD’s identification of the serial murder pattern was first reported in a 2008 article by white LA.Weekly journalist Christine Pelisek, who dubbed the killer the “Grim Sleeper.” Shortly after Franklin’s arrest Pelisek stated that she had been deluged with film and TV queries about the case. Pelisek’s comments on the budding media interest are telling. As of this date, there have been no TV movies on the South Side slayer case nor, for that matter, any mainstream dramatic treatment on serial murders of black women. Given this disparity it is not difficult to see a big budget Nancy Grace-style treatment with Pelisek at the center. Because Franklin and Turner are black male killers of black women it is safe to say that there will be no cable-ready film made psychoanalyzing their childhoods, no Lifetime channel melodrama on the lives and last days of their victims trumpeted in flashy national billboard campaigns, and no pathos inspiring media blitz chronicling the anguish that these murders elicited in South L.A. communities.

Rather, what has captivated much of the mainstream media is not the hide-in-plain-sight atrocity of a prolific killer of black women puttering innocuously about his well-maintained single family home, but the 21st century “marvel” of familial DNA . Without the familial DNA piece it’s doubtful there would be any continuing national coverage of the story. Sensing a national angle and an easy way of redeeming its image as a print relic repository for the white Westside, the L.A. Times has outdone itself with daily coverage on the case’s DNA trail. Mainstream media fixation on the DNA evidence has eclipsed focus on the victims’ families as well as consideration of the case’s double-edged implications for communities of color in the U.S.

According to Brandeis law professor Jeffrey Rosen, “African-Americans represent about 13 percent of the United States population but 40 percent of the people convicted of felonies every year.” The wholesale over-incarceration of African American communities means that many African Americans are related to someone who has been convicted of a felony. Right wing pundits and champions of unregulated familial DNA use would argue that since blacks are committing a disproportionate number of felonies they have every right to be subjected to the heightened scrutiny of DNA profiling. Yet national data on sentencing indicates African Americans are over six times more likely to be convicted of and harshly sentenced for felonies than are whites who commit similar crimes. The proposed expansion of California’s DNA database to include the DNA of arrestees—the database is currently comprised of DNA from convicted felons—would further criminalize blacks and Latinos. Unchecked law enforcement use of familial DNA is almost certain to be a bellwether of civil liberties infringement for innocent people of color.

The initial marginalization of both the South Side Slayer and the Grim Sleeper cases were brutal testimony to the devalued lives of women of color in the mainstream media regime. With the arrest of Franklin, the grieving families of Janecia Peters, Valerie McCorvey, Princess Berthomieux, Alicia Anderson, Lachrica Jefferson, Mary Lowe, Bernita Sparks, Barbara Ware, Thomas Steele, Henrietta Wright and Debra Jackson might be able to achieve some degree of closure. In the ultimate yet uniquely American irony, science has fleetingly “humanized” the lives of victims deemed expendable by the media regime. Yet uncritical embrace of familial DNA will potentially reinforce the very disenfranchising conditions that allow a vicious predator like the Grim Sleeper to “sleep” for two decades.

Sikivu Hutchinson is the editor of blackfemlens.org.
Posted by Sikivu at 9:14 AM No comments: