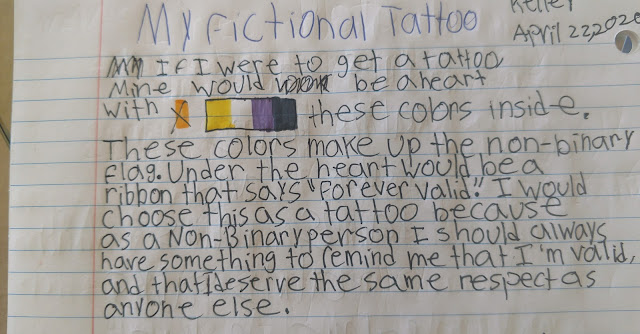 A parent repeated the right wing slur that greater media representation of LGBTQ lifestyles is “turning youth out” and encouraging them to become gay. A South L.A. school employee said she had a problem with the use of the Black Power fist by a Black and Latinx GSA Network campus group during last November’s global Transgender Day of Remembrance. A Black father told his eleven year-old daughter not to display her Pride flag because it will cause conflict within the family. And, at a March LGBTQIA+ Youth of Color Institute with South L.A. students at King-Drew Magnet High School of Medicine and Science, virtually every young person in attendance expressed anxiety about their family’s religious-based homophobia and non-acceptance.

These exchanges occurred before the pandemic shutdown, the lynchings of Ahmaud Arbery, Breonna Taylor and George Floyd, the Black Lives Matter uprisings, and the massive educational upheavals that have forever changed the lives of Black and youth of color. When I completed this article in March at the beginning of the pandemic, I had a hard time finding a publisher for it. Some of those rejections were no doubt due to the demand for COVID coverage. But most were undoubtedly due to the usual erasure of Black queer youth and family issues in the dominant culture when it isn’t Pride Month.

As the number of openly-identified Generation Z LGBTQIA+ youth increase, the exchanges that I reflected on above have become more commonplace in African American schools, homes, and families. According to the Centers for Disease Control (CDC) 2017 Youth Risk Behavior Survey, African American youth in L.A. are more likely to identify as lesbian, gay or bisexual than non-black youth. As a result, they comprise a significant portion of all youth who identify as LGBT in L.A. Nationwide, LGBT African Americans are more likely to be raising children than are white LGBT individuals. And over fifty percent of queer families are headed by Black women, bucking mainstream depictions that privilege white gay and lesbian parenthood.

Although intersectional approaches to mental health and wellness are widely touted in social justice circles, educational and family support platforms that specifically meet the needs of Black queer K-12 youth are few and far between. As the parent of a non-binary, queer child I am acutely aware of this vacuum. My child and their LGBT peers have experienced bullying and harassment at their LAUSD middle school. Despite the national prominence of the PFLAG LGBTQIA+ family advocacy organization, when I searched for a local African descent group with the same emphasis I couldn’t find one. Similarly, Ariel*, an African American friend and parent, said that she was “shocked to learn that there are very few spaces in North Carolina and throughout the nation where my Black transgender son and for other Black LGBTQIA+ youth can meet. Because I want my son and other Black youth to be safe and supported, I want to see gatherings forming around the nation for Black LGBTQIA+ youth and families. It is imperative that African American families support our LGBTQIA+ children.”

After meeting at a Pride event last summer, Cynthia Ruffin (director of community relations at Colors LGBTQ Youth Counseling services) and I started a Black LGBTQIA+ Family and Caregiver support group in South L.A. The group meets monthly at AIDS Project Los Angeles (APLA) in Baldwin Hills and is designed to provide safe space and advocacy resources for parents and caregivers of Black LGBTQIA+ youth, especially as they navigate K-12 school culture, mental health needs, and challenges with peers. As a new group, we have struggled to attract and retain more members. These struggles are not unique; the first local, South L.A. PFLAG group disbanded due to waning membership. Family groups that focus on queer youth of color can be difficult to sustain in the face of intersectional community challenges such as poverty, job commitments, lack of childcare, and fear about homophobic non-acceptance. At our monthly meetings, we discuss parenting and caregiving strategies, as well as how to deal with faculty, administrators and other school officials who range from hostile to ignorant of the culturally specific needs of African descent queer students. We also unpack the diverse coping mechanisms that our children use in their school lives and relationships. One of the most pervasive issues that members grapple with is the veneer of liberalism in predominantly white educational settings. White school officials may pay lip service to LGBTQIA+ inclusivity but fail to consider how the experiences of Black queer youth disrupt their colorblind ethos. In our first public event earlier this year, we showed up to support queer and trans youth at a Westboro Baptist Church hate protest in front of Manual Arts High School in South L.A. We are currently planning a PSA with members, tabling at future Pride events and parent trainings at local school districts.

According to the Human Rights Campaign’s 2017 “Black and African American LGBT Youth” report, seventy seven percent of African American youth have heard their family members say negative things about the LGBTQIA+ community. Only twenty six percent say their family members are involved in pro-LGBTQIA+ activities or resourcing. The gap in family and social safety net support for Black queer, trans, and nonbinary youth is a major factor in their high rates of sexual abuse, homelessness, depression, and suicide. Couple this with high levels of religiosity among African Americans, and many Black queer youth are forced to remain closeted in their communities for basic survival.

Still, queer Generation Z youth are at the forefront of movement change and resistance. And it is not a coincidence that the increase in LGBTQIA+ identification is also paralleled by increasing numbers of youth who are not religiously identified or affiliated. Greater numbers of Gen Z youth say that they’re dubious of religious dogma precisely because of the bigotry organized religions have historically displayed toward the LGBTQI community.

In predominantly Black and Latinx South L.A. schools, training and professional development on creating safe spaces for LGBTQIA+ youth are minimal. Often, these initiatives are taken up by the Genders and Sexualities Network or GSA Network, a nationwide support network for LGBTQIA+ students. According to a new study by the Gay/Lesbian Student Education Network and the National Black Justice League, Black students who were at a school with a GSA were more likely to stay in school and feel safe in school. At one school where I advise GSA youth, students reported that there were few identifiable adult allies on campus who were openly supportive of LGBTQIA+ students. At another school, youth reported that there were vocal adult allies but their peers used homophobic and transphobic slurs that went unchecked all the time. Indeed, at this very same school, conservative religious Black faculty had once taken down a LGBTQ affirming flag and replaced it with a Christian “flag”.

In January, our GSA students at Gardena High School presented the findings of a campus survey that they conducted on LGBTQI school climate issues. The presentation was part of year long peer education and outreach using the GLSEN’s school climate survey tool. Conquering performance anxiety, the youth stood bravely before eighty faculty, staff and administrators, educating the adults in the room about gender pronouns, LGBTQIA+ youth of color demographics, and queer inclusive California legislation like the 2011 Fair Education Act. Prior to the faculty training, my students presented to their peers on queer identities, representation of queer social history in text books, and the role adult allies played on campus. We met with the principal about our outreach plan, then connected with ally English, social studies and health teachers on campus in advance and provided them with prompts on pronouns, key terms, and definitions about gender and sexuality. Students established ground rules for maintaining respectful communication, equitable dialogue, and confidentiality. During one classroom presentation, a student leader named Taj* asked if there were any students who would feel comfortable coming out to their parents. “My mother’s Black”, a ninth grade student said flatly, implying that coming out would be a deal breaker in most African American families. Again, her sentiments were shared by other Black and Latinx youth who indicated that their family’s Christian religious beliefs were a barrier to acceptance and support.

While these youth consistently show up to demonstrate leadership, the missing link is visible family, networks that affirm and reinforce their activism. Acknowledging the cultural barriers that exist for Black family advocacy, Ariel argues, “There is no decree, doctrine, or belief that would prevent me from fully supporting my children. I follow my personal motto closely, to find spaces that reflect them, that bolster their growing selves. If I cannot find those spaces, I join with like-minded people to create them.” Similarly, Deidra Hardimon, the parent of a Black trans young man, noted that, “The group is important for me. I need support to continue to be there for him. It helps me to not feel alone or judged. So it frees me up to say exactly how I feel or to question. The triple burden of being Black, male and trans in the world is heavy. A heaviness I can’t ever fully understand. And I feel we are somewhat pioneers. We’re charting new territory for (families and our children).”

As calls to defund school police gain traction, investing in the mental health and wellness of Black queer youth must be a key policy demand. At the same time, African American parents and caregivers have a duty and an obligation to demonstrate that there are loving, proactive Black families who are ready, willing and able to go to bat for them. Doing so will save lives and advance justice for Black queer youth in our polarized schools and communities.

Sikivu Hutchinson is an educator, writer and founder of the Women’s Leadership Project Black feminist mentoring and civic engagement program for high school girls of color in South L.A. Her new book, Humanists in the Hood: Unapologetically Black, Feminist, and Heretical was published in April. The L.A. Black LGBTQIA+ Parent, Family and Caregiver group can be contacted here. Twitter @sikivuhutch