The Souls of Black Boys 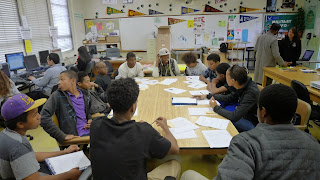 "No one ever discussed Trayvon Martin with us in class," said Sydney, an introspective 9th grader, wistfully. Sydney is a participant in my Young Male Scholars pilot at Gardena High School in South Los Angeles. He and a dozen other 9th and 10th graders are having a spirited discussion about the impact of Martin’s murder on the criminal justice system in Gardena’s college center. According to the school’s college counselor black boys are a “rarity” in the center and our small meeting is the largest number that he has ever seen here. On a campus where black students are the second largest ethnic group next to Latinos, black males are either pounced on by military recruiters or left to fend for themselves, implicitly branded as troublemakers and potential dropouts.

The college counselor’s observation was the impetus for my starting the pilot in collaboration with Brandon Bell, a young, South L.A. community activist alum of King Drew Medical Magnet and Princeton University. In an educational climate where there were only forty eight black male students in the freshman class of internationally prestigious UCLA, the pilot is specifically designed to pipeline black males into college through targeted intervention. But it is also geared toward politicizing young men of color by providing them with the historical consciousness and space to become an activist generation of organizers, scholars and intellectuals.

Our discussion about the political implications of Martin’s murder took place a day before the death of Nelson Mandela. As the world mourns Mandela and president Obama touts an eleventh hour focus on “income inequality” neo-apartheid conditions in American education continue to fester. Last week was bookended by two powerful education reports which indirectly indicted the myth of American exceptionalism. The 2012 Program for International Student Assessment (PISA) showed that American students remained static in reading and science and were well below average in math, falling from 29th to 31st in global rankings. The Campaign for College Opportunity’s "The State of Blacks in Higher Education: The Persistent Opportunity Gap" illustrates the devastating impact of California’s anti-affirmative action policy.

The Campaign for College Opportunity report concluded “that gaps between Blacks and other ethnic groups in college-going and attainment have remained virtually unchanged for more than a decade, and in some cases, have worsened.” Despite claims of increased college opportunities for millennials, “A smaller share of today’s California Black young adult population holds postsecondary degrees than that of Blacks between the ages of 35 and 64.” Put bluntly, in an era in which affirmative action has been viciously discredited and all but gutted by both the Right and neo-liberal “left”, young African Americans are less educated than older African Americans. African American students attend community and for-profit colleges in higher numbers than other groups and have the highest student loan debt and default rates. In addition, black youth still have the lowest graduation rates in California.

In the Los Angeles Unified School District (LAUSD), the class of 2017 (this year’s 9th graders) will be required to have college prep classes in order to graduate. They must earn a C or better to do so. They will have to achieve this feat despite the Obama administration’s Race to the Top emphasis on high stakes tests that narrow the curriculum, undermine critical thinking and force teachers to be glorified proctors. Nationwide, black students are the least prepared for college, have the lowest enrollment in honors and college prep classes and the highest drop-out or push-out rates. The LAUSD requirement is set against the backdrop of deepening unemployment, prison pipelining and black male homicide rates. According to the Education Trust, “If current trends continue only one in twenty African American students will go on to a four year college or university.” The forty eight black males in UCLA’s incoming class are swimming in a sea of over 5000 new students. Enraged by these stats, black male UCLA students recently released an activist video critique which went viral. But despite renewed attention to racial disparities in college access there is no federal, state or local policy or call to action that specifically addresses the fact that young African American male high school students are routinely dismissed as not being college material.

As the Martin case demonstrated yet again, the dominant culture does not associate young black men and boys with tenderness, caring, sensitivity, and compassion, much less intellectualism. Since white supremacist culture can never see black youth as victims they can only be predators and aggressors. The visceral fear that adults have of so-called black male criminality is one of the primary reasons why black boys are suspended and expelled at higher rates for lesser offenses than are white students.
Youth of color, like white kids, are trained to see explicit acts of individual prejudice as the only standard for racism rather than institutional racism and white supremacy. So when Brandon and I discussed how mass incarceration was devastating our school-communities some of the boys in the group said that “bad environments” and “bad choices” simply lead black youth to commit more crime. But after examining disproportionate crack cocaine use amongst white males and unpacking how legacy admissions policies allow mediocre white students like George W. Bush get into Ivy Leagues the students’ consciousness began to shift. Not seeing themselves in the curriculum, public education socializes them to believe that disproportionate numbers of their brothers and sisters are in prison due to bad choices while college is the reward for the elite few who make good ones. Teaching them to see the connection between the racial politics of college access and the invisibility of Martin’s murder in their high school curriculum is a step toward defying this criminal mis-education.

Sikivu Hutchinson is the founder of the Women's Leadership Project and the author of Godless Americana: Race and Religious Rebels and Moral Combat: Black Atheists, Gender Politics, and the Values Wars.