The Rainbow on the Highway and Preventing Suicide Among Black Girls 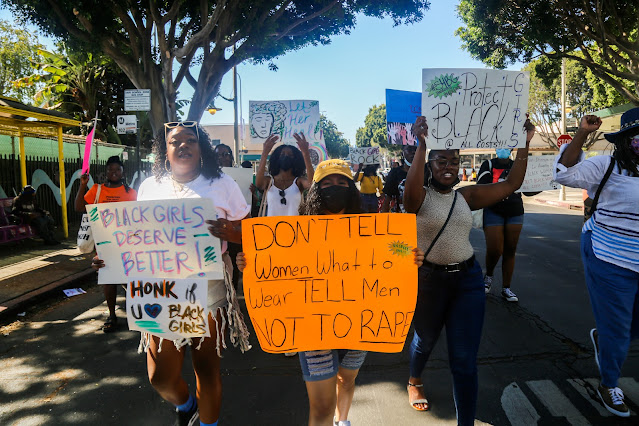 “I was driving the №1 Highway in northern California and I was overcome by the appearance of two parallel rainbows. I had a feeling of near-death or near catastrophe. Then I drove through the rainbow and I went away…I put that together to form the title.” Ntozake Shange.

Poet, playwright, and activist Ntozake Shange’s 1975 “choreopoem” play for colored girls who have considered suicide/when the rainbow is enuf was a landmark artistic acknowledgment of the mental health toll racism, sexism, and domestic violence take on the lives of Black women. Shange reportedly considered suicide four times before writing her seminal work. Her play was only the second Black woman’s production to be featured on Broadway (after Lorraine Hansberry’s 1959 smash A Raisin in the Sun). Decades later, Black female suicide is still a third rail taboo in Black communities.

As an atheist and abuse survivor who has struggled with depression and suicidal ideation, hearing the litany of things “Black people don’t” do sends my bullshit detector into overdrive. The truth is, moralizing about Black conformity hinders direct engagement with the mental health risks and challenges we face — especially when it comes to addressing the dramatic increase in suicide among Black girls. Aspiring psychologist and 19-year-old college student Ashantee Polk notes that, “Suicide is simply not talked about in our communities. So many Black women and girls of all ages are dealing with mental health issues. They’re overlooked because we are supposed to be ‘strong’ and we’re supposed to be able to endure what we go through.”

The prevailing stereotype is that Black girls are superwomen in training; strong, ultra-resilient, 24/7 caregivers to everyone, and responsible for lifting up others at all costs. Fist-pumping memes and affirmations that extol “Black Girl Magic” and “Black Women Saving the World” may actually obscure the gravity of Black female depression. And, despite increasing attention to Black women’s victimization, Black men and boys are frequently prioritized in national discourse around violence and self-harm. Picking up on these cues, Black girls often see that creative Black women, or Black women who don’t conform to gender norms and expectations, are marginalized, demonized, and ridiculed. The prevalence of these messages is precisely the reason why rising rates of Black female suicide remain under the radar.

According to Time magazine, “Suicide rates among white people in the U.S. declined from 2019 to 2020, contributing to a 3% overall drop in suicide deaths in that time period. But there were no statistically significant declines in suicide rates for Black Americans or other Americans of color; in fact, for some racial or ethnic groups, rates increased from 2019 to 2020. Among Black youth and young adults, in particular, suicide rates have climbed steadily over the past two decades.” From 2003–2019, suicide among Black girls increased by 59%. The biggest increase occurred among 12–14-year-old girls.

What is happening in this age group? Normalized sexual violence and sexual harassment play a big role. Racist/sexist social media targeting, as well as an overall lack of protection for Black girls experiencing gender violence in elementary and middle school, are also factors. From a very early age, Black girls are subjected to a steady drumbeat of anti-Black misogyny in mainstream media and music. Glued to phones and tablets, Black girls are oversaturated with toxic imagery that brands them as bitches, hos, and thots, along with a constantly evolving array of sexists, colorist, body shaming, and victim-blaming epithets. According to the Black Futures Lab 2019 census, African Americans overall are also more likely to identify as LGBTQ+ than non-Black folks (with a significant portion represented by Gen Z and Millennials), thus, constant exposure to homophobic and transphobic imagery and language are major stressors for Black youth.

In addition, the pandemic has been especially traumatic for Black girls who must shoulder the burdens of caregiving, schoolwork, jobs, and surviving rampant sexual and domestic abuse. Rising rates of gun homicide among Black girls and women attest to this toll. Although homicide rates rose by 30% nationwide, rates for Black women and girls increased by 33%. Writing on this issue in the Guardian, Lois Beckett and Abene Clayton note that these stats represent “a sharper increase than for every demographic except Black men, and more than double that of white women.” Living in communities where gun homicide, domestic abuse, and police violence are pervasive, there are often few outlets that provide safe spaces for Black girls.

High rates of suicide and homicide are symptoms of the same structural inequities and vulnerabilities. As Essence magazine notes, “According to the American Psychological Association, African American teenage girls surpass their White and Hispanic counterparts in suicide attempts…” Yet, some of the subject experts cited in Essence, Time, and other publications do not explicitly highlight how racialized gender disparities inform increasing suicide rates among Black girls (a 2021 Therapy for Black Girls podcast featuring Drs. Jeanette Wade and Michelle Vance is an important exception). Instead, they consistently identify racial injustice, trauma, and poverty as the most salient factors.

This is problematic. If evaluations of Black female trauma are not intersectional then prevention, intervention, treatment, and recovery become even more difficult. Culturally responsive resources and safe spaces that are specifically (and unapologetically) tailored to meet the needs of Black girls are critical. Queer safe spaces such as GSA clubs have been proven to provide youth with greater motivation to stay in school, graduate, and go on to college and careers. Similarly, gender and racial justice-oriented campus and community organizations that promote civic engagement, activism, mentoring, wellbeing, professional development, college readiness, and career paths can provide safe spaces to combat depression and isolation among Black girls in particular and Black youth in general.

In a statement decrying the rise in Black adolescent suicide, the American Academy of Child and Adolescent Psychiatry recommends “advocating for increased investments in programs that build a more culturally competent and minority-representative pediatric health care workforce”. Truth be told, the majority of Black youth receive mental health care at school from social workers and counselors when they receive it all. In many school districts, access to a psychiatric social worker is a crapshoot due to high student-to-practitioner ratios and policies that stigmatize Black youth as violent and criminal. This is why wellness initiatives that provide Black girls and Black gender expansive youth with therapy from culturally competent, BIPOC womanist, feminist, queer-affirming, and trauma-informed practitioners are an essential element of suicide prevention care. Informal friend, family, and mentor networks that “lead with love’, compassion, and joy” can provide Black girls across sexuality with opportunities to vent, reflect, and connect around shared life experiences are critically important.

Suicide and suicidal ideation among Black girls should be responded to holistically, utilizing a multi-pronged approach to wellness that ensures elementary, middle, and high school-aged Black girls don’t bear the brunt of normalized misogynoir and adultification. As 20-year-old Women’s Leadership Project peer educator and activist Jadyn Taylor argues, “We cannot handle everything the world throws at us, including prejudice, gender inequality, and stereotypes, with a smile on our faces and a pat on the back. We need mental health care and a system set in place for young Black girls struggling with depression. If we cannot speak about our mental health issues at home then where are we supposed to get help for free ourselves? Start paying attention to Black girls and listen when we speak because we may be begging for help without saying ‘Help’”.

Therapy for Black Girls provides national resources for therapy, counseling, and outreach in addition to a mental health blog and podcast

What’s Missing from the Conversation about Black Women and Suicide with Dr. Jeannette Wade and Dr. Michelle Vance, whose work centers on suicide research & intervention among Black women and girls.

How to Talk to a Child Who is Struggling