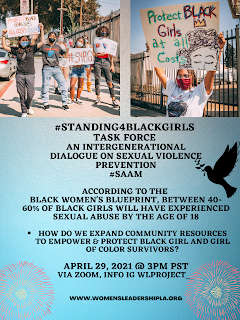 "For every Black woman who reports rape, at least 15 Black women do not report."

Every year, thousands of Black women are shot, stalked, brutalized, murdered, and sexually assaulted but this "pandemic within a pandemic" violence never makes it on the national radar. Black women experience intimate partner violence at a rate of 35% higher than do white women.

According to the Institute for Women's Policy Research, "Black women were two and a half times more likely to be murdered by men than their white counterparts. And, more than 9 in 10 black female victims knew their killers. Black women also experience significantly higher rates of psychological abuse — including humiliation, insults, name-calling and coercive control — than do women over all."

Moreover, according to a Black Women's Blueprint study, between 40-60% of African American girls will experience sexual abuse by the time they turn eighteen. Black girls are also less likely to report sexual abuse and rape than non-Black girls, while being systematically victim-shamed, blamed, criminalized, and gaslighted when they speak up about rape and sexual assault. According to a 2020 survey of over 150 South L.A. youth by WLP students, a majority of African American girl sexual violence and harassment survivors did not receive help, therapy or mental health intervention.

Article: "Why It's Harder for African American Women to Report Campus Sexual Assaults"