Shut up and Step Up: Right Whines It's 'Open Season' on White Men 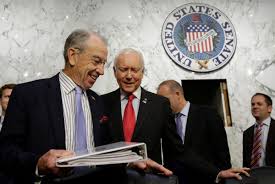 In a year that has seen the toppling of numerous “untouchable” male power brokers over sexual harassment and violence, Senator Mazie Hirono’s demand that men “Shut up and step up” concerning the sexual assault allegations against SCOTUS candidate Brett Kavanaugh is a call to action.  To all the “enlightened” males who publicly deplore violence against women, yet sit back and cosign sexist behavior and benefit from a culture of normalized sexual violence, it is a message that you are being watched and held accountable.  And to all the white women who have jumped on the character witness bandwagon to valorize Kavanaugh it should be a reminder that simply being assigned female at birth doesn’t exempt you from complicity with patriarchy and the silencing of sexual violence survivors.

While the death threats Kavanaugh accuser Christine Blasey Ford has received for speaking her truth are deeply reprehensible, they have been buttressed by female voices.  For the past twenty four hours, the major cable news networks have ramped up air time of pro-Kavanaugh ads produced by the conservative Judicial Crisis Network. The most prominent ad features respectable white women waxing about how upstanding and morally unimpeachable Kavanaugh is.  The not so subtle implication is that Kavanaugh can’t be a sexual predator, misogynist or threat to women’s equality if he’s been an “advocate” for women in his personal and professional relationships. He can’t have attempted a brutal sexual assault because he’s been an upstanding champion of female colleagues. Kavanaugh, like elite ivory tower brethren Brock Turner (the former Stanford University student whose lenient six-month prison sentence for sexual assault elicited a firestorm and led to the recall of Judge Aaron Persky), has an impeccable pedigree and should be forgiven youthful “peccadillos”.  For survivors, this paradox of exhibiting personal “integrity” while propping up racist, sexist, misogynist policies and practices is a familiar narrative.  Of course, central to victim shaming and blaming is the narrative that there are fundamentally good men who never cross the line but for the sluttish behavior of irresponsible women and girls. According to this view, predators are easy to spot, wear scarlet letters, and are always outwardly loathsome, reptilian individuals.  The only predators are serial predators and displays of decency, civility and good manners always attest to moral character.  And even respectable white women like Ford must comply with the code of silence protecting toxic masculinity.

The demonization of Ford by the right is yet another indication of how low the GOP fascists are willing to go to gut human and civil rights. According to ReproAction Network, Kavanaugh’s repugnant record on women’s rights puts him lockstep with Supreme Court Justice Clarence Thomas.  His now well-documented insidious appellate court decisions include voting against abortion access for an undocumented teenager and in favor of forced abortions for disabled women, as well as judgments  opposing affirmative action, workers’ rights, disability rights, and the Affordable Care Act.
According to conservative ideologue Ann Coulter, the fate of white men’s public integrity as a whole is at stake because of the “attack” on Kavanaugh.  In this Democratic-engineered, deep state witch hunt, it’s open season on white men and “any white male” can find himself roasting at the stake.  Coulter’s injection of white patriarchal anxiety into the controversy is fitting because it speaks to the way the mainstream hijacking of #MeToo both flouts and reinforces white supremacy—to how white nationhood, as represented by white male dominance and white female submission, must always be validated and protected at all costs. It’s no surprise that some of the most "compelling" spokespeople in this enterprise are the white women who handed Trump the presidency.