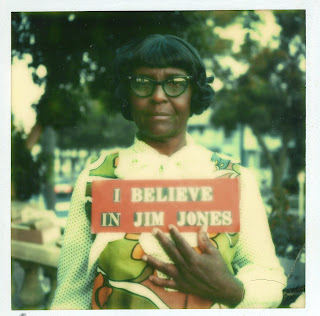 “Ain’t no white sky daddy gonna save you. Are we Black, proud and socialist? What are we?”

Why did a powerful white man utter these words and why did hundreds of black people, the majority of them black women, follow him to their deaths?

In 1978, People’s Temple, a multiracial church once at the forefront of progressive San Francisco politics, self-destructed in a Guyana jungle settlement named after its leader, the Reverend Jim Jones.

Fatally bonded by fear of racist annihilation, the community’s greatest symbol of crisis was the “White Night”; a rehearsal of revolutionary mass suicide that eventually led to the deaths of over 900 church members of all ages, genders and sexual orientations.

75% of those who died in Jonestown, and the majority of those in the Peoples Temple movement, were African American. But most of the literary portrayals of Jonestown have been by white people

Due in the summer of 2015, White Nights, Black Paradise focuses on three fictional black women characters who were part of the Peoples Temple movement but took radically different paths: Hy, a drifter and a spiritual seeker, her sister Taryn, an atheist with an inside line on the church’s money trail and Ida Lassiter, an activist whose watchdog journalism exposes the rot of corruption, sexual abuse, racism and violence in the church, fueling its exodus to Guyana.

White Nights, Black Paradise is a riveting story of complicity and resistance; loyalty and betrayal; black struggle and black sacrifice. It locates Peoples Temple and Jonestown in the shadow of the civil rights movement, Black Power, Second Wave feminism and the Great Migration. Recapturing black women’s voices, White Nights, Black Paradise explores their elusive quest for social justice, home and utopia. In so doing, the novel provides a complex window onto the epic flameout of a social movement that was not only an indictment of religious faith but of American democracy.