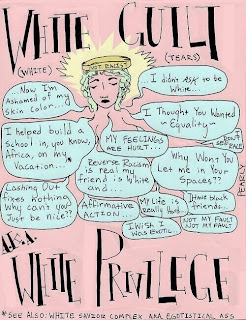 When reality TV fixture Omarosa Manigault claimed on the Bethenny Frankel show that white women could “walk around” being mediocre and still get rewarded with opportunities—while Black women had to be exceptional—the predominantly white female studio audience gasped, outraged by her “heresy”. Omarosa’s baggage as a tabloid lightening rod notwithstanding, her charge resonated deeply with many Black women. As a Black female Ph.D., much of my professional life has involved navigating and pushing back against a very specific, insidious brand of white female racism and paternalism. In the workplace and academia, this brand has consisted of the delicate nuances of power masquerading as benevolence, the kind that grins in one's face, understanding, sympathetic, worshipping at the cult of the legendarily “strong” Negress; appropriating blackness and using it as a weapon when real world decisions about hiring, promotion, and visibility are at stake. Over the years this display has come in various guises. The white master’s thesis advisor who said my writing was not “graduate school caliber”, then “retracted” her statement two years later when my thesis was given a departmental award. The white dissertation advisor who vehemently opposed my being given a “with distinction” commendation after my successful dissertation defense. The under-qualified white career bureaucrat/manager, armed with an undergraduate degree, who lied about my job performance on my annual evaluation. The white MIA coworker who breezed into the office whenever she felt like it, never published anything, never ran a consistent program yet got a promotion and wound up supervising me. The white British "I feel your pain" department chair at a prestigious private arts college who hired me to teach two token semesters of Women of Color in the U.S. classes then stood idly by while students of color were academically marginalized and shut out of financial aid.

In her article “Job Discrimination Lives On,” Margaret Kimberly writes “Even at the supervisory level apartheid is the order of the day. Black men and women are rarely hired to supervise white people. Black men supervise black men, black women supervise black women, and white men are in positions to manage everyone else.” The majority of my supervisorial “gatekeepers” have been white women. And since its inception, white women have been the biggest beneficiaries of affirmative action. Yet there are very few white feminist political commentators, activists, academics or pundits who vigorously champion affirmative action or make it an explicit focus of their public advocacy. According to the U.S. Labor Department “Six million women workers are in higher occupational classifications today than they would have been without affirmative action policies.” Of course, this isn't counting the “unofficial” legacy of white affirmative action which undergirds generations of white wealth accumulation, white residential segregation and white upward mobility in higher education. When Tea Party fascists to "moderate" whites, and even some "liberal" ones, savage affirmative action and lazy shiftless pathological Blacks the “unearned” advantages white women reap are never part of the diatribe. As has been well documented, white families and communities actively benefit from the job opportunities, business loans, government contracts, increased wages and private sector access that affirmative action has conferred onto white women. In her article “The Death of Affirmative Action,” University of Minnesota law professor Michele Goodwin notes that, “White women benefit significantly from state and federal affirmative-action programs in the private sector with hiring… and recent efforts to diversify boards of Fortune 500 companies…Prior to revamped admissions practices in direct response to civil-rights laws, women had much less possibility of success in suing a university to admit them.” In an article on the new Jim Crow of administrative hiring at Ivy League campuses, The Chronicle of Higher Education maintained that the number of (white) women in upper management has increased but representation of people of color remains stagnant.

As bell hooks argues in a recent critique of the Cheryl Sandberg Lean in phenomenon, Black feminists are especially rankled by white women’s shopworn white supremacist resistance to even identifying themselves as white. In corporate hyper-segregated sectors like the film industry, behind the camera stasis (vis-à-vis directing, casting, technical and production jobs) or in front of the camera “progress” for white women is routinely framed by white women entertainment journalists as a step back or a triumph for all women. It has only been recently that some white feminists, spurred by feminist of color criticism and high profile Twitter campaigns like that of #solidarityisforwhitewomen, have begun to own their privilege, if not the considerable capital that white femininity carries with it in the workplace, residential communities, the criminal justice system, and education.

Last month, when a white female student (the first ever) began participating in our Women’s Leadership Project (WLP) sessions, “Rene”, a Latina student, objected to her inclusion in a space for women of color. Without consulting my students beforehand, I had personally invited the white student to come to our meeting after she’d made insightful anti-racist comments about gender, sexuality and discrimination in a Teen Health workshop I was teaching. But Rene was right—WLP is supposed to be a safe space for women of color, a rare commodity even in schools that are predominantly African American and Latino. By unconsciously assuming “sisterhood”, and not consulting with students about the inclusion of a potential white “ally” in our group, I had failed to absorb the lessons of my own lived experience. In my rush to be inclusive I’d been exclusive, forgetting the very basis for the organization in a culture where white girls will never have to worry about being affirmed, reinforced and humanized on a playing field with the dark other.