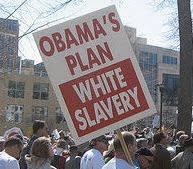 Back in 2009 when the first round of health care reform protests rippled across Middle America, open-carry gun fanatics set the tenor of the mob-ocracy to come; flaunting their weapons, exhorting white "patriots" to stockpile and evoking the specter of an Obama driven apocalypse. Now that the health care overhaul bill has passed the End of Days are upon us. During deliberations on the bill on the House floor a Republican lawmaker yelled “baby killer.” During a Tea Party protest in D.C. Congressman John Lewis was called the N-word and Congressman Barney Frank was lispingly labeled a “faggot.” At the same protest one enterprising man in the crowd hoisted a sign with the slur “Obama Plan, White Slavery” on it. After President Obama signed the legislation the offices of Democrats who supported the bill were vandalized.

Reveling in nightly PR infusions from the corporate lapdogs of American journalism, the freshly evangelized macho racist right has ensured that its charge of a socialist government expansion is now viewed as a “reasonable” critique of an overhaul that effectively concedes universal coverage to the insurance industry. Mining a deep strain of patriarchal backlash, the Tea Partiers have taken Christian fundamentalists’ language of “moral” panic and used it as a goad to a white nationalist uprising obsessed with imagery of enslavement.

The intersection of patriarchal resentment and so-called white cultural disenfranchisement has always animated conservative mass protest and activism. During the 19th and 20th centuries “white slavery” was the catch all term for moral panic about sex trafficking of white women. The association of the health care overhaul with this historical theme is a telling glimpse into the mind of the macho racist for whom sexual invasion is a metaphor for the imperiled white body as Nation. The specter of “enslaved” white people under the yoke of a black patriarch (ala the lawmaking blackface grotesques of Birth of a Nation) elicits visceral terror amongst white supremacists. True to their Confederate provenance, the Tea Partiers have begun to rally more vociferously for a return to States Rights. Before the ink was dry on the health care bill, 14 states lined up to contest its mandate that individuals’ purchase health care coverage. Back in February, during the Tea Party’s first convention, States Rights was the clarion call, with seminars on nullification—States Rights as trumping federal authority—and the heroism of Confederate president Jefferson Davis whipping up a secessionist frenzy.

Hijacking Christian fundamentalist propaganda, the Tea Partiers have succeeded in casting the “incursions” of the federal government as a grave moral transgression. In the misogynist hysteria over federal funding for abortion it did not matter that the Hyde Amendment was unequivocal on funding restrictions for the procedure. And in the thuggish sound and fury over “socialism” it did not matter that the final health care bill merely opened the gateway for competition amongst health care insurers, rather than single payer or even a public option. So-called nationalized health care is an affront to white Americans’ god given right not to subsidize minority leeches who exploit decent taxpayers with abortions, drug abuse treatment and emergency room visits.

Progressive organizations such as the Color of Change and Move On.org have called on GOP leaders like Republican National Committee chair Michael Steele to publicly denounce the Tea Party violence. Fat chance when the GOP is all but stage managing the Tea Party “movement.” Cruising into the midterm elections House Negro Steele and the GOP operatives are no doubt licking their chops at the media blitz, banking on Independent voters’ “buyers’ remorse” to sweep Obama and his health reform allies out of office. Playing Orwell’s O’Brien to Middle America’s Winston Smith from the novel 1984, the GOP knows that it can hold up four fingers and seduce the white electorate into believing there are five.

Sikivu Hutchinson is the editor of blackfemlens.org and the author of the forthcoming Moral Combat: Black Atheism, Gender Politics and Secular America.
Posted by Sikivu at 9:22 AM